Until recent years, the danger that concussions pose to football players was under-recognized and underreported — in large part because the National Football League (NFL) spent years suppressing the link between playing football and damaged brains.

The findings from a study published last week in the Journal of the American Medical Association (JAMA) certainly appear to underscore that danger. Researchers at Boston University examined the brains of 202 former football players and found that almost all displayed evidence of chronic traumatic encephalopathy (CTE), a debilitating brain disease associated with repeated head blows.

Specifically, the study found signs of CTE in 177 of the 202 brains: 110 of 111 NFL players, 48 of 53 college players, nine of 14 semi-professional players, seven of eight Canadian Football League players and three of 14 high school players.

Those are disturbing numbers. They apparently caused at least one NFL player — 26-year-old Baltimore Ravens offensive linesman John Urshel — to abruptly retire last Thursday. During the off-season, Urshel has been pursuing a Ph.D. in mathematics at the Massachusetts Institute of Technology — a career he  believes would be at risk if he continues to play football.

But, as Dr. Saurabh Jha, a radiologist at the University of Pennsylvania, points out in a provocative commentary published on the Minnesota-based HealthNewsReview website, the JAMA study’s findings do not mean, as many headlines reported, that “99 percent of NFL players had CTE.”

“As with other under-recognized entities that become the focus of media attention, there’s a risk the pendulum swings to the other extreme and CTE becomes over-recognized and over-diagnosed,” he adds.

CTE, which can be diagnosed only with a brain autopsy, is a complex condition that shares pathological and clinical symptoms with other neurological and psychiatric disorders. That complexity, says Jha, leads to uncertainties.

The uncertainty with CTE doesn’t mean CTE doesn’t exist. Rather, it means it’s difficult determining the true prevalence of CTE. Researchers are using advanced neuroimaging such as diffusion tensor imaging to diagnose and predict CTE. But imaging is only as good as the gold standard for the diagnosis of CTE. And if the gold standard for CTE is wobbly, or uncertain, so will be the diagnostic and predictive tools for CTE.

The true prevalence of CTE is the crucial question. If the prevalence of CTE truly is 99% — that is, 99% of NFL players will develop clinically significant CTE (meaning they develop symptoms of impairment during their lifetime), the implications are profound. But we must remember that clinically significant CTE is not the same as autopsy-confirmed CTE (which indicates brains showing pathological evidence of the disease after death, from individuals who may or may not have had symptoms while alive).

A potential for bias

One of Jha’s concerns about the JAMA study is the potential for selection bias:

The study looked at the prevalence of CTE in a brain bank. Brains were donated by families of football players. While the donation could be motivated by a genuine desire to advance science, arguably it could have also been motivated by symptoms of the deceased — i.e. a suspicion of CTE. This is a biased sample and extrapolating the numbers to the population of all football players is neglecting the denominator — a rookie statistical error.

Jha says he would not shed any tears if football were banned. But he insists that CTE’s association with the sport is more nuanced than is often portrayed — at least, according to what we currently know. 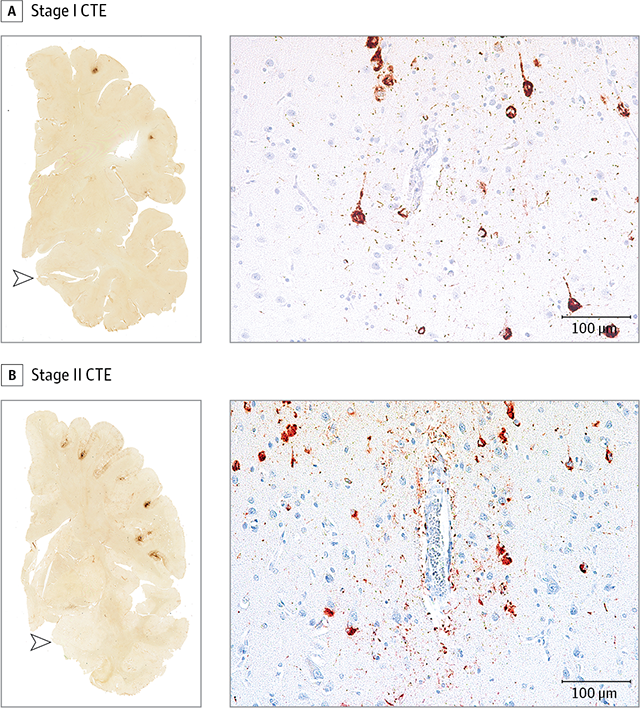 JAMA
Researchers at Boston University examined the brains of 202 former football players and found that almost all displayed evidence of chronic traumatic encephalopathy.

We must, therefore, be as careful about not overstating the problem as we are about not understating it.

“It’s easy for CTE to touch our inner sanctum of justice because of the narrative it induces — helpless youth from minority communities goaded by the greedy NFL into performing like gladiators for rich sponsors and the masses,” writes Jha. “When there’s such a large exchange of money, as there is in the NFL, it’s easy for our rage to ignore the uncertainty surrounding the science.”

“And it is precisely when our rage is so easily conscripted that our skepticism and demand for rigor are most vital,” he adds.

FMI: You can read Jha’s commentary in full on the HealthNewsReview website.

Football and brain damage: the importance of nuance in assessing the risk