One in three cases of dementia might be prevented through the reduction of certain lifestyle-related risk factors, according to a report compiled by an international team of 24 researchers and published today in the Lancet.

Might is the operative word here, for the findings in the report are based on statistical modeling and thus are only theoretical. There’s no solid proof that any of the preventive strategies cited in the report have a direct effect on lowering the risk of dementia.

Still, the strategies come with plenty of other health benefits, so there would be little downside to adopting them.

This report, which was released in conjunction with this year’s Alzheimer’s Association International Conference in London, also marks a major change in thinking among dementia experts.

“With several failed drug trials and without full understanding of the etiology of Alzheimer’s disease for developing better therapeutics, dementia specialists have shifted their focus to prevention,” writes MedPage Today editor Kristina Fiore, who is attending the meeting.

It’s estimated that, globally, 47 million people were living with dementia in 2015 — a number that is expected to triple by 2050.

Here are the nine modifiable risk factors identified in the Lancet report — and the percentage of dementia-related risk attributed to them. The report found that these factors make an impact at different stages of life — an impact that becomes cumulative as the years pass.

Together, those factors contribute to 35 percent of the risk of dementia — and all are potentially preventable, the authors of the report point out.

The researchers said they did not have enough data to determine how diet and alcohol factor into the risk of dementia, although they believe both are important.

As the report explains, current research suggests that although dementia is diagnosed late in life, the changes in the brain that lead to it begin years earlier.

That’s where the education risk factor comes in, they say. “Low educational level is thought to result in vulnerability to cognitive decline because it results in less cognitive reserve, which enables people to maintain function despite brain pathology,” the researchers write.

“We do not yet know whether education after secondary school is additionally protective,” they add.

Hearing loss may have a similar negative effect on cognitive reserves. Such a loss may “add to the cognitive load of a vulnerable brain” in ways that contribute to cognitive decline — perhaps through social isolation and depression, the researchers explain.

Again, research suggests only an association, not a direct cause-and-effect, between these factors and the development of dementia. 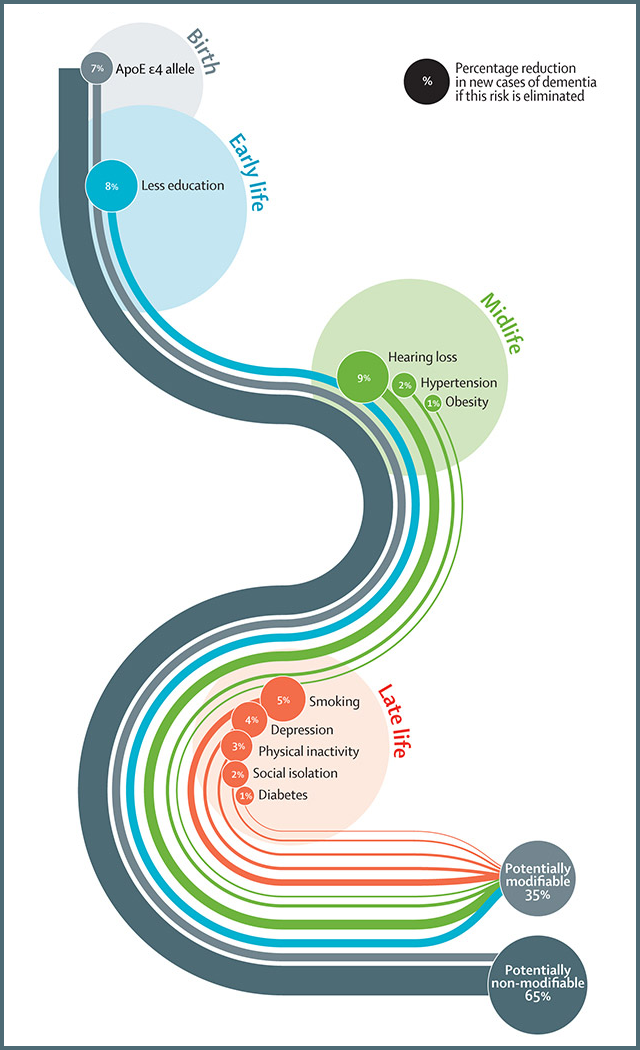 Last month, a report by the National Academies of Science, Engineering, and Medicine found that three lifestyle interventions — cognitive training, the management of high blood pressure and increased physical activity — are associated with a delay in the onset of dementia. But the authors of that report cautiously stated that although the evidence in favor of those interventions was “encouraging,” it was also “inconclusive.”

What may be the best preventive evidence to date is a 2015 Finnish study known as the FINGER (Finnish Geriatric Intervention Study to Prevent Cognitive Impairment and Disability) trial. It found that older people who received a comprehensive mix of intensive lifestyle interventions — a brain-healthy diet, regular exercise (both weight training and aerobic activities, such as walking) and special types of cognitive training — scored significantly higher on a variety of cognitive tests than people who did not receive the interventions.

On Wednesday, the Alzheimer’s Association announced that it would begin a similar study next year in the United States.

“Not everyone will be able to make changes; some changes will not make a difference and some risks of dementia are genetic and not currently modifiable,” write the authors of the Lancet report. “Nonetheless, delaying dementia for some years for even a small percentage of people would be an enormous achievement and would enable many more people to reach the end of life without developing dementia.”

FMI: You can read the full report on the Lancet’s website.