Some politicians, pundits — and, presumably, members of the public — like to blame sick people for their poor health.

As Rep. Mo Brooks, R-Alabama, famously — or infamously — stated while arguing for his party’s failed replacement of the Affordable Care Act, “[Trumpcare] will allow insurance companies to require people who have higher health care costs to contribute more to the insurance pool that helps offset all these costs, thereby reducing the cost to those people who lead good lives; they’re healthy, they’ve done the things to keep their bodies healthy.”

I’m not sure what Brooks means by “doing things to keep their bodies healthy,” but if he means they don’t smoke, exercise regularly, eat plenty of fruits and veggies, and maintain a healthy weight (the four most basic tenets of preventive health), well, plenty of people who do all those things develop chronic and even life-threatening illnesses. Having healthy habits only reduces your risk of becoming seriously ill. It doesn’t guarantee anything.

Brooks’ statement also seems to presume that “keeping the body healthy” is an equally doable task for everyone. And that is simply not the case. Not everyone has easy access to opportunities that can help them reduce their risk of disease.

A strong predictor of disease

That reality is underscored in a new study on food insecurity and health released this week by the U.S. Department of Agriculture (USDA). It found that low food security — difficulty with consistently obtaining access to adequate amounts of healthy, affordable food — is associated among working-age adults with an increased risk of 10 of the most common, costly and preventable chronic conditions: high blood pressure (hypertension), coronary heart disease (CHD), hepatitis, stroke, cancer, arthritis, chronic obstructive pulmonary disease (COPD) and kidney disease.

Poor nutrition is believed to play a direct role in many of those conditions.

Furthermore, as food insecurity worsens, the likelihood of having each of these conditions increases.

The USDA study used five years of data (2011-2015) from the National Health Interview Survey, which includes a demographically representative sample of about 40,000 U.S. households. Based on answers to questions designed to assess food security, the USDA researchers were able to categorize each of the surveyed households as having either high, marginal, low or very low food security. 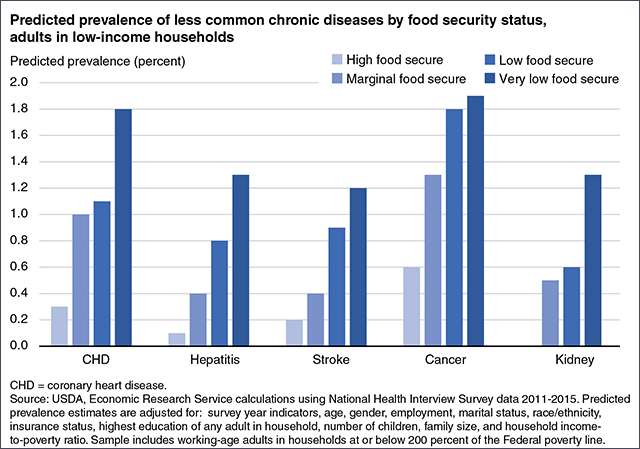 Here are some other findings from the study:

This particular study didn’t examine why food insecurity is linked to poorer health outcomes, but previous research has found that low-income households often have to make trade-offs between food and other health-related necessities, such as buying medications.

Being able to easily access — and afford — healthy foods are also factors. As a 2012 study of food insecurity in the Twin Cities reported, food-insecure households are significantly more likely to serve processed and sugar-laden foods to their families and less likely to serve fresh fruits and vegetables.

The reason cited by study’s participants: good-quality fresh produce was too expensive or too difficult to find in their neighborhood to purchase regularly. 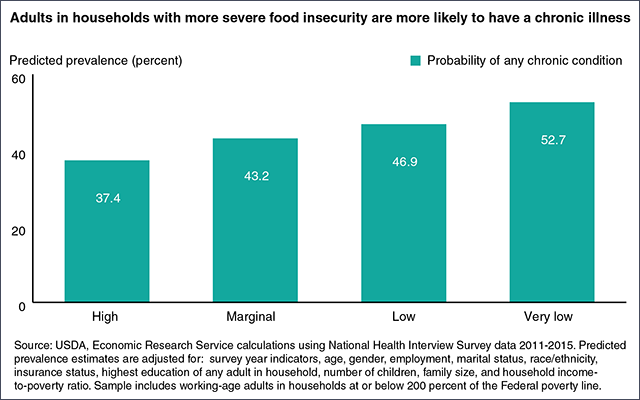 The USDA study reports only a correlation between food insecurity and a greater risk of chronic disease. It doesn’t prove there is a direct link between the two. Other factors are certainly also involved.

Still, it’s clear from this and other research that we need to stop blaming people for being sick and start finding ways — on the societal, not just on the individual level — to help them be healthier.

FMI: You can read the USDA report in full on that agency’s website.