The mental health of U.S.-born children of unauthorized immigrants dramatically improves when they are protected from the stress of worrying that their parents may be deported, a study published online last Thursday in the journal Science reports.

The study’s findings underscore the widespread and long-term impact that immigration policies have on health — not just for individual immigrants, but also for their families and for the broader American society.

As background information in the study points out, mental health disorders that originate in childhood are associated with long-term health issues, including depression, heart disease, obesity and substance abuse, as well as with lower levels of education and a greater dependence on welfare and social programs.

In addition, mental illness is the most costly illness for children in the United States, accounting for $13.8 billion in health care expenditures in 2011 alone.

The study’s findings are also particularly pertinent — and poignant — today, when President Trump is expected to announce his decision about whether to end Deferred Action for Childhood Arrivals (DACA), an Obama-era program that protects unauthorized immigrants born on or after June 16, 1981, from deportation.

About 4 million U.S. children  — including at least 200,000 children of DACA parents — have a mother or father (or both) who is an unauthorized immigrant. Research has shown that fear of their parents’ deportation is a significant source of stress for these children.

Assessing the intergenerational effects of immigration status on stress — and health — is challenging, however. One major problem is separating that specific stress from others caused by the economic and cultural barriers commonly experienced by immigrant families.

Unauthorized immigrants are also reluctant to identify themselves, and thus are excluded from many surveys and other databases.

To overcome these problems, the authors of the current study used research from the Emergency Medicaid program in Oregon, which offers pregnancy services to immigrant women who do not qualify for traditional Medicaid. The children born to the women in this program qualify for Medicaid, however, because they are U.S. citizens. The researchers could then use that data to track the children’s medical history.

The other key element of this study involved the DACA age cutoff: June 16, 1981. The researchers selected 5,653 mothers born just before and after that date for their study. These two groups of women were essentially identical — except for whether or not they qualified for DACA’s protections.

A total of 8,610 children were born to the women in the study between 2003 and 2015. The researchers studied those children’s medical histories, looking for diagnoses of two categories of mental disorders. One category — anxiety disorders — is thought to be influenced by genetics as well as by external causes. The other category — adjustment disorders — is believed triggered by external stressors, such as the fear of losing a parent.  The average age at which these diagnoses were first made was 6.7 years.

When a comparison was made between the two groups of children, the findings were stark. Before DACA, the two groups were diagnosed with stress-related disorders at about the same rate: 7.8 percent. That changed dramatically, however, after DACA — but only for the group of children whose mothers were eligible for the program. The rate at which they were diagnosed with adjustment or anxiety disorders dropped by more than half — to 3.3 percent.

The greatest drop was in adjustment disorders — a finding that suggests that the improvement in the mental health of the children of the DACA parents was related to a change in their stress levels rather than to some internal factors. 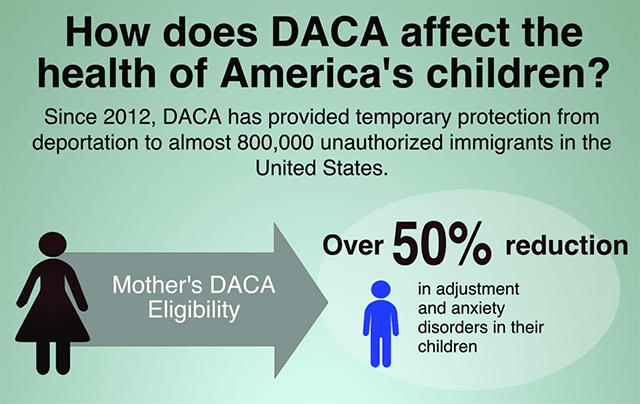 “Our results imply that expanding deferred action, or providing more permanent protection, to the millions of unauthorized immigrant parents who do not meet the current DACA eligibility criteria could equally promote the well-being of their children,” said Duncan Lawrenc, one of the study’s authors and the executive director of the Stanford Immigration Policy Lab, in a released statement.

“This would have important implications for this next generation of American citizens,” he added.

FMI: You can read the study in full on Science’s website.