After declining steadily for more than four decades, the rate at which Americans are dying from stroke has stalled, according to a troubling report issued last week by the Centers for Disease Control and Prevention (CDC).

This trend was observed not only in the “stroke belt” of the South, but across the country. Three out of four states — including Minnesota — have seen the progress they’ve made in reducing stroke deaths stall or reverse in recent years.

The CDC researchers estimate that an additional 32,000 Americans may have died of stroke between 2013 and 2015 because the decline in the disease’s death rate has stalled.

“These findings are a wakeup call,” said Dr. Brenda Fitzgerald, director of the CDC, in a released statement. “We know the majority of strokes are preventable, and we must improve our efforts to reduce America’s stroke burden.”

Just a decade ago — in 2007 — stroke was the third-leading cause of death in the United States (a position it held since the late 1930s). It dropped to fifth place in 2013. Despite that progress, stroke remains a deadly and disabling disease. Each year, nearly 800,000 Americans have a stroke — approximately one every 40 seconds.  About 140,000 of those people die, and millions more are left disabled. In fact, stroke is the leading cause of serious, long-term adult disability in the U.S.

Yet, health experts believe 80 percent of strokes are preventable.

For the study, CDC researchers analyzed stroke data from the National Center for Health Statistics for people aged 35 and older (who experience 99 percent of all strokes). They looked for recent trends in stroke death rates by age, gender, race/ ethnicity and state.

They found that the national rate of stroke deaths dropped 38 percent between 2000 and 2015 (from 118.4 to 73.3 strokes per 100,000 persons). But they also found that the decline stalled starting in 2013. In fact, the stroke death rate rose 2.5 percent per year during 2013-2015 — a finding the researchers determined was statistically insignificant as an increase, but not as an indicator of a change in the previous downward trend. 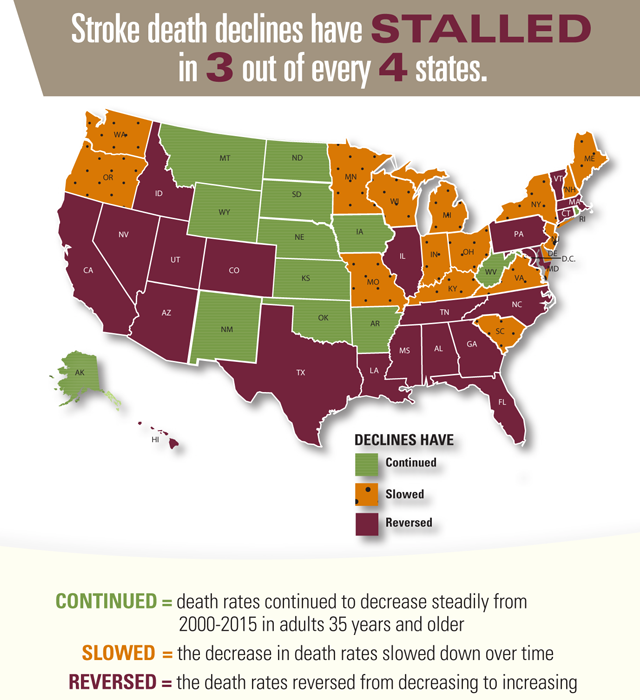 Here are other key findings from the study:

Risk rising among all ages

This study did not include people under the age of 35, but other research published earlier this year found that the incidence of stroke has jumped dramatically among young adults aged 18 to 34, particularly among those living in the Midwest or West.

Health officials believe the reason more young people are having strokes and why the decline in stroke death rates among older adults has appeared to stall is the same: an increasing number of Americans of all ages have developed major risk factors for stroke. The leading culprits are obesity, type 2 diabetes, high blood pressure, poor diet and physical inactivity.

Again, most strokes are preventable. The key is to reduce your risk factors — by adopting a healthy lifestyle and, if necessary, by taking medications.

You can start taking those actions no matter what your age.

FMI: The CDC study was published in Morbidity and Mortality Weekly Report, where it can be read in full. The CDC also offers plenty of detailed information on its website about how to prevent a stroke. If you like your information in easier to digest slices, you may find Harvard University’s quick-but-useful summary of “7 things you can do to prevent a stroke” a useful place to start.