Minnesota has had 27 confirmed reports of rabies in animals so far in 2017 — less than half of the 55 cases that were reported in 2016, according to the Minnesota Department of Health.

But Minnesotans, whether they live in rural or urban areas of the state, need to remain vigilant about how to protect themselves from a rabies-infected animal — and what to do if any animal bites them, health officials warn.

“Although the number of infections in the United States has decreased significantly over the years, the virus is still present and it is deadly,” said Courtney Wheeler, a senior veterinarian with the Minnesota Board of Animal Health, in an interview with MinnPost.

Fortunately, a vaccine exists that can keep the virus from spreading beyond the bite wound. But it must be administered soon after the injury has occurred.

In the United States, one to five people die of rabies each year. Minnesota hasn’t had such a death since 2007, when a 46-year-old man in Monticello failed to seek immediate medical care after being bitten by a bat in his cabin.

Rabies deaths are rare in the U.S. thanks to the widespread use of preventive vaccines in domestic animals, comprehensive animal control and public awareness efforts. Globally, however, the disease claims an estimated 59,000 lives each year, mostly in Africa and Asia. Half the deaths occur in children under the age of 15.

“Any animal that has been infected with the rabies virus has the potential to pass it on to humans,” said Wheeler.

The animals most likely to be carriers of the rabies virus in Minnesota, however, are bats and skunks, she added. Of the 55 confirmed cases of animal rabies in the state last year, 37 involved bats and 10 involved skunks. Cattle (4), cats (2), foxes (1) and horses (1) made up the remainder of the cases.

The 27 confirmed cases this year have involved 15 bats, eight skunks, one cat, one fox and one raccoon, said Wheeler.

When livestock and domestic pets in Minnesota develop rabies, it is often due to being bitten by an infected bat or skunk. This past summer, a horse in Benton County and a kitten in Pennington County were diagnosed with rabies. The owners of both those animals recalled seeing a skunk on their property a week or two before the animals began showing symptoms.

In August, a dead Stearns County raccoon was found to have rabies — the first raccoon to test positive for the virus in Minneosta since 1993.

“But the raccoon was actually infected with a skunk variant of the virus,” said Wheeler. 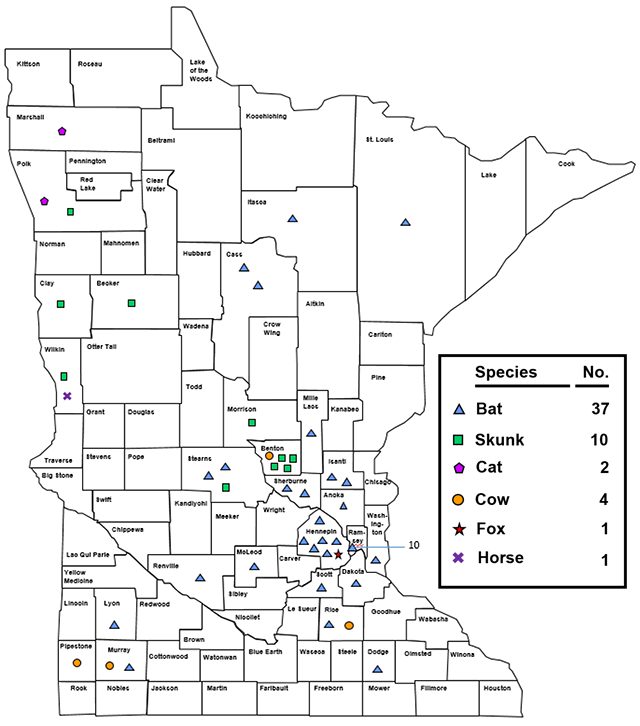 Most people believe that animals with rabies will drool, appear highly aggressive and agitated, and attack at the smallest provocation (or at no provocation at all). But that type of infection — dubbed “furious” rabies by the professionals — is present in only some animals. It’s also quite common for animals with rabies to appear quiet, disoriented, shy and easily approachable — a form known as paralytic or “dumb” rabies.

For that reason, no one should approach an unfamiliar or wild animal, even if it looks “tame,” said Wheeler. (Be sure to teach your children this rule, too.) And if an animal is acting strangely, call your local animal control.

Wheeler and her MDH colleagues recommend these additional precautions:

Finally, if an animal — any animal — bites you, “flush the wound with soap and water and then go see a physician,” said Wheeler.

Don’t wait until symptoms appear. By then, it may be too late.

FMI: For more information about rabies, go to the Minnesota Department of Health’s website. The department also encourages Minnesotans to contact them at 651-201-5414 with any questions or concerns regarding animal bites or exposures to bats.