Minnesota was one of four states to see its adult obesity rate increase in 2016, according to the 2017 “State of Obesity” report released Thursday by Trust for America’s Health and the Robert Wood Johnson Foundation.

The share of the state’s adults who were obese in 2016 was 27.8 percent — up from 26.1 percent in 2015. That rise means Minnesota now ranks 34th (rather than 39th) for adult obesity among all states (and the District of Columbia).

The three other states whose obesity rates rose last year were Colorado, Washington and West Virginia.  Only Kansas saw a decrease, although its rate (31.2 percent) is higher than Minnesota’s. Rates remained essentially stable in the rest of the states.

Colorado had the lowest rate (22.3 percent), while West Virginia had the highest (37.7 percent).

Data used for the report comes for the Center for Disease Control and Prevention. Obesity was determined by body mass index (BMI), a measure of height and weight. Having a BMI of 30 or greater is considered obese.

Although Minnesota’s new obesity rate is disappointing, the report offers some slightly encouraging news: Its overall findings suggest that, after years of rapid increases, obesity rates in the U.S. are starting to slow and perhaps (in some places) decline.

Getting obesity rates down is a major goal of public health officials, both here in Minnesota and around the country. Obesity raises the risk for heart disease, type 2 diabetes, certain cancers, arthritis and other chronic conditions. It also costs the country up to $210 billion annually in health-related costs.

“Obesity rates are still far too high, but the progress we’ve seen in recent years is real and it’s encouraging,” said Dr. Richard Besser, president and CEO of the Robert Wood Johnson Foundation, in a released statement. “That progress could be easily undermined if leaders and policymakers at all levels don’t continue to prioritize efforts that help all Americans lead healthier lives.” 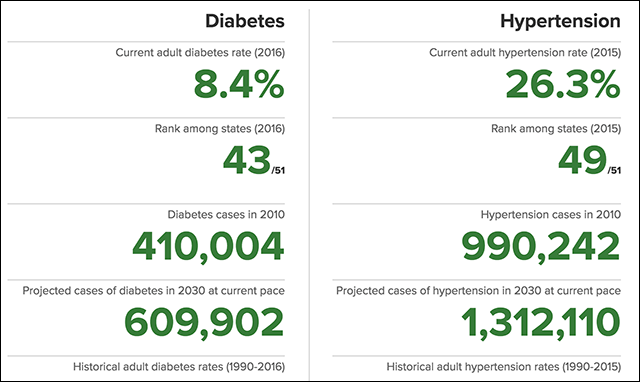 Here are some other Minnesota numbers from the report:

This year’s report also makes note of each state’s efforts on more than two-dozen policies aimed at preventing obesity. Some of the policies the report says Minnesota falls short on include setting limits for screen time in early childhood education settings; requiring elementary, middle and high school students to participate in a minimum amount of physical education; and requiring recess in elementary schools.

For more information: You can read the interactive “State of Obesity” report — including its “brief” on Minnesota — online.