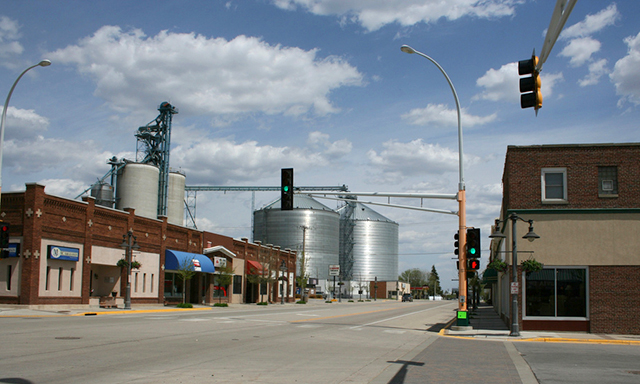 Creative Commons/davef3138
More than half of rural women, compared to 7 percent of urban women, must spend at least 30 minutes to reach the nearest hospital with an obstetrics unit.

The percent of rural counties in the United States without hospital obstetric units increased by about 50 percent during the past decade — a trend that means about half of rural counties no longer have a hospital in which women can give birth, according to a University of Minnesota study published Tuesday in the journal Health Affairs.

The study also found that the decline in hospital-based obstetric services tended to occur in the most geographically isolated areas of the country, as well as in counties with greater percentages of women who are black, poor and ineligible for Medicaid (due to less generous state Medicaid eligibility thresholds).

These findings are troubling, for it means that reproductive-age women living in rural areas — and their babies — are at greater risk of pregnancy- and birth-related complications than previously reported.

“Data shows that if you have to travel more than hour [to a hospital to give birth], you are a higher risk of the baby being in the intensive care unit and even of infant death,” said Katy Kozhimannil, the study’s senior author and an associate professor of health policy and management at the U of M, in an interview with MinnPost.

As Kozhimannil and her colleagues point out in their study, more than 18 million women of reproductive age live in rural counties, and about 500,000 give birth each year in rural hospitals. Medicaid pays for almost half of all births in the U.S., a proportion that is even greater in rural areas.

Past research has found a wide range of significant health disparities between women living in rural regions and those living in large, urban settings. Rural women have, for example, higher rates of unintentional injuries, obesity and deaths from heart disease and suicide. They are also less likely to receive preventive screening for breast and cervical cancer.

Rural areas also have higher rates of childbirth-related hemorrhages — and higher rates of maternal and infant deaths — rates that may be at least partly caused by the longer distances rural women must travel to access hospital obstetric care.

More than half of rural women, compared to 7 percent of urban women, must spend at least 30 minutes to reach the nearest hospital with an obstetrics unit, according to background information in the U of M study.

“All maternal and infant deaths are tragic; those related to impaired access to care are abhorrent,” Kozhimannil and her colleagues write.

For their study, the researchers used data collected from five national data sources for the years 2004 to 2014. They identified 1,249 hospitals in 1,086 rural counties that offered obstetric services in 2004. Over the next 10 years, 179 of those counties lost all their obstetric services.

That meant that the percentage of rural counties in the U.S. without hospital-based obstetric services climbed from 45 percent in 2004 to 54 percent a decade later.

It also meant that 2.4 million women of reproductive age were living in counties without obstetric services in 2014. 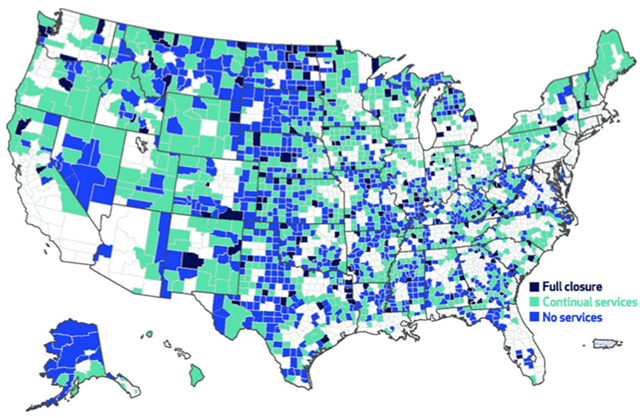 A deeper dive into the data revealed that the loss of those services was greatest (jumping from 59 percent to 69 percent) among “noncore” rural counties not adjacent to an urban county, as well as among counties with higher percentages of black women and residents living in poverty.

“The increasing loss of hospital-based obstetric services in rural counties could exacerbate existing racial and income disparities in obstetric care, thereby increasing concerns about maternal and infant outcomes in vulnerable communities,” write Kozhimannil and her colleagues.

In Minnesota, 78.3 percent of the state’s 60 rural counties had hospital obstetric services in 2004, according to a U of M report released earlier this year. By 2014, that share had dropped to 66.7 percent — and even further, to 60.5 percent, among the state’s non-core counties.

Hospital obstetric services are unlikely to return to the rural counties that have lost them, primarily because the number of births in those counties is often insufficient to sustain them. It’s also challenging to get specialist doctors, such as obstetricians, to live in rural areas. 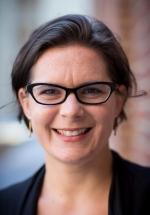 “Not every hospital can feasibly run an obstetrics clinic,” said Kozhimannil.

But there are ways that state policymakers can help rural communities meet the obstetric needs of their residents, she says. One is by using telemedicine technologies to give women in rural areas immediate access to consultations with specialty health care providers during pregnancy and childbirth. Another is by subsidizing transportation costs for high-risk pregnant women living in rural areas.

Expanding, rather than contracting, access to Medicaid would also help. The U of M study found that rural counties in states with more generous Medicaid programs — ones that had higher income eligibility limits for pregnant women — were less likely to lose hospital-based obstetric services.

FMI: You can read the full study on the website of the U of M’s Rural Health Research Center.

More than half of U.S. rural counties have no hospital where women can give birth, U of M study finds