Excess body fat is associated with an increased risk of 13 types of cancer, and those cancers account for four out of 10 cancers diagnosed in the United States each year, according to a new Vital Signs report from the Centers for Disease Control and Prevention (CDC).

In 2014, about 630,000 Americans were diagnosed with one of these weight-related cancers, the report says.

The CDC researchers also note that although the overall rate of new cancer diagnoses has fallen since the 1990s, diagnoses of cancers associated with being overweight or obese have risen.

“The findings emphasize the importance of intensifying nationwide efforts to prevent and treat overweight and obesity,” the researchers write.

Many Americans unaware of connection

As just about everybody knows by now, the United States — and much of the world — is in the midst of an epidemic of excess weight. About one third of U.S. adults are overweight (defined as a body mass index, or BMI, of 25 to 29.9), and another third are obese (a BMI of 30 or greater).

Yet, surveys have shown that only about half of Americans are aware that excess weight has been linked to an increased risk of cancer.

The new report, which was published Tuesday, is based on data from the United States Cancer Statistics for 2014. The CDC researchers used that data to assess incidence trends from 2005 to 2014 for the 13 cancers for which excess weight is a known risk factor.

Those cancers are meningioma (cancer in the tissue covering the brain and spinal cord), multiple myeloma (a type of blood cancer), adenocarcinoma of the esophagus, postmenopausal breast cancer, and cancers of the colon and rectum, endometrium, gallbladder, upper stomach (gastric cardia), kidney, liver, ovary, pancreas and thyroid.

To be clear, however, although these 13 cancers are more likely to occur in people who are overweight or obese, that doesn’t mean having excess weight causes them. Scientists still do not know what is behind the association. 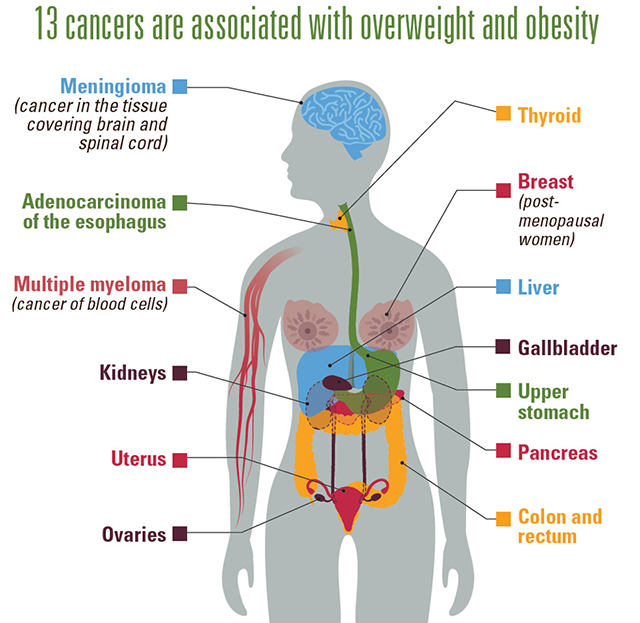 Here are some of the key findings from the Vital Signs report:

“As an oncologist, when people ask me if there’s a cure for cancer, I say, ‘Yes, good health is the best prescription for preventing chronic diseases, including cancer,” said Dr. Lisa Richardson, director of the CDC’s Division of Cancer Prevention and Control, in a released statement. “What that means to health care providers like me is helping people to have the information they need to make healthy choices where they live, work, learn and play.”

Richardson and her CDC colleagues recommend that individuals:

FMI: The Vital Signs report was published in the Oct. 3 edition of the CDC’s Morbidity and Mortality Weekly Report (MMWR), where it can be read in full.