People living in rural areas of the United States are at greater risk of suicide than those living in urban areas, according to a new study from researchers at the Centers for Disease Control and Prevention (CDC).

Specifically, the study found that the suicide rate in rural counties is almost a third higher than the rate in large metropolitan areas.

This finding supports another CDC study published earlier this year that reported a widening gap in suicide rates between rural and urban areas over the past two decades. The new study, however, takes a more in-depth look at this trend by analyzing it by gender, race, ethnicity, age and method of suicide.

Suicide research has taken on an even greater sense of urgency in recent years. The national suicide rate has climbed by more than 20 percent during the past two decades. Suicide is now the 10th leading cause of death in the United States. More than 44,000 Americans take their lives each year.

Although those numbers are tragically high, they probably don’t reflect the true scope of the problem. Experts believe the increase in the U.S. suicide rate since 2000 is much greater than reported because of an underreporting of opioid-related suicides.

For the current study, the CDC researchers used county-level death certificate data collected from 50 states and the District of Columbia from 2001 through 2015.

The data also revealed that while large cities started seeing substantial increases in their annual suicide rates after 2005, such increases began in rural areas in 2007 — in the aftermath of the Great Recession. The CDC researchers point out that the kind of economic consequences triggered by recessions — housing foreclosures, unemployment and poverty — tend to have “greater prevalence” in rural areas and, therefore, were likely a contributor to the rural/urban differences in suicide rates. 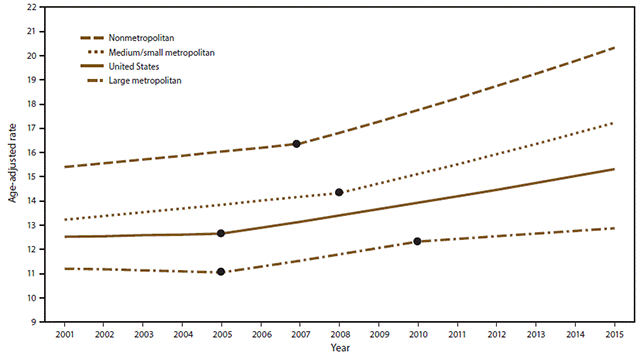 Here are some additional findings from the study:

“The trends in suicide rates by sex, race, ethnicity, age and mechanism that we see in the general population are magnified in rural areas,” said James Mercy, director of the CDC’s Division of Violence Prevention, in a released statement.

“The report underscores the need for suicide prevention strategies that are tailored specifically for these communities,” he adds.

CDC: Risk of suicide is greater in rural areas than in large cities