Feeling stressed and worried about the country? And is that stress keeping you up at night?

Almost two-thirds of Americans — 63 percent — say the future of the country is a significant source of stress in their lives, according to this year’s “Stress in America” survey released Wednesday by the American Psychological Association (APA).

Indeed, a majority — 59 percent — of the survey’s respondents said this is the “lowest point in our nation’s history that they can remember.” And that feeling spanned all generations, including people who lived through World War II, the Cuban Missile Crisis, the assassinations of President John F. Kennedy and the Rev. Martin Luther King Jr., the Vietnam War, as well as the more recent Sept. 11 terrorist attacks.

Being significantly stressed by worries concerning the future of the country also crossed all political lines, although it was cited more often by Democrats (73 percent) than by Republicans (56 percent) and independents (59 percent).

“We’re seeing significant stress transcending party lines,” said Arthur Evans, Jr., the APA’s chief executive officer, in a released statement. “The uncertainty and unpredictability tied to the future of our nation is affecting the health and well-being of many Americans in a way that feels unique to this period in recent history.”

Not surprisingly, the survey also found that Americans are conflicted about keeping up with the news — because of the stress it can cause. Most of the survey’s respondents (95 percent) said they follow the news regularly, but 56 percent said it aggravated their stress.

And 72 percent said they believed the media “blows things out of proportion.”

The APA has been conducting its “Stress in America” survey since 2007. This year’s survey, which involved 3,340 adults aged 18 and older, was conducted last August. The survey’s data was weighted to proportionally reflect the participants’ demographics (age, gender, race/ethnicity, education, region and household income) in the U.S. population. 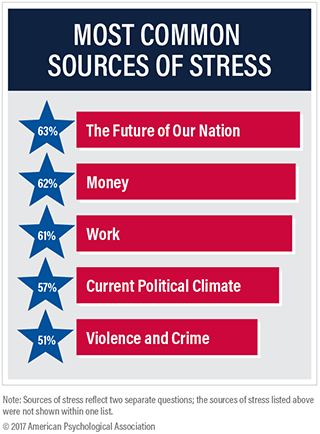 This was the first year that the survey had questions that asked participants about their worries regarding the future of the country, so there’s no way of knowing whether more Americans are stressed about that concern today than they were in the past. Last year, however, a majority of the survey’s respondents’ (52 percent) cited the presidential election as a significant source of stress for them.

Overall, Americans’ stress level in 2017 is, on average, the same as it was in 2016: 4.8 on a 10-point scale. But this year, Americans are more likely to report symptoms of stress, which include anxiety, anger and fatigue, the survey found.

Here are some other interesting findings from this year’s survey:

The survey also found that stress appears to be keeping more Americans up at night than in the past.  Almost half (45 percent) of respondents in the 2017 survey said they had spent at least one night in the previous month lying awake at night, worrying — up from 40 percent a year earlier.

But the survey also discovered that many Americans are acting on their worries about the future of the country in a positive way. 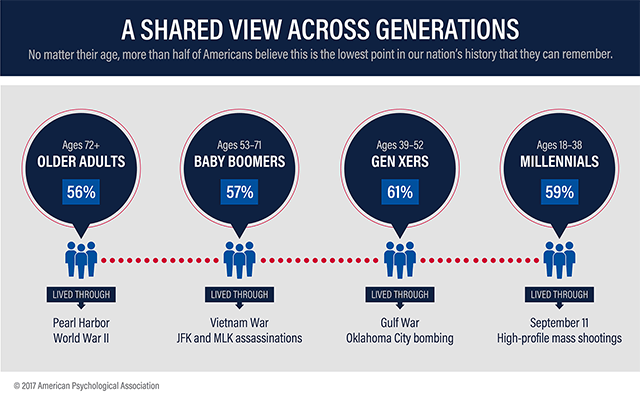 “Half of those surveyed (51 percent) express that the state of our nation has compelled them to volunteer or otherwise support causes they value,” the APA’s report on the 2017 “Stress in America” survey notes, “and 59 percent have taken some form of action in the past year to address the issues of concern to them, including signing a petition (28 percent) and boycotting a company or product due to its social or political views or actions (15 percent).”

“Despite the divisiveness in many areas,” the report adds, “most Americans (87 percent) can agree on at least one thing: a desire for people to take a deep breath and calm down.”

FMI: The 2017 “Stress in America” survey can be read in full on the APA’s website.

Two-thirds of Americans are significantly stressed about the country’s future, survey finds