The United Health Foundation released its 28th annual “America’s Health Rankings” report, in which it grades all 50 states and the District of Columbia by a wide variety of health-related measures, including obesity, smoking, air pollution and child poverty.

Minnesota dropped from fourth to sixth place in the 2017 rankings, which puts us back to where we were in 2014.

The state’s major “challenges” are a high prevalence of excessive alcohol drinking, a high incidence of whooping cough (pertussis) and low per capita public health funding.

First place went — for the first time — to Massachusetts.  Also “beating” us were Hawaii, Vermont, Utah and Connecticut.

One of Minnesota’s neighboring states, North Dakota, experienced the largest drop in the rankings, falling seven places to number 18. Lower measures for smoking, salmonella food poisoning and immunizations among children were key factors in that decline.

Data used in the report is derived from a variety of sources, including the Centers for Disease Control and Prevention, the American Medical Association, the U.S. Census Bureau, and the U.S. Environmental Protection Agency.

The good and the bad

The report emphasizes a recent overall national health trend that is highly troubling. After declining by 20 percent between 1990 and 2015, the nation’s premature death rate — the number of years lost before age 75 — increased for the third straight year, and is now up 3 percent since 2015.

Some of that increase is driven by a 2 percent rise in cardiovascular deaths during that period — a rise that follows a 25-year pattern of continuously decreasing cardiovascular deaths. But an even bigger factor is the current opioid epidemic. Drug-related deaths jumped 7 percent in the past year alone. It’s now at 15 deaths per 100,000 people — a new high.

As the report notes, the United States ranks 27th in life expectancy among the 35 countries in the Organization for Economic Cooperation and Development (OECD).

“Results show the U.S. has a higher infant mortality rate, a higher prevalence of obesity and a lower life expectancy at birth compared with most OECD member countries,” the report says. “Even the top U.S. state in each of these measures ranks toward the bottom among OECD countries.”

Yet the U.S. spends significantly more on health care — both per person and relative to its wealth — than other nations. 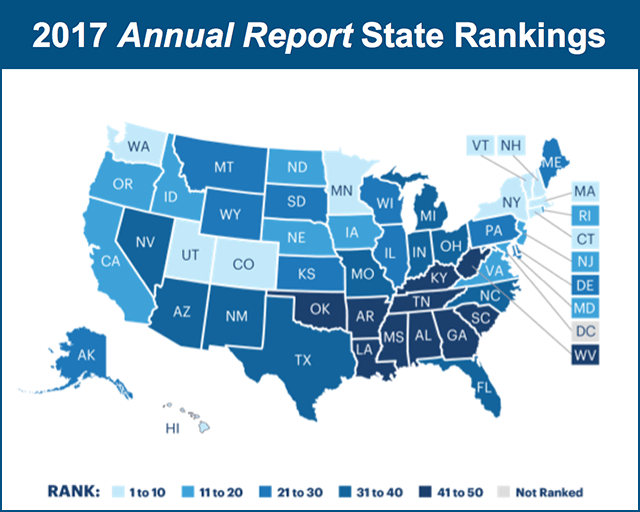 There’s some good national news in the report, however. The number of Americans who are smoking, the rate of preventable hospitalizations and the percentage of people without health insurance continued to fall in 2017.

The health insurance trend is likely to be reversed in upcoming years, however, if the Republican tax plan currently moving through Congress is passed. Health economists say the number of uninsured Americans will surge if the bill becomes law, due primarily to its repeal of the Affordable Care Act’s individual mandate.

Here are some additional Minnesota health trends that are highlighted in the 2017 America’s Health Rankings report:

FMI: You’ll find the full report — including a section dedicated to Minnesota — on the United Health Foundation’s website.