This year’s flu season may be reaching its peak, both nationally and here in Minnesota, say public health officials.

During the first week of 2018, the rate of flu-related hospitalizations in the United States climbed to 22.7 per 100,000 people — almost double what it was the week before, according to data released late last week by the Centers for Disease Control and Prevention (CDC).

The people most likely to be hospitalized for flu-related complications are those aged 65 and older, but individuals of all ages with chronic illnesses (such as diabetes and heart disease) and/or weakened immune systems are also at increased risk, as are pregnant women and young children.

Since Oct. 1, the flu has killed at least 85 adults and 20 children in the United States. Seven of those children died in the week ending Jan. 6.

This year the most predominant influenza strain is H3N2, which some have dubbed the “Aussie flu” because it was particularly deadly in Australia during that country’s flu season last summer (their winter).

Health officials say we should expect this year’s flu season to continue for at least another 11 to 13 weeks.

To find out more about the current influenza epidemic in Minnesota — including what individuals can do to keep the viral infection from spreading — MinnPost spoke late last week with MDH epidemiologist Karen Martin. An edited version of that conversation follows.

MinnPost: How does this flu season in Minnesota compare to past ones?

Karen Martin: It looks like it’s going to be a bit of a severe season, just because we’ve seen such a sharp increase in the last couple weeks of cases and hospitalizations. A recent severe season that we had was in 2014-2015. It had the same dominant [influenza] strain, AH3. It looks like this season might be fairly similar to that, but it’s a little hard to say until it’s said and done and you can take a look at the data and really see what the differences are.

MP: Do you have any idea when this year’s flu season might peak?

KM: I would say we’re probably in peak activity right now. But whether this is the peak week or whether it’s going to be next week or whether it was last week, it’s really hard to say. When it’s this busy, it can take a while for the data to come in and give us a clear picture. But we do know that activity is very high right now. If this week is not the absolute peak, we’re very close to it.

MP: The national map that was released suggests that flu activity in Minnesota, while widespread, is below that in many other states. Is that right?

MP: What is the most common type of flu this year?

KM: Influenza AH3. We have seen a little but of influenza B and a very small amount of influenza AH1. Typically, there will be one dominant A strain, be it H1 or H3. It appears that this year is going to be an H3 year. But that doesn’t mean that’s the only thing we’ll see. Often, if we have a large peak of influenza A around midwinter, we’ll see a smaller peak of influenza B in the spring. It’s just another reason why this flu is far from done. Even though we’re experiencing peak activity right now, it’s possible that things might go down, and then they might come back up again. It’s just really difficult to predict. 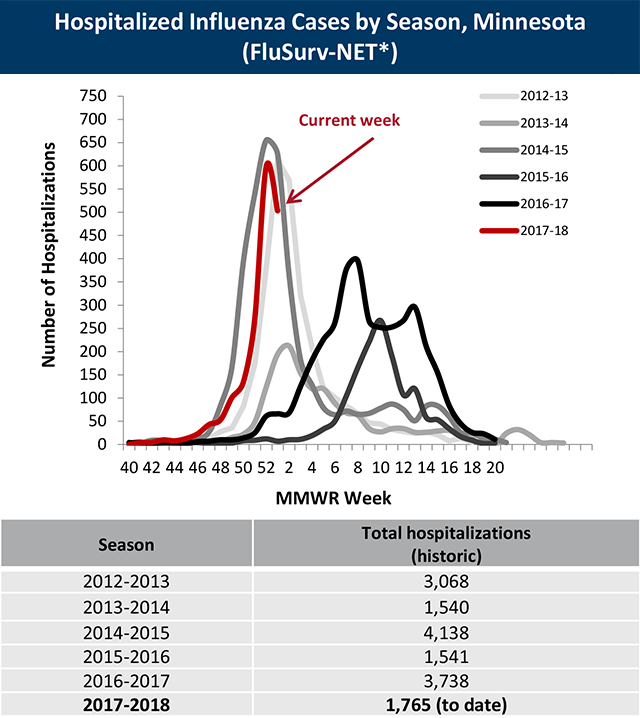 KM: Yes. A lot of news sources are calling it the Aussie flu, just because [Australia] had a particularly severe season, and now other places are seeing a severe season. It didn’t necessarily originate there, but that’s a nickname it’s been given.

MP: It’s not necessarily more deadly than other flus, correct?

KM: Not necessarily. This strain is fairly similar to what we saw last year, and certainly we’ve had very severe H3 seasons. I think people don’t realize that flu is deadly every year. People die from flu every year, including people without any underlying health conditions.

MP: The flu shot this year appears to be about 30 percent effective.

KM: Yes, that’s what they’re estimating. But we don’t actually have the flu estimate yet for this year. We’re going to get some preliminary estimates probably about mid-February. So right now, it’s just speculation.

MP: But you’re still recommending that people get the flu shot — and not just the elderly and other people at high risk, but everybody.

KM: Absolutely. It’s recommended for everyone over six months who is eligible to get the shot. So definitely people who are at high risk, meaning that if they do get sick, they’re going be more likely to have complications and maybe end up in the hospital. But even healthy people can get very sick with the flu. So, [get the flu shot] for yourself. Protect yourself. And do it for someone else who might be at higher risk, someone [for whom being exposed] to influenza could be worse than just having a week in bed. It might actually send them to the hospital — or worse.

MP: When should people who have the flu seek medical care?

KM: Just like with any illness, if you have symptoms that you’re concerned about, certainly call your physician. Flu will make you feel poorly, but if you’re having trouble breathing, if you are sensing any irregularities in your heart — those are signs that you need to contact your health care provider.

MP: People are pretty aware of what they should do to help protect themselves from getting the flu from others — like washing their hands a lot. But what should people to do protect others from catching the flu from them?

KM: If you’re sick, it is important to cover your cough. When you sneeze or cough, use a tissue. If you don’t have that, use your elbow. That kind of prevents the virus on the droplets that you expel when you cough or sneeze from going into the air and possibly infecting someone else.

MP: And they should stay home.

MP: That can be a hard thing to do.

KM: It’s a very difficult thing to do for many people, myself included. It’s inconvenient, and there might be expectations either from yourself or from your workplace. But it really is to everyone’s benefit for people to not come to work — and not come to school — when they’re sick with influenza or other respiratory illnesses. Influenza is serious. It hits every year and many, many people get sick. So anything that we can do to prevent that or to lessen its spread is going to be beneficial.

FMI: You can find out more about flu prevention — and follow weekly flu activity in Minnesota — on the MDH’s website.