The idea that our landscapes can be therapeutic for our physical as well as our psychological health has gained considerable traction in recent years. It’s even launched a new field of scientific enquiry known as health geography.

Most of the research on this topic has focused on green spaces, from national forests to urban parks, although blue spaces — oceans, lakes, rivers, streams and even fountains — have also begun to receive their own bit of attention.

But what about white spaces — those environments that are covered with snow and ice for a substantial part of the year? How do those landscapes shape the health and well-being of the people who must navigate through them?

University of Minnesota doctoral researcher Jessica Finlay has explored that question in a small but intriguing study published recently in the journal Social Science & Medicine. Finlay surveyed 125 older Minnesotans (aged 55 to 92) from three geographic locations in the Twin Cities (Eden Prairie, North Minneapolis and downtown Minneapolis) about the impact that white spaces have on their physical and psychological health. She also conducted in-depth interviews with six of the survey’s respondents.

Finlay found, perhaps not unexpectedly, that snowy, white landscapes “are contradictory spaces that can simultaneously heal and harm.” On the “harm” side, respondents spoke frequently about feeling more vulnerable and unsafe in winter, a factor that greatly restricted many peoples’ mobility and activity. Those limitations, in turn, negatively affected both their psychological and physical health.

“The snow mounds get as high as me, and then I’m literally climbing a mount,” said one downtown Minneapolis resident. “I don’t know how many times I’ve fallen and [the transport staff] had to pick me up.”

On the “heal” side, however, respondents spoke about the beauty of wintry landscapes and about how proud they were of their ability to endure — and even thrive — during Minnesota’s long winters. They also mentioned how winter brought out the best in themselves and in their neighbors.

“We’ve got a neighbor on the corner who bought himself a little — he calls it his little tractor toy,” said one north Minneapolis resident. “I love that man. He goes around every time it snows, and he clears the whole sidewalk around the block for everybody. That is so convenient and so nice. He doesn’t ask for anything. He said, ‘No, I just like doing it.’ The neighbors will go over and bring him a six pack of beer or something.”

MinnPost recently talked with Finlay about why she conducted the study and what its findings say about the therapeutic and non-therapeutic impacts that Minnesota’s white spaces have on its residents. An edited version of that conversation follows.

MinnPost:  What are therapeutic landscapes?

Jessica Finlay: It’s the idea that places can promote wellness and healing by being immersed in those landscapes. It began with extraordinary sites of mental, spiritual and physical healing — places like pilgrimage sites, wonderful parks and wildernesses, hot springs, baths and spas. It has evolved over the last 20 years to incorporate everyday sites of health and wellbeing, such as a backyard garden, a yoga studio or that little pocket park just down the street.

MP: You seem to be the first researcher to look at the therapeutic aspects of white spaces.

JF: That’s correct. No one has yet to coin the term “white space.” And given where we live — in the Minnesota climate — it couldn’t help but catch my attention that that was a gap in the literature.

MP:  As you note in your paper, much of the past research on snowy and icy environments has been about negative health affects — about how they’re barriers to everyday activities and can lead to greater loneliness, for example. But you looked at both the negative and positive aspects. 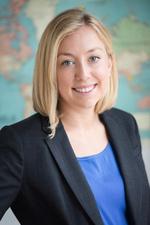 JF: Yes, although I didn’t actually set out to study winter. It wasn’t the [original] focus of the study. I was looking at aging in place, the experiences of people aging in their homes and neighborhoods. I actually conducted most of my interviews during the spring, summer and fall. But winter turned out to be a passionate conversation topic. When they talked about where they lived, it couldn’t help but come out. I heard about many of the common dangers — concerns about falls and mobility, and worries about being cooped up in their homes, fearful of going outside. But I was also surprised by the many positive comments that I heard. People were really proud of their ability to survive and thrive during winter. It really was a part of who they were and where they lived.

MP:  The people you interviewed came from a wide range of economic backgrounds. Some lived in homeless shelters, while others lived in high-end homes and condominiums. But that aspect of people’s backgrounds didn’t seem to predict whether they viewed white spaces therapeutically or not. What factors do predict positive attitudes about white spaces?

JF: I didn’t have enough people to really divide by factors. But anecdotally I’ll just refer to a few. I think the amount of time that people had lived in Minnesota impacted their experiences. Many had grown up in the state, or at least somewhere with snow and ice on the ground. They’re well familiar with winter’s challenges and have honed and accumulated skills over a lifetime for dealing with it. But they also enjoy winter. Some said the first snow reminded them of feeling like a kid at Christmas time. So, I think time spent in the environment was one factor. I would also say gender sometimes impacted people’s experiences, but often to the contradiction of what we might expect. In one couple, for example, the man was quite worried about [driving] in winter, whereas his wife was happier with it. So sometimes it defies what you might expect.

MP: That couple was interesting because although the wife had no problems with driving in winter, she was fearful of walking.

JF: Yes, and that was from their past experiences. For the woman, her mother had experienced a fall, which she thought had triggered her mother’s dementia. That experience was really informing the woman’s perspective and her opinions [about walking outside during the winter]. Health status and disability were also immense factors. When snow piles up, [navigating sidewalks and street corners] is hard enough for those of us who are young and able-bodied. If you’re trying to navigate with a walker or a cane, or simply just have a bit of unsteady balance, it can be immensely difficult.

MP: It was interesting to read that many people use local grocery stores and other shops to interact with other people and combat winter loneliness.

JF: Yes. People talked about the joys of having these routines where they would go to soak ambient contact with others. They enjoyed their regular trips [to places] where they were known. They’d chat with the woman at the [checkout] counter about, you know, their lives and experiences. So they’re really using services to kind of gain this contact with others through a daily basis.

MP:  You interviewed only older adults. Do you think your findings about attitudes toward white spaces would be different with a younger age group?

JF: I think there would be commonalities and differences. If you’re younger and more agile, I think you might be less concerned about the weather. But that being said, I was out for a run yesterday and was cursing the icy patches and feeling really unsafe. So we still have our moments. Also, people in retirement frequently talked about having more choice in how they could engage with white space. Many felt pleased to no longer have to go out in bad weather to get to work. That choice about engaging with winter was something they really appreciated in later life.

MP:  One woman said she looked forward to a snowy day because it meant she could bake more and look at the snow while she was baking. So there seems to be a psychological element to how people view white landscapes. When it comes to harsh winters, some people just seem really good at turning a lemon into lemonade, to cite a cliché.

JF: Yes. There was a lot of resiliency expressed. That woman didn’t like to be outside in the snow. She just enjoyed looking at it comfortably from her warm home.

MP:  So do you think that white spaces can be as healing as green spaces?

JF: I think they can be. The peaceful falling of bright, fresh snow — that can be an immersive, multi-sensory experience that promotes health and well-being. But it also brings challenges and harms. But so does every kind of space. A green space can also bring its own difficulties and challenges and fears and vulnerabilities. One of the purposes of my paper is to point out that ambivalence. There’s both positive and negative wrapped up in every space. Not one environment will be uniformly healthy or unhealthy. It’s always complicated.

MP: What can individuals, particularly older ones like those in your study, do to have more positive interactions with white spaces?

JF: I think fall-prevention classes would be great. Learn how to protect yourself so you are safe outside. To quote one of the women in our study, “I walk like a penguin.” There are also some easy and often inexpensive ways to band together to get out of the home during the winter. You can join a walking club in the skyways downtown, for example, or in a mall in the suburbs. Try being proactive about getting out more. Perhaps set a goal that you’ll talk to at least one person a day, or that you’ll get out of your home, say, once or twice a week. Also, try to take advantage of the winter season. There are winter-oriented recreation groups that, if you’re able, you could join. Take advantage of those, whether it’s snowshoeing, skating, cross-country skiing, or just going someplace where [winter] events are organized. Some people in our study mentioned they enjoy taking photography in the winter.

MP: And what can communities do to help make white spaces more positive, more therapeutic?

JF: There are steps that we can take to minimize the harms of winter and maximize the joys — having, for example, neighborhood shoveling programs where you kind of band together to help those in need. That can also boost socialization. Also, try to check in with those that might be isolated in the winter, whether it’s a phone call or stopping in for tea or coffee. Be aware that some people are cooped up in their homes and can have quite difficult seasonal depression difficulties.

JF: I think it important to be aware that snow can both help and harm. It seems obvious to those of us who live in Minnesota that we should pay attention to blizzards and cold weather and ice storms and whatnot. But the everyday winter conditions are just as important and are often overlooked. So, we need to really think about how older adults are potentially more vulnerable to climate conditions, how they’re impacted for both the better and the worse by white spaces.

FMI: You’ll find an abstract of Finlay’s study on the website for Social Science & Medicine, but the full study is behind a paywall.