The strength — or weakness — of a state’s laws regarding the sale and ownership of guns has a significant influence on the rates of gun-related murder and suicide in that state’s counties, according to a study published Monday in the journal JAMA Internal Medicine.

Strong firearm laws also have a surprising impact on gun-related deaths in counties in neighboring states, the study reports.

This is obviously a timely study, coming in the aftermath of last month’s deadly Parkland, Florida school shooting, which has led to renewed calls for stronger gun legislation across the country.

More than 36,000 people die in the United States each year from gun-related injuries. About 36 percent those deaths are the result of a homicide, while about 60 percent are from suicide. The remainder are the result of unintentional shootings.

Gun-related deaths are “a public health emergency, and yet we know so little about how to prevent these injuries and death,” the study’s lead author, Dr. Elinore Kaufman of New York Presbyterian-Weill Cornell Medical Center in New York City, told CBS News.

She undertook the new study, she said, to help both the public and policymakers better understand the impact of state laws on gun violence.

“Specifically, in the U.S. most firearm policy is made at the state level, but states do not exist in a vacuum, and firearms can cross state lines, just like any other consumer good,” Kaufman said. “No one had really investigated what this means for states with different degrees of firearm restriction in place.”

For the study, Kaufman and her colleagues used data on firearm deaths collected by the Centers for Disease Control and Prevention (CDC) from 3,108 counties in 48 states between 2010 and 2014. (Alaska and Hawaii were not included in the study because they have no bordering states.) They also assigned each county a “state policy score” (from 0 to 12) based on the strength of its state’s firearm laws and an “interstate policy score” based on how strict the laws were in neighboring states.

An analysis of that data revealed that the rate of gun-related homicides was lower in counties whose states have strict firearm laws.

The rates were also lower in counties whose states have weak laws if — and only if — surrounding states had strong laws.

As for gun-related suicides, they, too, were less likely in counties in states with strict firearm laws than in those in states with relaxed laws — no matter what the laws were in neighboring states.

“This finding is consistent with prior studies showing that most firearm suicides are committed by firearm owners or their family members, and likely involve legally purchased firearms obtained for other purposes,” write Kaufman and her colleagues in their paper. 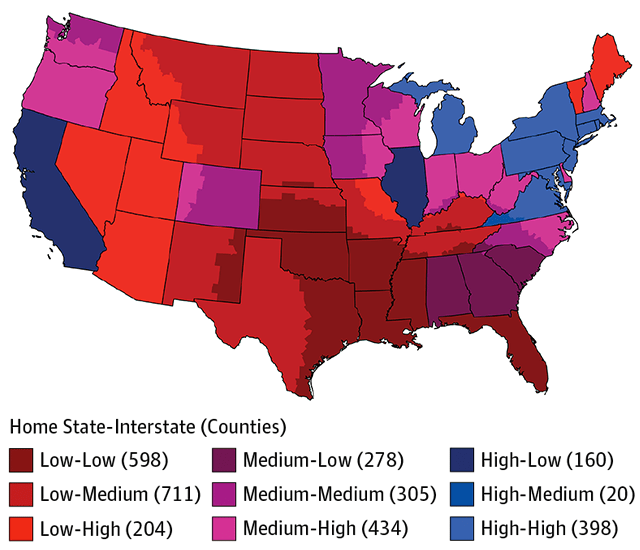 The study also found, however, that all types of suicides, whether carried out with a gun or by some other method, were lower in states with strict firearm laws.

“Because suicidal ideation is often transient, and because firearms are a highly lethal method of suicide, access to firearms is an important risk factor for completed suicide attempts,” the researchers write.

“Our findings provide evidence that stronger state firearm laws could help to prevent firearm suicides, without an equivalent increase in suicide by other methods,” they add.

This study is observational, so it can’t prove a cause-and-effect relationship between lax firearm laws and higher rates of gun-related deaths. Also, very few states (mostly California, Michigan, Illinois and a few others along the East Coast) have strict laws, so the “ability to detect an effect of the strictest laws may have been limited,” the study’s authors point out.

Still, the findings support other research that has provided “indirect evidence for interstate spillover effects of state firearm laws and firearm death rates,” write Kaufmann and her colleagues.

“Firearm death rates vary widely between states, as do the strength of their firearm laws,” explains Dr. Robert Steinbrook, a professor of internal medicine at Yale University, in an editorial that accompanies the study.

“If the upward trend in deaths from firearm injury in the United States is to be reversed — there were 7.9% more deaths in 2015 than in 2014 — then the death rates in each state must decrease,” Steinbrook stresses.

“Because Congress has been unwilling or unable to act, the need for effective state firearm laws and policies in the United States has never been greater,” he adds.

FMI: You’ll find abstracts of the study and the editorial on the JAMA Internal Medicine website, but, unfortunately, the full papers are behind a paywall.