Alcohol use among Minnesota’s teens continues to decline, according to new data released on Thursday by the Minnesota Department of Health (MDH).

“This is really good news, given the health effects that drinking has on youth,” said Dana Farley, MDH’s alcohol and drug policy prevention coordinator, in an interview with MinnPost.

Those effects include being at increased risk of death from alcohol poisoning, alcohol-related crashes and other unintentional injuries, according to background information in the MDH’s report on the new data. They also include being at higher risk for suicide, homicide and physical and sexual assault.

“Alcohol consumption at young ages can also create changes in brain development that could lead to dependency, memory problems and other long-term effects that may cause difficulty in school and beyond,” the report adds.

A comparison of two surveys

The data in the report comes from the Minnesota Student Survey, which has been administered to students in three, and more recently in four, different grade levels (5th, 8th, 9th and 11th) every three years since 1989.

When MDH researchers compared the latest two surveys — 2016 and 2013 — they found that the percentage of 9th and 11th grade students who reported being current users of alcohol (who said they had consumed one or more drinks in the past 30 days) had dropped from 21 percent to 17 percent.

They also found that the percentage of students who reported binge drinking (who said they consumed five or more alcoholic drinks on one occasion) had decreased from 11 percent to 8 percent.

The reasons behind these declines are “complex,” said Kari Gloppen, a research scientist with the MDH.

“We know that youth are engaging in fewer risk behaviors overall, including other drugs, tobacco use and risky sexual behavior,” she explained. “And we also know there has been a lot of effort put into school and community activities about talking to kids about alcohol use.”

Programs that promote supportive communication between young people and adults have also been helpful, Gloppen added.

“Youth who feel a connection with a positive adult in their life, whether it’s somebody at school or in their home or in their community, are much less likely to drink,” she said.

Some troubling patterns in youth drinking are continuing, however. For example, the prevalence of binge drinking among teens may be down overall, but it increases significantly during high school. In 2016, the proportion of 9th graders reporting binge drinking was 5 percent. Among 11th graders, that figure was more than twice as high: 13 percent.

Furthermore, Minnesota students who engaged in binge drinking were found to be less likely than their non-binge-drinking peers to perceive the behavior as a risk to their health or safety. 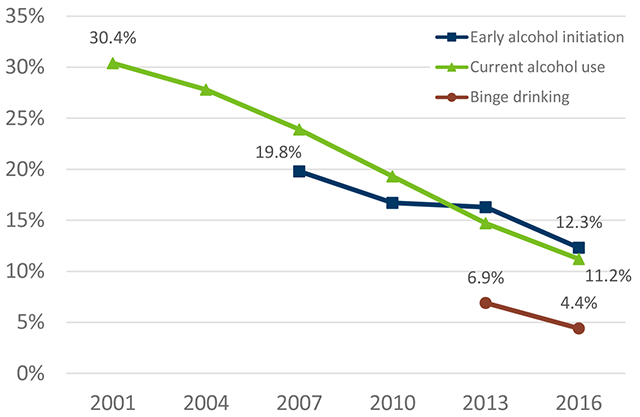 Minnesota Student Survey, 2001 to 2016. Note: Data are shown for all years variable was available.
Percent of 9th grade students who reported alcohol use indicators, 2001 to 2016

The data also found several troubling disparities in the rates of risky drinking among Minnesota’s young people. American Indian youth were more likely to report current alcohol use than teens in other racial or ethnic groups, for example. And bisexual, gay or lesbian youth were more likely to report early alcohol use than their heterosexual peers.

Binge drinking was significantly higher among students who had experienced one or more adverse childhood experiences, which include physical and emotional abuse, neglect, violence and mental illness in the household.

“Often alcohol use is part of dealing with those experiences of trauma,” said Farley.

One the most frequent adverse experiences cited by teens in the Minnesota survey was the incarceration of their parents, he added.

The MDH analysis also identified several protective factors that are associated with a significantly lower risk of problem drinking among Minnesota’s youth. These include being able to talk with a parent about their problems, having a positive relationship with their teachers, and feeling safe at school.

“Having someone who can be there for them — that’s an important protective factor,” said Farley.

Schools and communities can help, he added, by giving students of all ages more opportunities to become engaged in academic, sports and other activities in their neighborhoods.

“There are other things we can do at the community level as well,” said Gloppen, “such as having more compliance checks on retailers to make sure they are checking IDs and not selling alcohol to underaged people.”

Communities also need to consider whether liquor stores or bars are too near schools, parks or other places where young people are likely to hang out, and what that means in terms of their exposure to alcohol advertising, she added.

“We know that the more advertising for alcohol that kids see, the more likely they are to drink,” Gloppen said.

Young people are, of course, also strongly influenced by the drinking habits of the adults around them.

“Adult binge drinking in Minnesota in 2016 was the third highest in the nation,” said Farley. “Although we had positive news for youth, we still have some work to do here in Minnesota.”

FMI:You can read the MDH analysis of the latest data on alcohol use among youth in Minnesota on the agency’s website.

Alcohol use among Minnesota’s teens continues to decline