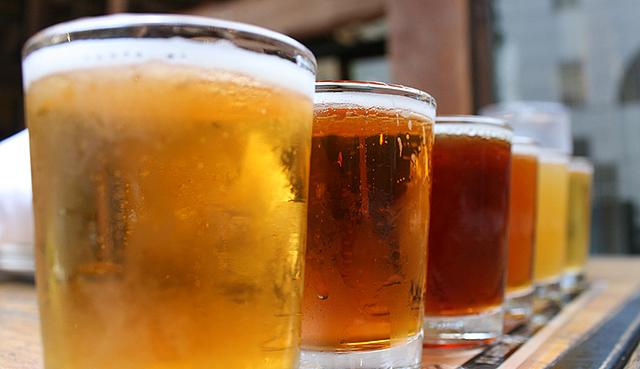 Creative Commons/Quinn Dombrowski
A large, international study has found that consuming more than the equivalent of five drinks per week is associated with an increased risk of cardiovascular disease and a shortened life span.

The “safe” upper limit for healthy alcohol consumption for men is almost twice as high in the United States as it is in the United Kingdom, according to official health guidelines from both countries.

But Americans — particularly American men — may want to start following the British recommendations. A large, international study has found that consuming more than the equivalent of five drinks per week — almost two-thirds fewer than the amount deemed safe for men in the U.S. — is associated with an increased risk of cardiovascular disease and a shortened life span.

These findings, which were published in The Lancet late last week, add to other research in recent years that has suggested even “moderate” drinking may be harmful to people’s health.

In Britain, health officials recommend no more than 112 grams of alcohol per week for both men and women. In terms of that country’s “standard drink” alcohol content, that’s about six pints of beer or six medium-sized glasses of wine.

The current study, which was conducted by a team of 120 researchers, was a meta-analysis of 83 different studies involving almost 600,000 people in 19 countries. The oldest study started in 1964; the latest, in 2010. All of the participants drank alcohol and none had a history of cardiovascular disease at the time they were enrolled in the various studies.

Data from the studies included detailed information about the participants’ health, as well as questions about their alcohol consumption and other health-related behaviors. About half the participants reported drinking more than 100 grams of alcohol per week, and 8 percent drank more than 350 grams per week.

When all the data was analyzed, the current study’s authors found that drinking more than 100 grams of alcohol per week (about five British standard drinks) was associated with a shorter life expectancy.

Interestingly, the analysis found that the study’s participants had a slightly lower risk (6 percent) of non-fatal heart attacks for each additional 100 grams of alcohol they consumed.

The study’s authors stress that the increased risks from the other cardiovascular diseases outweigh this modest benefit.

The study comes with caveats, of course. It was an observational study, and therefore can’t prove that alcohol consumptions was directly related to a shortened life expectancy and an increased risk of certain cardiovascular diseases. Although the study’s authors adjusted their findings for factors known to increase the risk of early death and heart disease (such as age, gender, smoking and physical exercise), there may be other factors “hidden” in the data that could explain the study’s results.

Also, the participants self-reported how much alcohol they drank. People are known to be inaccurate when making such reports, although usually by underestimating how much they drink. In addition, the participants were asked only once about their alcohol consumption. Their drinking habits may have changed during the studies’ follow-up periods.

Still, the study is a sober reminder that we do not yet fully understand the impact of alcohol’s consumption on our health — or what is a “safe” level of drinking.

Angela Wood, the study’s lead authors and a biostatistician at the University of Cambridge, offers a cautious message to the public. “If you already drink alcohol, drinking less may help you live longer and lower your risk of several cardiovascular conditions,” she said in a released statement.

“We should always remember that alcohol guidelines should act as a limit, not a target, and try to drink below this threshold,” she added.

For people in the U.S.  — particularly men — that means drinking well below the recommended threshold.

FMI:The study can be read in full on The Lancet’s website.