The rate at which older Americans are dying from fall-related injuries has risen dramatically — by 31 percent — in the United States over the past decade, according to a new report from the Centers for Disease Control and Prevention (CDC).

The CDC researchers warn that if deaths from falls continue to rise at the current rate, more than 59,000 older adults will die from such injuries in 2030.

As background information in the report points out, deaths from unintentional injuries are currently the seventh-leading cause of death among adults aged 65 and older, and falls make up the largest percentage of those deaths.

In surveys, one in four older adults say they have fallen in the previous year.  Most falls cause only superficial scrapes and bruises, but about one in 10 results in a potentially serious injury — usually a fracture or head injury — that requires emergency medical treatment.

The new CDC report, which is based on state-issued death certificates, found that the fall-related death rate for Americans aged 65 and older has steadily increased over the past decade in 30 states and the District of Columbia.

One of those states was Minnesota, which in 2016 had the third-highest death rate from falls among people aged 65 and older, behind Wisconsin and Vermont.

“The higher rate in Wisconsin, compared with that in Alabama, might be partially attributable to a higher proportion of white older adults in Wisconsin than in Alabama,” the CDC researchers write. 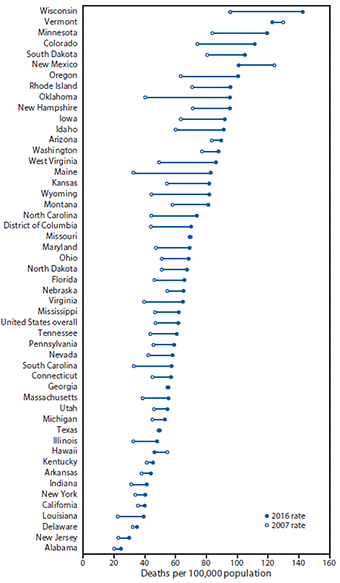 Source: CDC
Age-adjusted rate of deaths from falls among persons aged ≥65
years, by state and overall — United States, 2007 and 2016

The CDC researchers did not investigate the reasons fatal falls have increased among older Americans, but they point to several possible factors: reduced physical activity; people living longer with chronic diseases (which can make them more vulnerable to falls); increased use of prescription medications (which can slow down thinking and reaction time); and age-related changes in gait and balance.

The researchers recommend that physicians assess how much their older patients are at risk of falling, and then help patients address any risk factors that are modifiable — by changing the patient’s medications, for example, or encouraging the patient to engage in specific physical activities to improve gait, strength and balance.

Earlier this year, the United States Preventive Services Task Force reported that regular exercise was the most effective action older people could take to reduce their risk of falls.

FMI: The CDC report was published in the May 11 edition of Morbidity and Mortality Weekly Report, where it can be read in full. For information on simple actions older people (or their family caregivers) can take to lower the risk of falling, take a look at the materials available through the CDC’s STEADI (Stopping Elderly Accidents, Deaths, and Injuries) program.