With Minnesota in the midst of a heat wave, it’s a good time for parents, grandparents and anyone else driving around in a car with children to remember how dangerous it is to leave a child in a vehicle on a hot day — even when the car is parked in the shade.

Tragically, 37 children die each year, on average, in the United States from being trapped in a closed, hot car. This year has already seen at least seven children die, and summer — when the risk obviously climbs — has only just begun.

Three-quarters of children who die in a hot car are under the age of 2.

In more than half of these types of deaths, the parent or caregiver didn’t intend to leave the child in the car, but they became distracted and forgot the child was with them, usually because the child had fallen asleep in the back seat. Another significant portion of the deaths happened after unattended children climbed into a car and couldn’t get out.

Less than 20 percent of the cases involved a child being left intentionally in a car — while a parent did a shopping errand, for example.

Children die in heated cars due to complications of a form of hyperthermia known as heatstroke.  The child’s internal body temperature rises above 104 degrees Fahrenheit for an extended period of time. Unable to cool itself, the child’s body starts to shut down, quickly damaging the heart, lungs, brain, kidneys and other vital organs.

The danger comes on quickly

The authors of a recent study, published in the journal Temperature, set out to determine just how long it takes for cars to reach temperatures fatal to children. 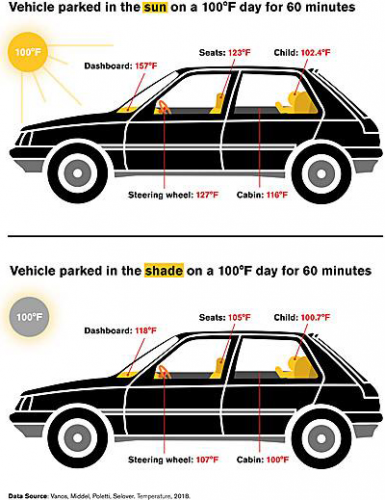 They placed six cars — two sedans, two economy cars and two mini-vans — outside on a summer day in Tempe, Arizona, when the temperatures were in the 100s. They then measured the interior temperatures of each car. After about one hour, the average air temperature inside the cars was 116 degrees Fahrenheit. The cars’ interior surfaces were also scorching hot: The temperature of the dashboards averaged 157 degrees and that of the seats, 123 degrees.

The researchers then repeated the experiment with the cars in the shade.  After one hour, the average interior temperature was 100 degrees Fahrenheit. The dashboards average 118 degrees and the seats, 105 degrees.

In both cases, the economy cars warmed the fastest and the minivans the slowest due to differences in the air volume within the vehicles.

But none of the vehicles was safe for a child to be left inside it.

“We found that a child trapped in a car under the study’s conditions could reach a body temperature of 104 degrees F in about an hour if a car is parked in the sun, and just under two hours if the car is parked in the shade,” said Jennifer Vanos, the study’s lead author and an assistant professor of family medicine and public health at the University of California San Diego, in a released statement. “This body temperature could be fatal to infants and children — and those who survive may sustain permanent neurological damage.”

What parents can do

As Vanos and her colleagues point out in their paper, several technological solutions have been proposed to prevent these tragedies, such as having a sensor that alerts the driver if a child is still in the car when the driver gets out. But such solutions “have wavered due to industry disinterest, fear of sensor failure and liability, lack of market support, and cost,” the researchers explain.

So, it’s up to parents and other adults to be aware of the danger — and to take active steps to prevent it from happening to them. And don’t think your child is not at risk. As the nonprofit group KidsandCars.org notes, “Even the best of parents or caregivers can unknowingly leave a sleeping baby in a car; and the end result can be injury or even death.”

Here are that organization’s safety tips above preventing heatstroke tragedies:

* Put something you’ll need like your cellphone, handbag, employee ID or brief case, etc., in the back seat so that you have to open the back door to retrieve that item every time you park.

FMI: You’ll find an abstract of the study on Temperature’s website, but the full study is behind a paywall.