The Centers for Disease Control and Prevention (CDC) released its bi-annual National Youth Risk Behavior Survey report last week. As with earlier reports based on this survey, the data revealed both some encouraging and some troubling trends.

On the positive side, a smaller percentage of U.S. teens are having sex or using illicit drugs than in the past.

On the negative side, a greater proportion of teens say they have felt sad or hopeless or have had suicidal thoughts.

But even the positive trends in this report come with some worrisome caveats. Fewer teens may be having sex, but those who are sexually active are less likely to use condoms than in the past.

And although the use of illicit drugs like heroin, cocaine and hallucinogens is down, about one in seven of the students surveyed reported that they had misused prescription opioid pain medications.

“Overall, I think youth are making better decisions, particularly about their sexual behavior and their drug use,” said Kathleen Ethier, director of the CDC’s Division of Adolescent and School Health in the National Center for HIV/AIDS, Viral Hepatitis, STD, and TB Prevention, in an interview with CNN.

“At the same time, the rate of violence and victimization they’re experiencing hasn’t gone down,” she added. “Bullying hasn’t decreased. The proportion of youth who have ever been physically forced to have sex has not decreased. We’re seeing increases in experiences of persistent feelings of sadness and hopelessness and suicide ideation and behaviors, and so that remains a great concern.”

A closer look at the findings

The CDC report draws on data collected from high school students who took the National Youth Risk Behavior Survey during the years 2007 through 2017. More than 14,750 students in 26 states and 13 large urban school districts completed the 2017 survey. Minnesota was not among those states, as it conducts its own Minnesota Student Survey.

Here are some of the specifics of the CDC report’s key findings:

Sexual behaviors. The percentage of high schools students who reported being currently sexually active (who had sexual intercourse within three months of taking the survey) dropped from 47.8 percent in 2007 to 39.5 percent in 2017.

Among the sexually active students, 53.8 percent said they had used condoms the last time they had sexual intercourse, compared to 61.5 percent in 2007. 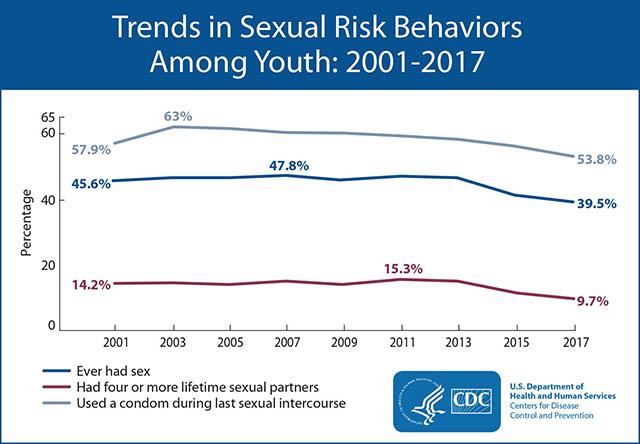 Ethier told NPR that the drop in condom use is due, at least in part, to “a decrease over time in requirements that school cover HIV and [sexually transmitted diseases] in health education programs.”

Young people aged 15 to 24 account for half of the 20 million STD cases diagnosed each year in the U.S., according to the CDC report.

Illicit drug use. In the 2017 survey, 14 percent of the students said they had ever used an illicit drug (defined as cocaine, heroin, methamphetamines, inhalants, hallucinogens or ecstasy), down from 22.6 percent in 2007. The percentage of students who reported injecting drugs was also down, from 2 percent in 2007 to 1.5 percent in 2017.

But 14 percent of the students in the 2017 survey said they had misused a prescription opioid at least once. This was the first time the survey specifically asked about prescription opioids, so the CDC report is unable to indicate whether misuse of those drugs is increasing or decreasing among teens. In 2015, however, 16.8 percent of the students reported having taken any kind of prescription medication — including opioids but also stimulant drugs like Ritalin and Adderall — without a doctor’s approval.

Bullying.The percentage of teens who say they’ve been bullied has declined only slightly. In 2017, about one in five teens — 19 percent — said they had been bullied at school, a percentage that’s essentially unchanged from 2009 (19.9 percent).

Sexual violence. One of the more troubling findings in the CDC report is the percentage of teens who say they’ve been forced to have sex. In 2017, 7.4 percent of the students reported such an incident on the survey, including 11.3 percent of girls. Those percentages have not significantly improved over the last decade. In fact, they haven’t improved at all for girls. In 2007, 7.8 percent of all teens — and 11.3 percent of the girls — reported that they had been forced to have sex.

Dating violence. The percentage of students who reported having been physically hurt on purpose (hit, slammed into something, or injured with an object or weapon) by someone they have dated fell from 9.6 percent in 2015 to 8 percent in 2017. Still, almost one out of 10 girls — 9.1 percent — reported in 2017 that they had been physically abused by someone they had dated.

Depression and thoughts of suicide.  The proportion of teens who say they’ve had persistent feelings of sadness or hopelessness increased from 28.5 percent in 2007 to 31.5 percent in 2017. More teens are also reporting that they have seriously considered suicide — 17 percent in 2017 compared to 14.5 percent in 2007.  The percentage was twice as high for girls (22.1 percent) than for boys (11.9 percent).

Those numbers are deeply disturbing. They mean that almost one in four teenage girls and more than one in 10 teenage boys seriously considered suicide in 2017.

FMI: You can read the 2017 National Youth Risk Behavior Survey report on the agency’s website. If you or someone you know might be at risk of suicide, call the National Suicide Prevention Lifeline at 1-800-273-TALK (8255).