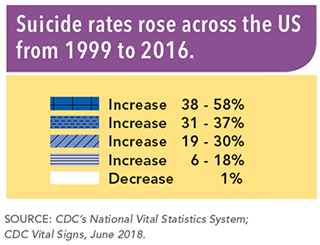 The rate of suicide deaths in the United States increased by 25 percent over the past two decades, and 30 states have seen their suicide rates climb by nearly 30 percent, according to a report released Thursday by the Centers for Disease Control and Prevention (CDC).

In 2016 alone, almost 45,000 Americans aged 10 or older lost their lives to suicide. It is now the 10th-leading cause of death in the U.S., and is one of only three leading causes of death that are on the rise. (The other two are Alzheimer’s disease and drug overdoses.)

Guns are the most common method used for suicides in the U.S., accounting for about half of such deaths in 2016, followed by hanging and then poisoning (including through the use of opioids).

“These findings are disturbing. Suicide is a public health problem that can be prevented,” said Dr. Anne Schuchat, the CDC’s principal deputy director, in a press briefing held earlier this week.

Minnesota was one of the states with the biggest suicide-rate increases. Its rate jumped a staggering 40.6 percent between 1999 and 2016, the years covered in the CDC report. Only six states — Idaho, Kansas, North Dakota, South Dakota, Vermont, and Utah — had larger increases.

The state with the lowest rise in its suicide rate was Delaware (5.9 percent). Only one state, Nevada, had a decrease in its rate (1 percent).

In addition to being geographically widespread, U.S. suicide rates rose in both men and women and across all racial and ethnic groups, the study found.

The rates also climbed among all age groups, except for people over the age of 74. Particularly hard-hit were middle-aged adults (those aged 45 to 64). They had the highest number of suicides and particularly high increases in rates, Schuchat said.

Many suicides within this age group may be “deaths of despair” — caused by the lingering economic effects of the Great Recession of 2007 to 2009, Schuchat acknowledged. She also pointed out that middle-aged Americans have higher rates of drug overdoses than other age groups.

Suicides are rarely caused by a single factor, however.

The report also found that about half of the Americans who died by suicide had not been diagnosed with a mental health condition at the time of their death.

Everyone needs to be involved

Those warning signs are the following:

If you are concerned about a friend or loved one:

FMI: The CDC findings were published in the agency’s Morbidity and Mortality Weekly Report.