The ozone pollution in U.S. national parks is “statistically indistinguishable” from that in many of the country’s largest metropolitan areas, according to a study published Wednesday in the journal Science Advances.

The study also found that fewer people visit national parks when ozone levels climb — a sign that health concerns may be keeping people away.

“We found that while cities once had more ‘bad air days’ with unhealthy ozone levels than national parks, today parks and metro areas have virtually the same number of unhealthy ozone days per year on average,” write the study’s authors, Iowa State University economists David Keiser and Gabriel Lade and Cornell University economist Ivan Rudik, in an article for The Conversation.

These findings have important health implications. Even modestly elevated levels of ozone can be a health risk. Ozone can make it more difficult to breathe, particularly for children, the elderly and people with chronic lung diseases, such as asthma, emphysema and bronchitis. It also raises the risk of respiratory infections.

Inhaling elevated amounts of ozone — even for a short period of time — can affect the heart as well as the lungs. One study, for example, linked just one to two days of exposure to high levels of ozone with an increased risk of heart attack among middle-aged adults.

The harmful effects of elevated ozone levels have also been found to be greater during exercise.

For the current study, the three researchers analyzed ozone-level data collected during the years 1990-2014 by the National Park Service and the Environmental Protection Agency (EPA) in 33 of the largest national parks in the U.S., including several in the Midwest, such as the Badlands in South Dakota, Isle Royale in Michigan and Voyageurs in northern Minnesota.

They also analyzed similar data for the 20 largest U.S. metropolitan areas. (The Minneapolis-St. Paul area was not included.)

Keiser, Lade and Rudik say were surprised by what the data revealed. 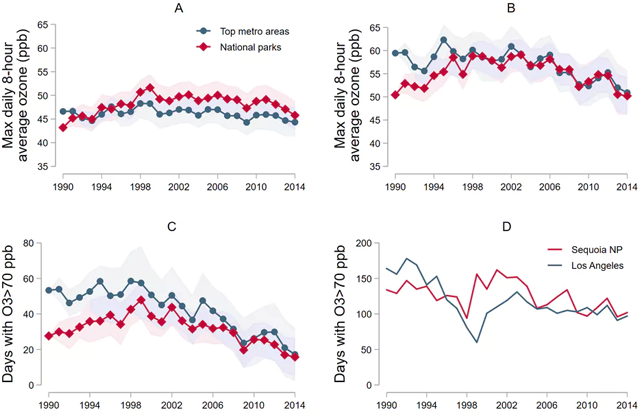 Since the early 2000s, ozone levels in both national parks and metropolitan areas have improved — aided, as the researchers point out, by several federal efforts, particularly the EPA’s 1999 Regional Haze Rule, which required states to take steps to improve visibility and air quality in parks and wilderness areas.

“But bad air days still occur,” the researchers add. “On average, among the locations we studied, metro areas currently have 18 unhealthy ozone days per year, while parks have 16.”

Keiser, Lade and Runik also took a look at the National Park Service’s monthly visitor data to see if people were using the parks less during periods of ozone pollution.

They found that a 1 percent increase in ozone concentrations was associated, on average, with about a 1 percent decrease in park visits, even though the air quality tended to be at its worse during the parks’ popular summer and autumn months.

Why are fewer people going to national parks during those “bad air days”?

“We see two possibilities,” write Keiser, Lade and Redik.  “First, visitors may worry about adverse impact on their health. [Parks issue air quality warnings.] Second, visibility is typically poor when ozone levels are high because ozone participates in chemical reactions in the air that can form haze.”

Although air pollution may be keeping some people away from national parks, it hasn’t deterred millions of others. More than 300 million people visit U.S. national parks each year — and about a third of them go on days when ozone levels are considered unhealthy.

“This suggests that improving air quality in U.S. national parks could produce significant human health benefits,” write Keiser, Lade and Redik. “We hope that state and federal policy makers will weigh these benefits of improved air quality along with their costs as discussions move forward on air pollution regulations.”

In January, the Trump administration announced it was considering rolling back updates to the Regional Haze Rule — updates that were developed during the Obama administration to reduce air pollution in national parks.

FMI:  You can read the new study in full on the website for Science Advances, which is a publication of the America Association for the Advancement of Science. The article written by the study’s authors for The Conversation can also be read online.