Gun-related homicides in the United States have risen by almost a third in recent years, while homicides from the other two most common methods of murder — knives and suffocation — have remained flat, according to data published late last week by the Centers for Disease Control and Prevention (CDC).

Using mortality data from the National Vital Statistics System, CDC analysts found that the number of deaths from all three methods of homicide stayed essentially the same from 2010 through 2014. That flat trend continued during 2015 and 2016 for knife- and suffocation-related murders — but not for gun-related ones.

Guns were also the focus of a study published late last week in the journal JAMA Network Open. Researchers found that larger-caliber firearms (ones with larger barrels and, thus, larger bullets) are much more likely to kill a shooting victim than smaller-caliber ones.

Yes, that may sound like a “duh” finding. But as the study’s authors point out, these results undercut a common argument put forward by people who are against gun regulation — the idea that “guns don’t kill people; people kill people.”

“That slogan is based on the contention that gun control is ineffective because if a person wants to kill someone, they will find a way to do it, no matter what types of weapons are available.” said Anthony Braga, the study’s lead author and a professor of criminal justice at Northeastern University, in a released statement.

The new study suggests otherwise, however.

For the study, Braga and Philip J. Cook, a professor emeritus of economics and public policy at Duke University, analyzed five years of assault data (2010-2014) collected by the Boston Police Department.

They found that shootings with larger-caliber guns were significantly more deadly. 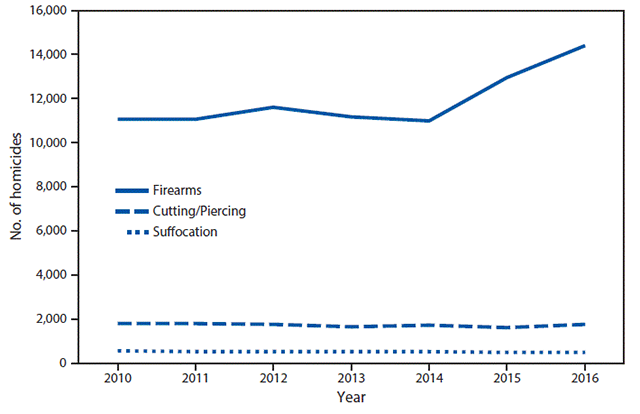 Source: National Vital Statistics System, Underlying Cause of Death Data, 2000–2016
The three most common methods of homicide are based on numbers of deaths.

Braga and Cook calculated that replacing medium- and large-caliber guns with small-caliber guns would have resulted in 39.5 percent fewer gun-related deaths.

“It is plausible,” the two men write in their study, “that larger reductions would be associated with replacing all types of guns with knives or clubs.”

The study has several limitations. Most notably, it is observational, and therefore can’t prove a direct causal connection between gun caliber and the likelihood of a gunshot wound being fatal. Also, the study used data from only one city and during a single five-year period.

It’s also possible, as Braga and Cook acknowledge in their paper, that assailants using higher-caliber weapons are more accurate shooters or more determined to kill their victim.

Still, the study’s findings support other research (going back more than three decades) that has pointed to bullet size and weight as being important variables in whether shootings prove fatal.

That means we need to be focusing gun-related policy on the guns themselves as well as on the people who use them.

“While it is true that people kill people, it is also true that guns kills people,” said Braga. “As such, gun control could matter in preventing homicides.”

For more info:The CDC analysis was published as a “QuickStats” report in the July 27 issue of Morbidity and Mortality Weekly Report, where it can be read in full.  Braga and Cook’s study can be read online at the website for JAMA Network Open.