Less than a quarter of American adults — 22.9 percent — get the minimum amount of exercise recommended by federal guidelines, according to a new study from the Centers for Disease Control and Prevention (CDC).

That percentage surpasses — barely — the U.S. government’s Healthy People 2020 target goal of 20.1 percent. Yet, as the CDC report also notes, the extent to which U.S. adults get enough exercise depends a lot on what state they live in, what their gender is and whether or not they’re working.

Minnesotans are, on average, better about exercising than people living in most other states, although we’re not at the top of the list.

Those bragging rights go to Colorado.

For the study, CDC researchers used data collected from the 2010-2015 National Health Interview Survey in all 50 states and the District of Columbia. As part of the survey, respondents are asked questions about health-related activities, including how much physical activity they get.

Federal physical activity guidelines recommend that adults aged 18 to 64 engage in at least 150 minutes of moderate intensity or 75 minutes of vigorous-intensity aerobic exercise each week, as well as twice-weekly muscle-strengthening activities.

People who meet those guidelines are at significantly lower risk for a variety of chronic medication conditions, including heart disease, type 2 diabetes, depression and certain types of cancer. They’re also less likely to develop a disability or to die prematurely.

The CDC study found that while 22.9 percent of adults nationally met the federal physical activity guidelines, the percentage varied widely by state, from a low of 13.5 percent in Mississippi to a high of 31.5 percent in Colorado.

Minnesota ranked ninth, with 27.7 percent of the state’s residents meeting the federal guidelines.

The CDC researchers say they were surprised that many of the states with the highest percentages of meeting the guidelines were in “cold weather” states.

“How are people in these states meeting these guidelines during the colder winter months?” two of the researchers wrote in a National Center for Health Statistics blog post about the study. “Are they participating in outdoor winter sports, do they exercise at indoor facilities, or some combination of outdoor and indoor activities? Unfortunately we can’t answer these questions with our data, but it would be interesting to know.” 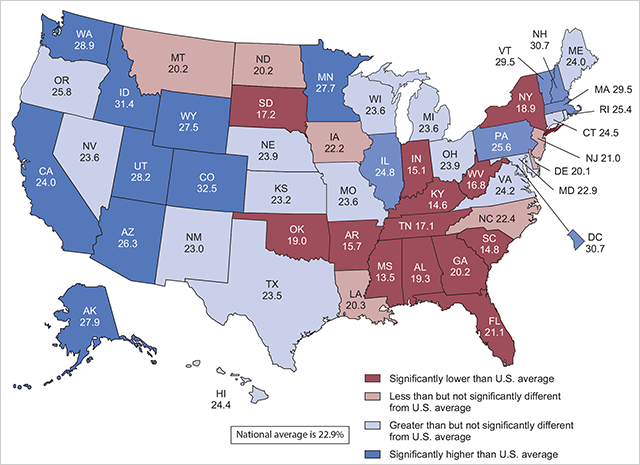 When people’s work status was taken into account, both men and women with jobs were more likely to exercise than their nonworking peers.

That wasn’t true everywhere, however — including in Minnesota. A higher proportion (32.8 percent) of nonworking men in the state met the federal physical activity guidelines than did working men (30.5 percent).

Minnesota’s working women, on the other hand, were significantly more likely than its nonworking women to meet the guidelines (26.8 percent vs. 15.0 percent).

The study comes with caveats, of course. Most notably, the data included exercise done only during “leisure time,” or nonworking hours. Participants weren’t asked about physical activity done in the workplace or while commuting, and so those forms of activity were not measured. As the CDC researchers point out, people whose physical activity fits into those two categories may be less likely to engage in leisure-time physical activity.

Although active modes of commuting to work, such as walking or biking, has been associated with a reduced risk of cardiovascular disease and early death, on-the-job physical activity has not. In fact, as I reported in Second Opinion earlier this year, men with physically strenuous jobs may be at a higher risk of early death than men with sedentary jobs.

“The choices that Americans make regarding both their occupation and state of residence can have very real consequences for their morbidity, disability, and mortality,” the CDC researchers conclude.

FMI: You can read the CDC’s report online. You’ll find information on how to incorporate more physical activity into your daily life on the National Heart, Lung and Blood Institute’s website.