Turning blighted, vacant urban lots into well-maintained green spaces is associated with reduced feelings of depression and worthlessness and an improvement in overall mental health among people living nearby, a new study has found.

The effect appears to be most pronounced in neighborhoods where significant numbers of residents live below the poverty line, the study also reports.

“The findings support [the idea] that exposure to more natural environments can be part of restoring mental health, particularly for people living in stressful and chaotic urban environments,” said John MacDonald, one of the study’s authors and a professor of criminology and sociology at the University of Pennsylvania, in a released statement.

Earlier this year, the same group of researchers found that the greening of vacant lots was linked to a 29 percent drop in gun violence in nearby neighborhoods.

The current study is the first one, however, to investigate whether such greening interventions can have an effect on mental health.

About 15 percent of land in U.S. cities is considered vacant or abandoned — an area roughly equivalent in size to that of Switzerland.

For the current study, 541 vacant lots scattered across Philadelphia (selected from more than 34,000 eligible ones) were randomly divided into three groups. One group was “greened,” which involved removing all trash and debris, grading the land, planting new grass and a few trees, and installing a low post-and-rail fence around the lot’s perimeter. The greened lots also received regular monthly maintenance.

A second group of vacant lots was cleaned up, but not greened. These lots had their trash removed and their grass mowed (when possible) — changes that were then maintained with monthly upkeeps.

The remainder of the vacant lots — the study’s “control group” — had nothing done to them.

All greening, trash removal and maintenance work was done by the Pennsylvania Horticultural Society.

To measure the effect of the revitalization of the vacant lots on people’s mental health, the researchers interviewed a random selection of 342 adults who lived within a quarter of a mile of one of the study’s lots.

Each participant answered detailed questions on two separate occasions: 18 months before and 18 months after the lots were revitalized. The questions included a widely used community-screening tool that assesses mental illness. The participants were asked to indicate how often within the previous 30 days they had felt nervous, hopeless, restless, depressed and worthless, as well as how often they felt that everything was an effort.

When the researchers compared the before- and after-revitalization answers, they found two statistically significant changes: People living near the greened lots experienced a 41.5 percent decrease in feelings of depression and a 50.1 percent decrease in feelings of worthlessness compared to those who lived near the lots that had not been greened. 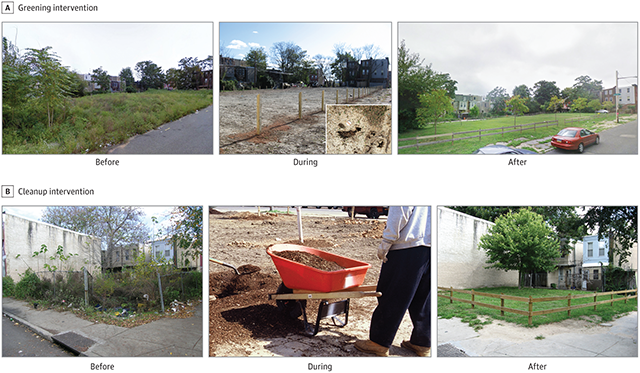 JAMA Network Open
Images show blighted pre-period conditions and remediated post-period restorations. Image A shows the grass-seeding method used to rapidly complete the treatment process. The after-image in B shows the low wooden perimeter fence. Vacant lots shown here are representative of those in the study, although for purposes of confidentiality are not actual study lots.

The greening of the vacant lots had the biggest impact on people living in neighborhoods below the poverty line. Feelings of depression, for example, dropped by more than 68 percent among residents living near a greened lot in those neighborhoods.

No significant changes in the measures of mental health were found, however, among people living near the lots that had their trash removed but were not greened.

“The lack of change in these groups is likely because the trash clean-up lots had no additional green space created,” said MacDonald.

The study comes with several caveats. It included, for example, a relatively small number of participants, and all of them lived in a single city. It also used only a single community-screening tool to assess the residents’ mental health. Other screening tools might have produced different results.

In addition, the study followed people for only 18 months after the greening of the vacant lots. It’s not known if the observed improvements in the residents’ mental health persisted past that time period.

MacDonald and his colleagues believe, however, that their findings “provide support to health care clinicians concerned with positively transforming the often chaotic and harmful environments that affect their patients.”

The findings demonstrate, they say, that the greening of vacant lots — in conjunction with individual interventions — can help improve mental health problems, particularly in low-resource neighborhoods.

It’s an affordable intervention, the researchers stress — costing about $1,600 per vacant lot and about $180 per year for maintenance.

“Greening vacant land is a highly inexpensive and scalable way to improve cities and enhance people’s health while encouraging them to remain in their home neighborhoods,” said Charles Branas, the study’s senior author and an epidemiologist at Columbia University, in a released statement.

“While mental health therapies will always be a vital aspect of treatment, revitalizing the places where people live, work, and play, may have broad, population-level impact on mental health outcomes,” he added.

FMI: The study was published online in the journal JAMA Network Open, where it can be read in full.