Any food can get contaminated with bacteria, viruses, parasites or other pathogens that can make us sick.  Just recently, chopped romaine lettuce and packaged pasta salads have been linked to serious outbreaks of food-borne illness.

But the food that triggers the most food-borne illnesses is chicken, followed by pork and seeded vegetables, according to a new analysis by the Centers for Disease Control and Prevention (CDC).

Food-borne illnesses — “food poisoning” — are a major public health problem across the United States, causing an estimated 48 million people to get sick each year. In most cases, the symptoms — nausea, vomiting, stomach cramps and diarrhea — go away within a day or two without any lingering health consequences. But food-borne illnesses can be dangerous. Each year, they send an estimated 128,000 Americans to the hospital with serious complications, including organ failure, sepsis and paralysis. About 3,000 of those people die.

Bacteria, viruses and parasites are the most common causes of food-borne illnesses, although harmful toxins and chemicals can also contaminate food and make people sick.

Most people who develop one of these illnesses remain unaware that it was caused by something they ate. Instead, they are likely to blame their symptoms on “the stomach flu.”

To investigate the specific causes of food-borne illness outbreaks — occurrences in which two or more people got the same illness after eating a common food — CDC researchers looked at data collected from 2009 through 2015 by the Foodborne Disease Outbreak Surveillance System.

They identified 5,760 reports of outbreaks during that period — outbreaks that resulted in 100,939 illnesses, 5,699 hospitalizations and 145 deaths.

Although the outbreaks occurred in all 50 states, as well as in the District of Columbia and Puerto Rico, most (97 percent) were limited to a single state. The 3 percent that involved more than one state, however, were particularly virulent. They were responsible for 11 percent of the illnesses, 34 percent of the hospitalizations and 54 percent of deaths.

Minnesota reported 404 food-borne illness outbreaks during the study period, giving it one of the highest numbers and rates of such outbreaks among all the states. That high ranking, however, is more likely the result of better reporting by Minnesota’s health officials than of a greater incidence of the illnesses.

The most common pathogens

As the CDC researchers note, “Most foodborne norovirus outbreaks are associated with ready-to-eat foods contaminated during preparation by infected food workers in restaurants and other food service settings.” 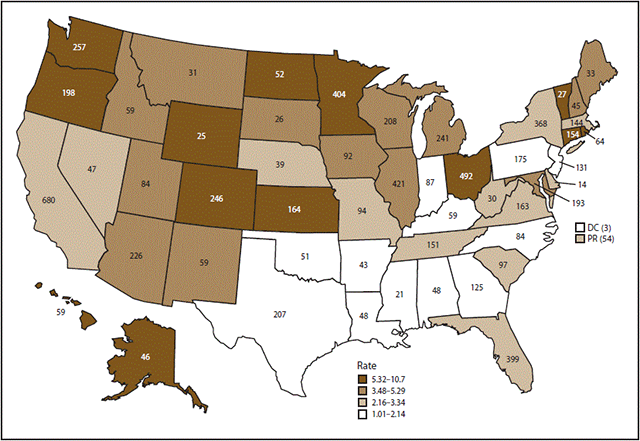 The second most common source of the outbreaks was salmonella, a bacterium, which was traced to 96 outbreaks (30 percent) and 23,662 illnesses (35 percent).

The CDC researchers also looked at the links between specific foods and the outbreaks. The category of food most implicated was fish, which was linked to 222 (17 percent) of the 5,760 outbreaks.

But the number of illnesses associated with fish-related outbreaks tended to be small compared to other foods — largely because of the pathogens involved, say the CDC researchers.

“Differences in outbreak size are in part attributable to how pathogens contaminate foods: toxins are produced in individual fish, whereas Salmonella and other bacterial pathogens, such as STEC, can contaminate large amounts of product across vast distribution chains,” they write. “This helps explain why bacterial pathogens are the most common causes of multistate outbreaks and why many persons can become ill during a single bacterial disease outbreak.”

Chicken was the food category responsible for most (3,114, or 12 percent) of the outbreak-related illnesses during the period studied, followed by pork (2,670, or 10 percent) and seeded vegetables like cucumbers and peppers (2,572, or 10 percent).

Some of the outbreaks could be traced back to a single location. Restaurants were associated with the most outbreaks (2,880 outbreaks, or 61 percent), followed by catering or banquet facilities (636, or 14 percent) and private homes (561, or 12 percent).

The identification of these more unusual sources of food-borne illnesses “provides insight into evolving food preferences in the Untied States an the types of foods that pathogens can contaminate,” say the CDC researchers. “It also raises important scientific questions regarding how these pathogens remain viable in these foods long enough to cause infection.”

The CDC analysts urge policymakers to “strengthen the capacity of state and local health departments to investigate and to report outbreaks.”

FMI: The CDC analysis of food-borne illness outbreaks was published in the July 27 issue of Morbidity and Mortality Weekly Report, where it can be read in full. For information about preventing food-borne illnesses — and about how to report them to state health officials — go to the Minnesota Department of Health’s “Foodborne Illness” webpage.

Chicken leads the list of foods that cause food-borne illnesses, CDC study finds