Most high-income countries experienced a drop in life expectancy in 2015 — the first in decades — but only the United States and the United Kingdom saw that troubling trend continue into 2016, according to a study published late last week in the BMJ.

A second study, appearing in the same journal, found that recent declines in Americans’ life expectancy is due in part, but not solely, to drug overdoses, suicides and alcoholism, the so-called “deaths of despair.”

As the authors of these studies point out, a drop in life expectancy needs to be taken seriously, as it can be a harbinger of a prolonged health crisis, driven by longstanding society-wide problems that haven’t been addressed.

The researchers focused on the years 2014-2016 because previous research has shown that life expectancy in the U.S. dropped significantly between those years. Ho and Hendi wanted to see if a similar decline had occurred anywhere else.

They found that 14 of the countries (all except Australia, Japan, Denmark and Norway) experienced declines in life expectancy for both men and women from 2014 to 2015.

The finding was notable “both for the number of countries and for the magnitude of the declines,” write Ho and Hendi. The declines averaged about 0.20 years for both men and women — about twice as large as the average past declines for women and 70 percent larger for men.

A further dive into the data revealed that the fall in life expectancy in non-U.S. countries in 2015 was largely among people aged 65 and older and was probably related to a severer-than-normal flu season.

In the U.S., however, the drop in life expectancy was more concentrated among people under the age of 65, particularly those in their 20s and 30s, and appears to have been largely driven by external, non-disease-related causes, particularly opioid overdoses and motor-vehicle-related injuries.

The study was not designed to determine the reasons for changes in life expectancy rates, so Ho and Hindi can only speculate on why the rates didn’t recover in the U.S. and the U.K. as they did in the other countries.

Strong contenders for contributing factors, they say, are increasing social and economic inequality and declining access among some groups of people to quality health care. “It is possible that greater inequality within a country renders that country more vulnerable to declines in life expectancy,” Ho and Hendi write.

Income inequality is a widespread problem, but it has been growing faster in the United States than in European countries in recent years. That may explain, at least in part, why the U.S. “has the lowest life expectancy levels among high income developed countries, and Americans fare poorly across a broad set of ages, health conditions, and causes of death compared with their counterparts in these countries,” write Ho and Hendi.

Socioeconomic inequality in the U.K., however, has also been increasing, and the British government in recent years has been cutting funding to health care and social welfare programs — actions that hit low-income people the hardest.

The second BMJ study, led by Dr. Steven Woolf, a social epidemiologist at Virginia Commonwealth University, suggests that the drop in U.S. life expectancy is much broader than the opioid epidemic.

For the study, Woolf and his colleagues looked at death rates among Americans aged 25 to 64 across racial and ethnic groups between 1999 and 2016. Previous research had identified a rise during that period in fatal opioid overdoses and other “deaths of despair” among white, middle-aged Americans. 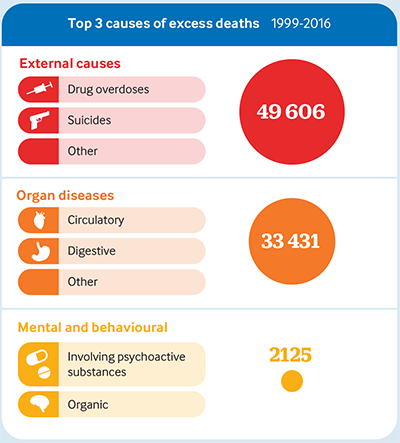 Woolf’s team discovered, however, that although drug overdoses, suicides and alcoholism were the main reasons for the past decade-and-a-half increase in deaths among middle-aged Americans, this age group also experienced a significant increase in deaths from heart, lung and other organ diseases and from mental and behavioral disorders.

“The opioid epidemic is the tip of an iceberg,” Woolf said in a statement released by the BMJ.

The study also found that it’s not just middle-aged whites who are dying at greater rates than in the past.

“The unfavorable mortality pattern that began for some groups in the 1990s is now unfolding among Hispanics and non-Hispanic blacks, a development made more consequential” by the fact that Hispanics and blacks have higher death rates to begin with, point out Woolf and his colleagues in their paper.

These findings suggest, say the study’s authors, that “no single factor, such as opioids” explains the increasing death rates of middle-aged Americans. The study also “signals a systemic cause and warrants prompt action by policy makers to tackle the factors responsible for declining health in the US,” they add.

FMI: You can read both studies in full at the BMJ website.

Life expectancy in U.S. falls; opioids and other ‘deaths of despair’ explain part of the drop