Sexually transmitted disease (STD) rates in the United States have reached record highs for the fourth year in a row, according to a new report released Tuesday by the Centers for Disease Control and Prevention (CDC).

In 2017, almost 2.3 million cases of chlamydia, gonorrhea and syphilis were diagnosed in the U.S., preliminary data compiled by the agency shows.

That number exceeds the previous record of 2.1 million set in 2016, and is 31 percent higher than the 1.8 million cases diagnosed just four years earlier, in 2013.

“We are sliding backward, said Dr. Jonathan Mermin, director of the CDC’s National Center for HIV/AIDS, Viral Hepatitis, STD, and TB Prevention, in a released statement. “It is evident the systems that identify, treat, and ultimately prevent STDs are strained to near-breaking point.”

A similar trend has been seen in Minnesota. Earlier this year, the Minnesota Department of Health (MDH) reported that STDs increased 8 percent between 2016 and 2017. The total number of chlamydia, gonorrhea and syphilis cases in the state in 2017 was 30,981, a record high.

According to the CDC’s national data, gonorrhea cases rose 67 percent between 2013 and 2017 (from 333,004 to 555,608 cases). Gonorrhea diagnoses among men jumped the most, almost doubling during that period. CDC officials are also concerned, however, with the speed with which gonorrhea cases are increasing among women.

All three of these STDs are currently treatable with antibiotics, but most cases go undiagnosed and untreated, “which can lead to severe adverse health effects that include infertility, ectopic pregnancy, stillbirth in infants, and increased HIV risk,” according to the CDC.

Of particular concern to health officials is the rapid rise in gonorrhea cases. As the CDC’s press release points out, “over the years, gonorrhea has become resistant to nearly every class of antibiotics used to treat it, except for ceftriaxone, the only remaining highly effective antibiotic to treat gonorrhea in the United States.”

Many health officials believe it is only a matter of time before the first super-resistant case of gonorrhea appears in the U.S.

Kris Ehresmann, infectious disease director at the Minnesota Department of Health, said in an interview with MinnPost that she wasn’t surprised by the increases in STDs reported by the CDC. Similar increases have been seen in Minnesota.

Ehresmann cited several possible factors behind both the state and the national increases.

Condom use has declined, she noted, because some people are less concerned about contracting HIV than they were in the past due to the development of more effective treatments for that infection.

“But the drugs that can prevent HIV do not protect against STDs,” Ehresmann stressed.

Another possible factor, she said, is the growing popularity of dating apps, like Tinder.

“It’s much easier for people to hook up with a partner than it would have been in the past,” Ehresmann said. 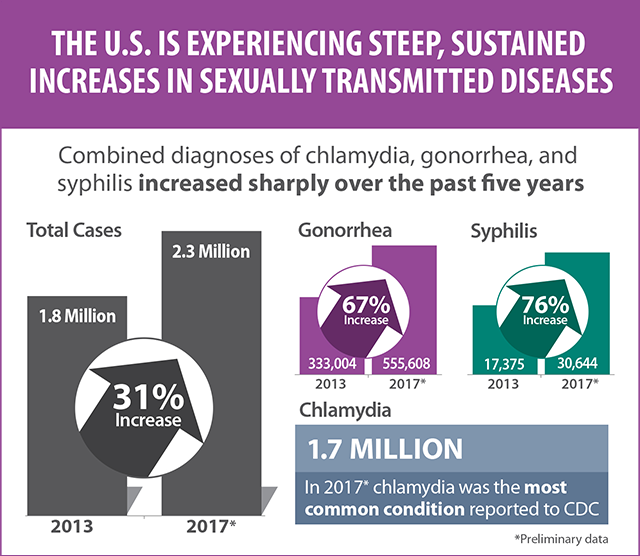 Many people are also unaware that they need to undergo repeated STD testing, particularly because these infections are often symptomless in their early stages.

“Our recommendation is, if you are sexually active or if you inject drugs, you should be tested at least once a year for sexually transmitted diseases,” said Ehresmann.

“We also need to be having more conversations about healthy sexuality,” she added. “As much as it’s in the media, we really don’t talk about it.”

Ehresmann also points to declining federal funding for the prevention and control of STDs as a factor behind the increasing number of diagnoses of these diseases.

“The resources to address STDs have not at all kept pace,” she said.

In a CDC-arranged press conference in Washington, D.C., on Tuesday, health officials were even more blunt about declining resources.

“The U.S. continues to have the highest STD rates in the industrialized world,” said David Harvey, executive director of the National Coalition of STD Directors, “and it preys on the most vulnerable among us.”

He pointed out that federal funding to prevent and control STDs has dropped by roughly 40 percent in the past 15 years.

“Here’s a quote for members of the media,” Harvey added. “Ready? It is time that President Trump and Secretary [of Health and Human Services Alex] Azar declare STDs in America a public health crisis.”

FMI: You can read the CDC report on the agency’s website.

‘This is about fighting a war’: former Medicare administrator Andy Slavitt on what to expect in the months to come

Amid COVID-19 uncertainties, Minnesota colleges are trying to hang on to prospective students

A simple guide to safe social distancing when getting some exercise