To prevent their children from getting colds, seven out of 10 American parents rely on “folk” remedies, vitamin supplements or other strategies that aren’t backed up by science, according to a new survey conducted by the University of Michigan’s C.S. Mott Children’s Hospital.

Fortunately, almost all of the parents surveyed also said they encourage their children to practice good hygiene, such as washing their hands frequently, to ward off colds. That strategy has been proven to work.

The survey, which was taken last October, involved a nationally representative sample of 1,119 parents who had at least one child between the ages of 5 and 12.

“The positive news is that the majority of parents do follow evidence-based recommendations to avoid catching or spreading the common cold and other illnesses,” said Dr. Gary Freed, co-director of the survey and a pediatrician at the University of Michigan, in a released statement.

“However, many parents are also using supplements and vitamins not proven to be effective in preventing colds and that are not regulated by the U.S. Food and Drug Administration,” he added. “These are products that may be heavily advertised and commonly used but none have been independently shown to have any definitive effect on cold prevention.”

Colds, which are caused by viruses, are typically spread from infected people to others via mucous droplets. When an infected person coughs or sneezes, the mucous is expelled out of the body at speeds that can reach 50 miles per hour. The heavy droplets fall onto surfaces, while the lighter ones keep airborne. The virus can stay alive within those droplets for hours.

A child (or adult) who breathes in the infectious droplets or who touches an infected surface and then touches his or her nose, eyes or mouth can then “catch” the cold, although symptoms may not begin to appear for up to a week later.

School-aged children have an average of three to six colds a year, according to background information provided in the survey report. Some of those colds can last as long as two weeks.

“As a result, it can seem to parents like their child is almost always sick during the cold season,” the authors of the report write. “While many parents strive to prevent their child from catching a cold, not all parents understand which strategies are evidence-based and will make a difference in cold prevention.”

What works — and what doesn’t

To protect against colds, experts recommend three basic strategies: Wash your hands often with soap and water; avoid touching your nose, eyes or mouth with unwashed hands; and stay away from people who are sick. Those tactics will help keep infectious viruses from entering your body.

Among the surveyed parents, 99 percent said that their approach to preventing colds involved such strategies. But 51 percent reported that they gave their children over-the-counter vitamins or other supplements, especially Vitamin C, zinc and Echinacea, as well. Also popular were supplements advertised as immune-system “boosters.”

None of those products has been show to be effective in preventing colds, stress Freed and his colleagues. The researchers also point out that under U.S. regulations, a supplement’s effectiveness does not need to be proven for it to be sold.

Again, those folk remedies have been found to be ineffective. They stem from a time when people lacked the knowledge that germs cause illnesses like the common cold.

We know better now, or should. 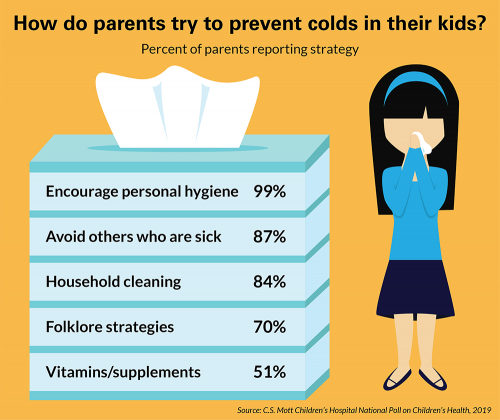 Although going outside won’t put children (or adults) at greater risk of getting a cold, going anywhere where people are coughing and sneezing will.

But keeping kids in a cough-and-sneeze-free zone “can be difficult for parents when relatives with colds want to hug and/or kiss their child,” the report acknowledges. “However, explaining to family members how easily colds can be spread can help everyone to understand how to keep healthy during common cold season.”

“It can also be hard for parents to have their child avoid all activities where they might come in contact with other kids who are sick, as they can never know who will actually attend,” the report adds.

The best remedy, therefore, is to practice good personal hygiene. Make sure your children wash their hands often.

And be sure to do the same yourself.

FMI: You can read the full report on the survey at C. S. Mott Children’s Hospital’s website.