Americans were more stressed, worried and angry last year than at any other time during the past decade, according to Gallup’s latest Global Emotions Report, which was released on Friday.

In fact, the report, which is based on more than 151,000 interviews conducted in 143 countries, found that Americans were among the most stressed-out people in the world last year.

About 55 percent of the Americans polled by Gallup in 2018 said they had experienced stress during much of previous day. That put the United States in a fourth-place tie with Albania, Iran and Sri Lanka for most stressed-out population. Only Greece, the Philippines and Tanzania had higher rates of stress.

The global average for stress across all the countries was 35 percent.

Higher than during Great Recession

The report also found that almost half (45 percent) of Americans said they had worried a lot on the day before they were surveyed, and almost a quarter (22 percent) said they had felt a lot of anger on that day — the highest rates in the U.S. in more than a decade.

“The levels of negative emotions in the past several years are even higher than during the U.S. recession years,” the report points out.

The proportion of Americans who said they were worried was significantly higher than the global average (39 percent), but the U.S. wasn’t anywhere near the top of the list for most-worried population. That list was headed by Mozambique, Chad and Benin, where 60 percent or more of the people surveyed reported being very worried.

The least-worried countries in 2018 — those with 20 percent or less of their populations expressing significant worry — were Taiwan, Kyrgyzstan, Kazakhstan, Singapore and Uzbekistan. 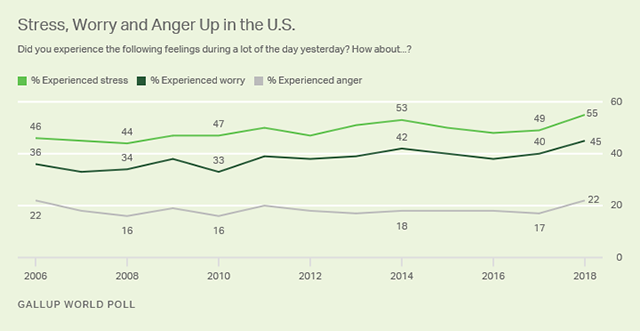 Although more Americans said they were angry in 2018 than in past years, the proportion was the same as the global average (22 percent). Americans were half as likely to be angry as people living in the five most-angriest countries (Armenia, Iraq, Iran, the Palestinian Territories and Morocco), where 41 percent or more of the people surveyed by Gallup reported experiencing that emotion a lot.

The least-angry countries in 2018 — those with 8 percent or less of their populations saying they felt angry — were Estonia, Singapore, Finland, Mauritius and Mexico.


Income also made a difference — at least in terms of stress and worry. Among the Americans surveyed, 68 percent of those with household incomes in the lowest fifth of the U.S. population said they had experienced a lot of stress on the day before, compared to 46 percent of those in the richest fifth. The results were similar for worry, with 56 percent those in the poorest group saying they had experienced a lot of worry compared to 41 percent in the richest group.

They weren’t much more likely, however, to say they felt angry (23 percent vs. 20 percent).

Not everything came up negative for the United States in Gallup’s poll. Among the Americans surveyed, 82 percent said they had experienced a lot of enjoyment on the previous day, which was higher than the global average (71 percent).  And 80 percent of the Americans said they had smiled or laughed a lot on the previous day, a proportion that was also higher than the global average (74 percent).

Furthermore, when asked whether they had been treated with respect on the day before they were surveyed, 90 percent of Americans said “yes,” which was slightly higher than the global average (87 percent).

And almost two-thirds (64 percent) of the Americans surveyed reported that they had learned or done something interesting the previous day. Globally, only half of the respondents (49 percent) said that had happened to them.

FMI: You can find the report, including an interactive map that shows how countries compare with each other on 10 positive and negative experiences, on Gallup’s website.