Drug overdose deaths in the United States may have fallen by 5 percent in 2018, according to preliminary data released Wednesday by the Centers for Disease Control and Prevention (CDC).

Specifically, the CDC’s preliminary data estimate that more than 68,500 people died of drug overdoses in 2018, compared to about 72,000 in 2017. Both numbers are likely to change as the data become finalized, but if the overall trend holds, it would represent the first drop in drug overdose deaths in the U.S. since 1990.

That 68,500 number is still shockingly high, however. It makes 2018 the second worst year for drug overdose deaths in U.S. history. It also means (as the New York Times points out) that drug overdoses claimed more lives in 2018 than did car crashes, HIV/AIDS and guns during their most deadly years.

Last year’s decline in drug overdose deaths appears to be driven almost entirely by fewer deaths from prescription opioids, the medications that have been fueling a massive drug addiction epidemic since the late 1990s. Overdose deaths caused by those drugs fell from around 49,000 in 2017 to an estimated 47,600 in 2018, according to the CDC’s preliminary data.


For comparison, in 1999 — as the prescription opioid epidemic was just beginning to gather steam — about 16,800 Americans died from overdoses from all types of drugs.

In their report on the preliminary data, CDC officials estimated that drug overdose deaths in Minnesota had dropped from 730 in 2017 to 638 in 2018 — a 12.6 percent decline. Last week, the Minnesota Department of Health (MDH) reported that its preliminary data suggested a drop of 17 percent, from 733 deaths in 2017 to 607 in 2018. (The MDH numbers are likely to be more up-to-date than the CDC ones.)

As was also true nationally, deaths from synthetic opioids, primarily fentanyl, continue to climb in Minnesota. MDH officials estimate that 195 Minnesotans died from synthetic opioid overdoses in 2018. In 184 of those cases (85 percent), fentanyl was listed on the death certificate as a contributing factor. 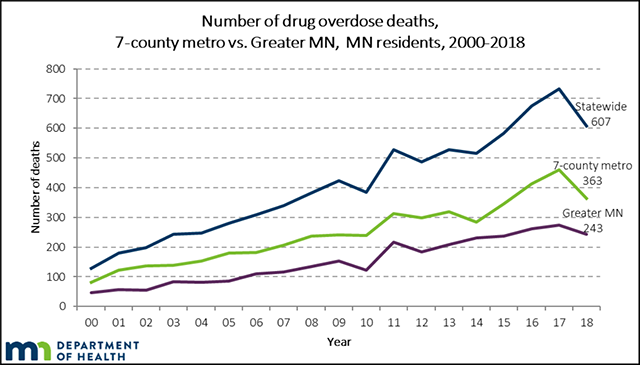 “It’s encouraging to see this turn-around in the trend in 2018 as Minnesota has implemented a broad range of efforts to prevent opioid misuse and combat the overdose crisis,” Minnesota Commissioner of Health Jan Malcolm said in a statement that accompanied the release of its preliminary data.

“This is good news,” she added, “but we want to emphasize that this is still preliminary data and that overdose deaths continue to remain at historic highs. There is still much work that needs to be done to end this crisis and mitigate its effects.”


FMI: You can read the CDC report on the agency’s website. The MDH report can be read online as well.