People whose cardiovascular health is in good shape at age 50 are less likely to develop dementia later in life, according to British researchers.

These findings, published earlier this month in The BMJ (formerly the British Medical Journal), support the idea that having heart-healthy habits throughout life serves as an effective preventive measure not just against heart disease and stroke, but also against dementia.

As background information in the study points out, dementia is a progressive condition. Changes in the brain associated with dementia can start 15 to 20 years before any clinical symptoms appear.

Most previous studies have tended to investigate only the cardiovascular risk factors for dementia that exist late in life. The current study takes a longer view, examining the factors that are present many years earlier, in midlife.

The authors of the study specifically looked to see if they could find a link between people’s “Life’s Simple 7” cardiovascular health scores at midlife and their risk of dementia two decades later.

“Life’s Simple 7” is a tool developed by the American Heart Association to help people make changes in their life to improve their heart health. The scores are based on seven metrics. Four are behavioral: smoking, diet, physical activity and body mass index (BMI). The other three are biological: fasting blood sugar (glucose) levels, blood cholesterol levels and blood pressure.

Other research has found that people with higher “Life’s Simple 7” scores tend to have a lower risk of developing heart disease, stroke and type 2 diabetes. 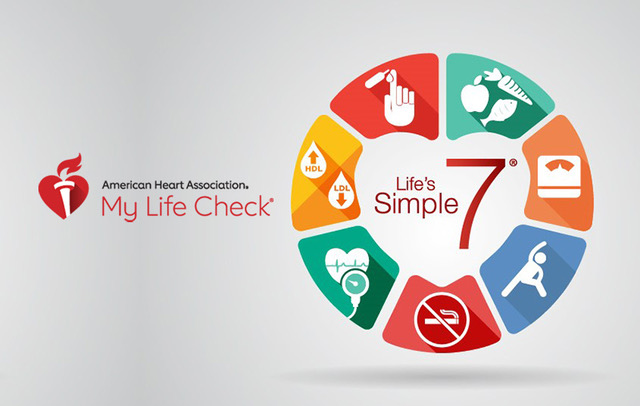 For the current study, researchers used data collected from 7,899 British adults participating in the long-running Whitehall II health study. The data included information that enabled the researchers to give each participant a “Life’s Simple 7” score at age 50. Based on their scores, the participants were categorized as having either “poor,” “intermediate” or “optimal” cardiovascular health.

Over the next 25 years, 347 of the participants were medically diagnosed with dementia. The average age for that diagnosis was 75.

After accounting for other factors that may potentially influence the risk of dementia, including gender, ethnicity, educational level, occupation and marital status, the researchers found a link between the participants’ “Life’s Simple 7” scores at midlife and their risk of developing dementia at an older age.

Furthermore, this association was observed even among people who did not go on to develop coronary heart disease or stroke during the follow-up period. That finding suggests that cardiovascular disease itself does not fully account for the association between the “Life’s Simple 7” scores and dementia, say the study’s authors.

The researchers also analyzed magnetic resonance imaging (MRI) data collected from about 700 of the participants at age 50 and then again at age 70. Those brain scans revealed an association between higher “Life’s Simple 7” scores at midlife and higher volumes of whole brain and grey matter in later years.

This is an observational study, so it can’t prove a connection between “Life’s Simple 7” scores and the risk of dementia. The participants also self-reported their behavioral data (on physical activity, diet and smoking), and such reports may not always be accurate.

In addition, the study’s participants — all civil servants — were healthier than the general British public, both in term of their risk factors and incidence of disease. The findings might have been different in a more diverse — and non-British — population.

Still, the studies results are in line with several other studies that reported a link between cardiovascular health in older age and the risk of dementia.

“Our findings suggest that the Life’s Simple 7, which comprises the cardiovascular health score, at age 50 may shape the risk of dementia in a synergistic manner,” the authors of the study conclude. “Cardiovascular risk factors are modifiable, making them strategically important prevention targets.”

And you don’t have to have perfect scores in all seven metrics to benefit, they add.

“Even small improvements in cardiovascular health metrics, without necessarily reaching the optimal level for each metric, are likely to be beneficial in reducing the risk of dementia,” the researchers stress.

FMI: You can read the study in full on The BMJ’s website. For detailed information about “Life’s Simple 7,” go to the AHA’s website.