One in seven alcohol-related motor vehicle deaths involves drivers with blood alcohol concentrations (BACs) below the legal limit, according to a sobering study published Monday in the American Journal of Preventive Medicine.

More than half of the people who died in those crashes were someone other than the drinking driver, and they were more likely to be young (under the age of 21) and female, the study also found.

“Our study challenges the popular misconception that alcohol-involved crashes primarily affect drinking drivers, or that BACs below the legal limit don’t matter,” said Dr. Timothy Naimi, the study’s senior author and a professor of community medicine at Boston University School of Public Health, in a released statement.

As background information in the study points out, drivers become physiological impaired well below the current legal limit of 0.08 percent. In fact, studies have shown that the risk of a crash begins to climb significantly once the driver’s BAC exceeds 0.02 percent.

It can take only a single alcoholic drink (such as a 12-ounce bottle of beer or a 5-ounce glass of wine) to reach a BAC of 0.02 percent.

Each year, more than 12,000 people lose their lives in motor vehicle crashes in which a driver has a positive BAC.

In 2018, the National Transportation Safety Board and the National Academies of Science, Engineering, and Medicine recommended that the legal BAC limit be reduced to 0.05 percent, saying it could save up to 1,790 lives a year. Yet there has been resistance to making that change. So far, Utah is the only state to have done so.

A close look at the data

To get a better understanding of how many motor vehicle crash deaths occur at BACs under the legal limit, Naimi and his co-authors analyzed data from the National Highway Traffic Administration’s Fatality Analysis Reporting System for the years 2000 through 2015. That database includes information about the BAC levels of drivers involved in fatal crashes.

More than 612,000 people died on American roads in motor vehicle crashes during the 16 years that were studied. Almost 40 percent of those deaths (223,000) occurred in crashes involving one or more drivers who had been drinking. 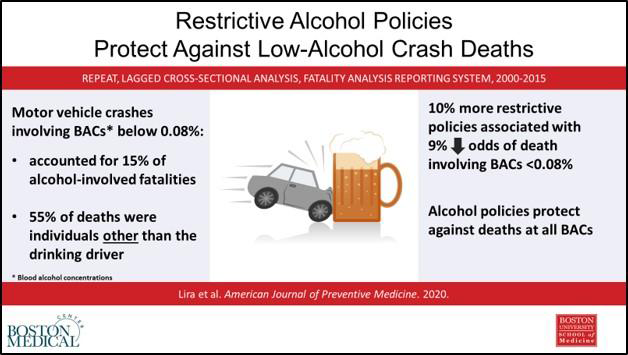 Most of those drivers had BACs above the legal limit. Yet, in 15 percent of the crashes, which killed more than 34,000 people, they weren’t. The driver had tested positive for alcohol, but not enough to be considered legally impaired.

Deadly motor vehicle crashes involving drivers with BACs under the legal limit were more likely to kill women and young people and to involve multiple vehicles, the data showed. Such crashes were also less likely to occur during a weekend or in the evening than those involving legally drunk drivers.

The researchers then looked to see if state alcohol policies had any effect on fatal crashes involving alcohol at levels below the legal limit. To do this, they first gave the states “Alcohol Policy Scale” scores. The scores were based on how many of 29 policies designed to reduce excessive alcohol consumption in general — and impaired driving in particular — the states had adopted between 1999 and 2014.

The policies include such things as increasing alcohol taxes, requiring keg registration and limiting alcohol availability in grocery stores.

The researchers found evidence that policies aimed at restricting alcohol lowered the odds of a motor vehicle crash involving alcohol below the legal limit by about 9 percent.

The study is observational, so it can’t prove a direct causal connection between stronger alcohol policies and drops in fatal motor vehicle crashes.

Still, the study found that a significant proportion of motor vehicle deaths occur during crashes in which drivers have BACs below the legal limit. It also found that the risk of a crash climbs steadily as drivers’ BACs increase.

“Lower alcohol crashes have been underestimated as a public health problem,” says Naimi.

“Strengthening alcohol policies could reduce alcohol-involved crash fatalities at all BAC levels,” he and his co-authors conclude.

Lowering the legal BAC limit would particularly save lives.

FMI: The study can be read in full at the website of the American Journal of Preventive Medicine.