Americans have experienced more mental health problems during the coronavirus pandemic than people living in other high-income countries, according to a report issued late last week by the Commonwealth Fund.

Americans are also experiencing greater financial hardship — a factor that has contributed to their higher levels of psychological stress — and are less likely than residents of other high-income countries to have a positive opinion of their national government’s pandemic response, the report found.

“As our country struggles with the surging number of cases and the economic havoc that the pandemic is wreaking, people in other countries are living a different, better reality,” says Dr. David Blumenthal, president of the Commonwealth Fund, a private nonprofit organization that supports research on health care issues, in a released statement. “Americans should realize that our country can do better, too.”

As of Monday morning, there have been more than 5 million confirmed cases of COVID-19 in the United States, and more than 162,000 Americans have died from the illness, according to a New York Times database. The country’s unemployment rate is at 10.2 percent — higher than the highest point during the Great Recession.

The data for the Commonwealth Fund’s report come from a cross-national health care comparison survey taken during the early months of the COVID-19 pandemic (March-May). For the survey, researchers interviewed a nationally representative sample of more than 8,200 adults in the U.S. and nine other high-income countries: Australia, Canada, France, the Netherlands, New Zealand, Norway, Sweden and the United Kingdom.

One in three (33 percent) of the U.S. adults reported experiencing levels of stress, anxiety and sadness during the pandemic that they found difficult to cope with by themselves. That percentage was significantly higher than in other countries, where no more than a quarter of adults said the same — from 10 percent in Norway to 26 percent in Canada and the U.K. 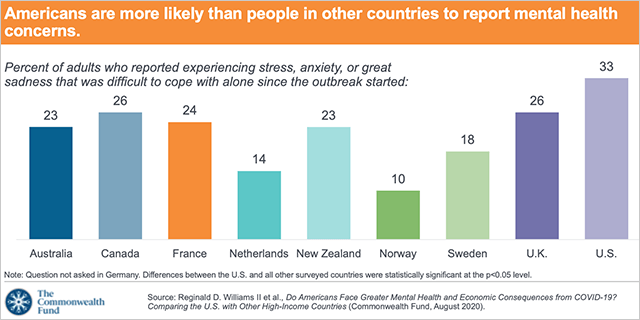 Even before the pandemic, however, the United States had one of the highest rates of mental health problems among high-income countries, with about a quarter of its adults reporting that they had been diagnosed with anxiety, depression or other emotional distress. The results from the new survey suggest that the pandemic has intensified that rate, the new report notes.

Also troubling was the finding that only one in three (31 percent) of U.S. adults said they are able to get the professional mental health care that they need during the pandemic — a figure similar to that in the U.K. (32 percent). In contrast, about half of people living in Australia (54 percent) and in Canada (47 percent) said they were able to get such help.

Around a third (30 percent) of U.S. adults also reported that the pandemic had harmed them economically, such as by causing them to be unable to pay for basic necessities, such as food, heat or rent, or forcing them to take out a loan to cover daily expenses. The proportion of people who said they had suffered financially were also high in Canada (24 percent) and Australia (21 percent), but quite low elsewhere, such as in France and Germany (6 percent).

“U.S. adults were significantly more likely than adults in France, Germany, Netherlands, New Zealand, Sweden, and the U.K. to report losing a job or source of income,” the report also points out.

Not surprisingly, a strong connection was found between the pandemic’s economic and psychological effects. More than half (56 percent) of U.S. adults who reported that the pandemic had exacted a financial toll on their lives also reported experiencing high levels of mental distress.

Across all the countries, large majorities of people said doctors, nurses and hospitals had done a good or very good job at handling cases of COVID-19, although the share of people who felt that way was significantly lower in Sweden (78 percent) and relatively lower in the U.S. (83 percent) and Canada (85 percent). The highest rates were in France (95 percent) and Germany (96 percent).

Americans were, however, the least likely to have a positive opinion of their national government’s pandemic response.

“Only 33 percent of U.S. adults said President Trump has done a ‘good’ or ‘very good’ job of handling the coronavirus pandemic,” the report notes. “In the other countries, at least 49 percent of respondents had positive views of how their president, prime minister, or central government has dealt with the crisis. Germany had the highest rate: 95 percent.” 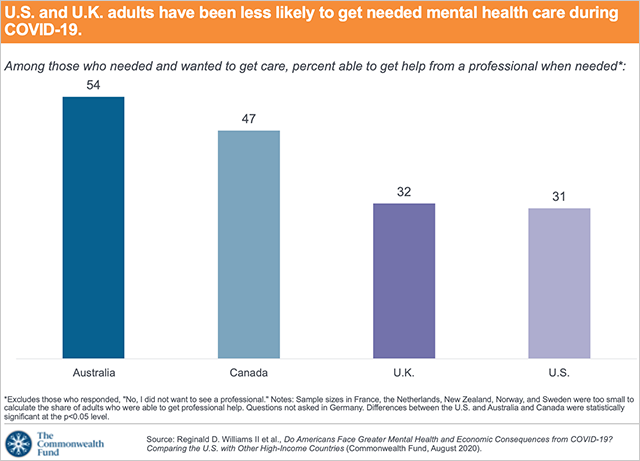 “It should be noted that prior to the outbreak, levels of public trust in government and national leaders were already relatively lower in the U.S. than they were in the other high-income countries included in our survey,” the report adds.

Americans were also among the least likely, along with the French and Swedish, to report that their state, regional, or local government leaders had done a good or very good job responding to the virus.

“What we learn from this study is that in the U.S., the pandemic has taken a greater toll on people’s well-being when compared to other high-income countries,” says Reginal Williams II, the report’s lead author and a vice president at the Commonwealth Fund, in a released statement. “As the number of confirmed COVID-19 cases and deaths in the U.S. continues to increase, policymakers — at all levels of government — should look abroad for innovative solutions. There are valuable lessons we can learn, particularly around improving access to mental health services, and addressing socioeconomic needs exacerbated by the pandemic.”

FMI:  You can read the full report on the Commonwealth Fund’s website.