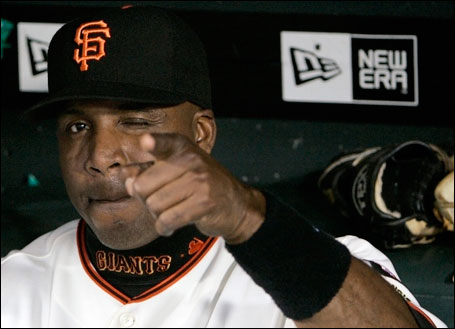 REUTERS/Robert Galbraith
Barry Bonds gestures before his last appearance as a Giant in San Francisco.

Barry Bonds, if convicted, faces up to 30 years in prison (a year or two would be more likely) and the loss of whatever chance he had, after years of alleged steroid use, of enshrinement in the Hall of Fame. The churlish, bulky slugger — Major League Baseball’s all-time home run leader — has been indicted by a federal grand jury on perjury and obstruction of justice charges.

Pete Rose, baseball’s all-time hits king, served time in prison on tax evasion charges and is stuck with a lifetime ban from the game and, for all practical purposes, from Cooperstown for violating rules against gambling.

At this rate, you might expect Denton True “Cy” Young, baseball’s all-time leader in pitching victories, to be getting nervous about now. Except that he’s been enshrined in the Hall since 1937 and entombed in Newcomerstown, Ohio, since 1955 on a nice little hillside plot overlooking the Appalachian mountains.

I’ve had it with Bonds
As a Hall of Fame voter, I’m done with Bonds; the evidence that he used banned substances to achieve an unfair competitive advantage is clear. On personality alone, he was an anti-ambassador for the game, repelling more fans than he attracted. As for the simplistic argument from some baseball scribes that “Bonds was a Hall of Famer even before he started cheating,” I ask: Does this mean Warren Buffet could rob a bank without penalty, since he already is rich?

Regardless of what happens to Bonds in our justice system, though, let’s leave the asterisks out of it, OK? As appealing* as it might be* to slap* a few of these* funky little punctuation* marks on Bond’s individual statistics*, his career numbers, and thus his records, almost certainly will stand, no matter how juiced.

This isn’t the National Collegiate Athletic Association, where everyone is instructed to break out a big eraser, rub vigorously, then act forever after as if the transgressors never existed.

According to the NCAA, for instance, the late Howard Porter’s Villanova team never made it to the 1971 Final Four because Porter had signed up with a sports agent. Michigan never won a certain 114 games in the 1990s because Chris Webber, Maurice Taylor and Louis Bullock, among others, were involved in cash handouts and other shenanigans.

And Clem Haskins’ Gophers teams later in that decade apparently didn’t show up for a bunch of games, the official record now claims, because of “a lack of institutional controls” rampant — (cough) bogus grades (cough) — in the basketball office at the time.

In October, shamed sprinter Marion Jones gave back three gold medals and two bronzes that she won at the Sydney Olympics in 2000, forfeiting the trophies after admitting that she used performance-enhancing drugs. The way the International Olympic Committee does it, other top finishers get bumped up — second to first, fourth to third, all on paper of course — to fill the voids. Cheaters get purged as if the CIA or KGB were in charge.

Different protocol in pro sports
Things don’t work that way in pro sports. The importance of stats, especially in baseball, means that numbers have to add up. For example, since a bunch of pitchers gave up 762 home runs to Bonds through the years, those home runs must be accounted for somewhere in the hitting stats.

There also, right or wrong, is a less sanctimonious view toward rules, conduct and sportsmanship in general, considering the charm with which people look back on Gaylord Perry’s Vaseline pitches, the New York Giants’ sign-stealing in 1951, Ty Cobb’s sharpened spikes or, here in Minnesota, Joe Niekro’s emery board in 1987.

Joe Jackson’s .356 career batting average, third all-time, still is in the books, along with the fixed World Series title thrown by his notorious team — the 1919 Chicago “Black Sox.” Rose’s 4,256 hits still rank No. 1, no matter how stubborn or unrepentant he’s been. Likewise, Bond’s 762 home runs have his name atop the heap, seven more than the gentlemanly Henry Aaron, 48 more than bodacious Babe Ruth and some indeterminate number more than Bonds would have hit without artificial enhancements.

And, y’know, that seems fitting. Having Bonds in possession of baseball’s gaudiest record, for however long it takes (hopefully) Alex Rodriquez to pass him, is a proper penalty for baseball dragging its heels on steroids, Bonds and his fellow cheats. It never should have taken four years for the indictment to come down; it never should have taken so long for all of us to trust our eyeballs about Mark McGwire, Sammy Sosa and their softball swats of 1998.

This is a great teaching moment, with Bonds’ highlights and hitting stats as terrific audio-visual aids for the class. Let’s keep them front and center, right there with his incredible expanding hat size.