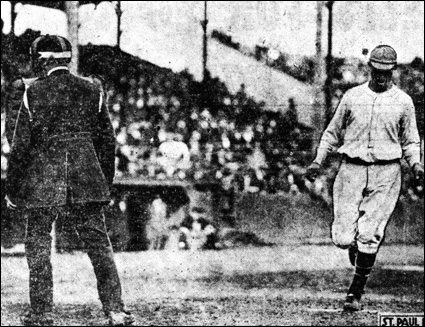 Photo courtesy of Roger Godin
Traded to the Yankees from the St. Paul Saints in 1925, Mark Koenig became the starting shortstop in the Bronx from 1926-29 and roomed with Babe Ruth.

OK, so we’re a little late. The 80th anniversary of the 1927 Yankees (best known as Murderers’ Row) sweeping Pittsburgh in the World Series to finish one of the most dominant seasons in baseball history passed a few weeks ago. Bet you didn’t know the Babe Ruth- and Lou Gehrig-led Yanks had a little-known Twin Cities connection.

Thanks to Roger Godin, the Minnesota Wild’s curator and a diligent baseball researcher, for pointing this out. Godin has submitted a paper to the Society for American Baseball Research (SABR) about Mark Koenig, the shortstop on that great Yankee team who previously played for the old St. Paul Saints.

Those Saints didn’t have pigs carrying baseballs or nuns giving massages, but they had national-caliber talent. Koenig’s big break came in 1924, when he came off the bench to spark the Saints to a dramatic Junior World Series championship over the legendary minor-league Baltimore Orioles. (The team was so revered that the major-league St. Louis Browns adopted their name in homage when it moved there in 1954.)

“I’ve been intrigued by it, and have been for a long time,” Godin said of the Koenig connection. “I knew Koenig had played here and played for, without too much argument, the greatest team ever assembled. But no one here knew that, or knew that his teammate, Chuck Dressen, went on to manage the Dodgers. To me, it was lost to history.”

Baseball historians considered those Orioles one of the greatest minor-league outfits of that era. The Junior World Series, begun in 1920, matched the winners of the International League and the American Association, the best leagues of their time. The Orioles won seven straight IL pennants from 1920 to 1926 and beat St. Paul in the JWS twice, in 1920 and ’22. But the Saints bested the Orioles in the best-of-nine 1924 series, coming back from a four-games-to-two hole thanks in large part to Koenig.

A 20-year-old utility infielder from California, Koenig started Game 5 in place of shortstop Danny Boone, who took a wayward throw in the head during batting practice. Koenig homered for the only run in a 10-1 loss that gave the Orioles a three-games-to-one lead in the series. (One game was a tie.)

Here’s the intriguing part of this tale. According to newspaper accounts Godin found, rules of the time allowed the Saints to replace Boone on the roster with a comparable player from any other team in the American Association. (Imagine the modern-day Red Sox replacing David Ortiz with Jim Thome for the World Series.) The Saints apparently had so little faith in Koenig that as the series shifted to St. Paul’s Lexington Park, they contacted at least three other shortstops to come play for them. None did, so they were stuck with Koenig.

But it worked out. In Game 6, the switch-hitting Koenig homered off future Hall of Famer Lefty Grove, who had already won twice in the series, and added a sacrifice fly in a 5-2 St. Paul victory. Baltimore took Game 7 and needed one more victory to finish off the Saints, but St. Paul won three consecutive elimination games to take the series. Koenig had three key hits in Game 8, and batted .429 with two homers for the series.

All that earned Koenig the shortstop job for 1925, but before the year ended, the Saints dealt Koenig to the Yankees for three players. By 1926, he was the Yankees’ regular shortstop. In ’27, he hit .285 and scored 99 runs for a team that won 110 games. Koenig was on third with a triple when Ruth, his roommate, hit his then-record 60th home run.

Gail Terry, Koenig’s daughter, cared for her father the last eight years of his life before he died in 1993 at age 88, the last surviving member of that Yankee team. In a telephone interview from her northern California home, Terry, 77, said she vaguely remembers hearing her father talking about that Junior World Series while playing cards with some buddies.

Her father, she said, never told her any baseball stories directly, even though she was a tomboy and loved sports herself. “My father talked about baseball all the time,” she said. “I was an only child, and a girl, and he wanted a boy.”

All photos are from the St. Paul Daily News and courtesy of Roger Godin.