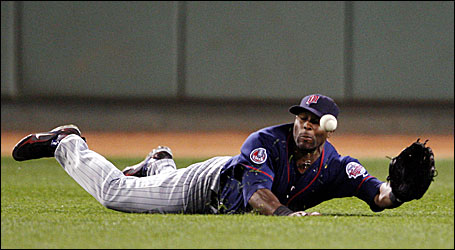 In the end, Torii Hunter‘s last months as a Minnesota Twin showed just how much of a Minnesotan he had become. The “negotiations,” or lack thereof, between Hunter and the Twins brimmed of passive-aggressiveness, so much so that Garrison Keillor could have narrated. The Twins never said they didn’t want him back, though they clearly didn’t. And Hunter never told the Twins to take a hike, not until agreeing to a five-year, $90 million deal from the Angels on Thanksgiving Eve.

And that’s the way it is from Lake Pohlad, where all the players are beautiful as long as they keep their mouths shut, and anyone above average is free to leave.

Nearly 20 years of covering major league baseball, mostly in Boston and New York, taught me one thing about free agency: Trust not what people say, but what they do. Actions are all you can go on, which is why the Twins have a massive credibility problem in their clubhouse — one that is about to cost them Johan Santana, and perhaps Justin Morneau and Michael Cuddyer as well.

Players doubt Twins’ commitment to win
For the first time, the players doubt management’s commitment to winning. This was evident from interviews I conducted in September while reporting a story on the future of the Twins for the New York Times, and candid conversations at other times during the season.

Words: New general manager Bill Smith called Hunter “the face of the franchise” and pledged to do his best to keep him. Actions: The Twins made an offer they knew Hunter would reject ($45 million for three years), leaked it to show they tried, and did nothing else.

This is no different than the Yankees offering Joe Torre a one-year deal with incentives, then trying to win the public-relations game, instead of simply firing him.

The Twins, with a new stadium coming in 2010 and baseball revenues rising every year, could have afforded Hunter if they chose to — backloading the contract to coincide with the stadium opening, deferring money, or doing something creative, perhaps guaranteeing four years with makeable incentives for a fifth and even a sixth. Hunter told me in September he might have considered four years at $56 million had the Twins proposed it early enough, though he apparently never told then-general manager Terry Ryan.

Santana, too, has his doubts
By September, however, Hunter had plenty of doubts about the direction the team was headed. So did Santana, thanks to the Luis Castillo fiasco. That’s why the Twins should have headed it off by going a year or two beyond their first offer, rewarding Hunter for meritorious service and leadership. There’s always risk with long-term deals, especially with players in their early 30s who play as hard as Hunter does. But keeping Hunter might have convinced Santana to quietly work with the Twins on an extension instead of asking for the moon, the stars and half of Hennepin County.

Instead, judging from local media reports, the same questions and doubts the players had in the final weeks of the season remain. When a team with only five productive hitters trades one in July for minor-leaguers, then lets a second walk away without a fight — a team that, by the way, was shut out a major-league-leading 14 times last year — while every other team in their division tries to improve, what are the players supposed to think?

Trading Castillo to the Mets on July 30, with the Twins seven games back in the AL Central and struggling to stay in the wild card race, read like a white flag in the clubhouse. “We didn’t get anybody back,” Hunter said in September. “We got A ball guys back. They can’t help us.”

Though Manager Ron Gardenhire, after sitting in Ryan’s office while he worked the phones, told players Ryan tried furiously to acquire a hitter, Hunter didn’t buy it. “If you try the day of the deadline, or the day before the deadline, you’re not going to get anybody,” Hunter said. “And you do it just to show everybody you did something? You don’t fool me.”

Letting Hunter go, when the Twins have no major-league-ready hitters in Class AAA, puts doubts in the heads of every other player with a decision to make. And doubts cost dollars.

Players who know management is trying to win are more willing to accept less than top dollar to stay. Joe Mauer was one. Travis Hafner agreed to a four-year, $57 million extension from the Indians — a deal finalized despite Hafner’s slow start — because he likes Cleveland, management respected his ability and leadership, and the Indians are good, winning the AL Central despite a payroll about $10 million less than Minnesota’s. Free agent Mike Lowell took three years to remain with the world champion Red Sox rather than four years from the Phillies.

But when the White Sox re-sign Mark Buehrle before the trade deadline, the Tigers pick up Pudge Rodriguez’s option, and even Kansas City bids for Hunter, while the Twins sit back and let their leader depart, the club’s priorities look skewed. One Twins official insisted Hunter wanted out all along, because he never made a counter-proposal. If that’s the case, Hunter conned his teammates and his manager, too.

Losing Hunter makes sense only if the Twins extend Santana, sign Morneau and Cuddyer to long-term deals, and add a bat, even if it means trading Joe Nathan and entrusting the closer’s job to Pat Neshek, Matt Guerrier or Jesse Crain. But then, are the Twins committed to winning, or saving money? That’s what their players, and the rest of us on the shores of Lake Pohlad, want to know.