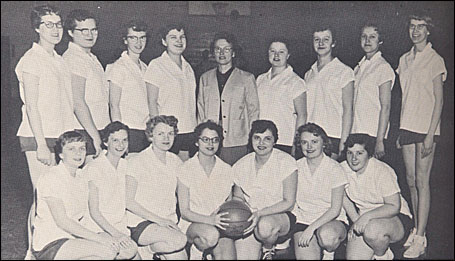 Several months ago, a letter arrived at Joyce Lundeen Wuori’s home in Minneapolis from Augsburg College, a school she had attended five decades before. The letter said someone had nominated her for the school’s athletic Hall of Fame. Because Wuori only attended Augsburg for two years and never graduated, she gave the letter junk-mail treatment.

So imagine her surprise when a follow-up letter arrived, telling Wuori that she and her teammates on the 1956-57 Auggiettes women’s basketball team would be inducted into the Hall — the first complete team, of men or women, honored in its 35 years.

“I almost fell over,” she said.

Salute to pioneer women’s team
Wuori and her teammates were pioneers, part of perhaps the first great collegiate women’s program in the Twin Cities. Long before Title IX and organized intercollegiate athletics for women, the team coached by the late LaVonne Johnson Peterson — lovingly known as “Mrs. Pete” to her players and Augsburg’s physical education students — dominated their competition from 1950 to 1968.

The 1956-57 Auggiettes went undefeated, playing against college and Minneapolis Park Board teams, one of Mrs. Pete’s 13 unbeaten seasons out of 18. They played home games in a Quonset hut on campus — that is, when the men weren’t trying to kick them out — and road games in gyms so tiny that spectators had to bring their own chairs.

Precise records are sketchy. The plaque honoring Peterson on the third-floor wing named for her at Augsburg’s Kennedy Center lists her career record as 160-6; newspaper and program clippings supplied by the school say it was 154-6. And no one, not even the players themselves, knows for certain how many games the 1956-57 team won. 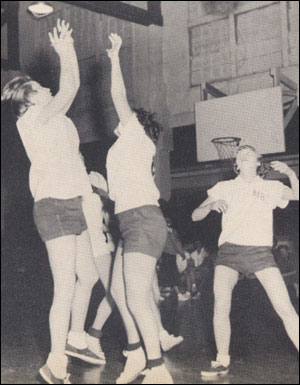 Photo courtesy of Augsburg College
Elaine Nelson, one of the team’s top scorers, shoots over a Minnesota Bible College defender.

But the Hall recognition is the latest step in Augsburg’s attempt to play catch-up with its women’s athletic history. Though the Minneapolis school expanded its women’s program in 1972 in response to Title IX, female athletes did not receive letters until 1989, according to Joyce Pfaff, the college’s first women’s athletic director. That oversight was corrected in September, when 78 former athletes received letters in a moving ceremony.

“When we were planning that event, not a lot was known about the ones who played, other than going through the yearbooks, because nobody really cared,” said Pfaff, still a physical education professor at the school. “They were locked out of the gym half the time, and nobody wanted them to play, so nobody wrote about them.”

So when the Hall decided to honor a woman this year, deciding whom to choose required more detective work. Honoring someone from the 1956-57 team made sense. It was the team’s 50th anniversary, the squad was one of Mrs. Pete’s undefeateds, and the letter-ceremony committee located nine of the 10 surviving players. (Three players have passed away, Pfaff said; only Carol Acklund remains unaccounted for.) 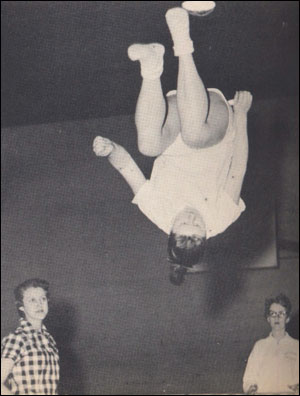 Photo courtesy of Augsburg College
Joanne Stiles, a 1958 grad who later became dean of women at St. Lawrence University, shows off on the trampoline while Elaine Nelson (left) and Aldy Johnson watch.

Team had lots of obstacles to overcome
In those days, the players weren’t treated like legitimate athletes. Mrs. Pete recruited almost all of them from Augsburg’s P.E. classes. They wore white blouses with no numbers and blue shorts, standard P.E. gear. There was no team bus; players had to bum rides to games. Jeanette Olson Locke’s father, Iver, taught Norwegian and theology at Augsburg, and she frequently borrowed his blue 1949 Plymouth.

“I’d put half the team in my car, then somebody else would have to rustle up a car,” Locke said. “My dad was never happy, because I’d never get back when he was ready to leave.” Locke’s son-in-law, former NHL great Phil Housley, probably never had this problem.

They played by the old rules, six players a side, with only three from each team allowed past half-court. Elaine Nelson Bernards, a 5-8 center, was a scorer, a skill she developed shooting at a basket on a pole at her country school in southern Wisconsin. Guard Aldy Johnson Hagen defended. “Last December, I had a hip replacement, and I was telling people it was a sports injury,” Hagen said. 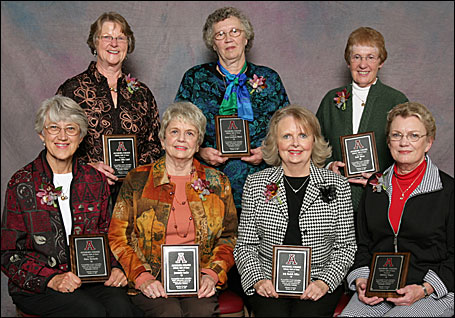 Instead of letters, players received trinkets Mrs. Pete paid for herself — Augsburg pins one year, silver and gold basketball charms for bracelets in others.

The players are all in their early 70s now, with grandchildren, reflecting on successful and fulfilling lives. Mrs. Pete died in 1994, but her influence remains. Hagen said she still has the wooden salad bowl Mrs. Pete gave her as a wedding gift in 1958. And the players all wore their pins and charms to the Hall induction ceremony in late October.

“She was my champion,” said Wuori, who left school in 1957 because her family could no longer afford the tuition. She eventually got her degree from Bethel, at age 50, after her husband, Edwin, passed away.

“It’s quite an honor that they remembered us, and I’m so glad to get my ‘A’,” Wuori said. “My son-in-law is tickled. He can’t get over his mother-in-law getting into the Hall of Fame.”