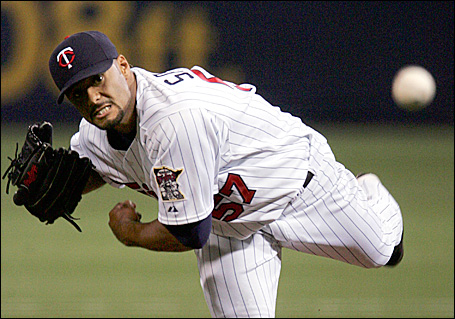 REUTERS/Eric Miller
Johan Santana’s eight-year stint as a Twin will end if he and the Mets can work out a satisfactory contract.

Bill Smith never had a chance.

In the end, the New York Mets were the only serious bidders for Johan Santana. They were the only ones with the wherewithal and the gumption to take on Santana’s contract extension demands, even though they offered the worst trade package of the three finalists.

Now, Smith, the Minnesota Twins general manager, is stuck with a center fielder many in the organization didn’t want, two pitchers who are no better than the ones they have, and an 18-year-old righty who, even if he pans out, can’t help the Twins until at least 2010.

This won’t inspire a rush to the Metrodome ticket window, and it shouldn’t. In New York, the story will be that Mets GM Omar Minaya outmaneuvered Smith and fleeced him for the best pitcher in baseball. Smith gambled that he could get the Yankees to the table, persuade Hank Steinbrenner to give up what GM Brian Cashman wouldn’t (Melky Cabrera, Phil Hughes plus another top pitching prospect) and either take that deal or use the leverage to pry prize outfield prospect Fernando Martinez from the Mets.

Twins’ trade leverage less than you’d think
But once the Twins and Santana decided to make the trade before spring training, whatever leverage Smith had vanished. Maybe he never had any leverage at all.

Santana’s agent, Peter Greenberg, has had a longstanding relationship with the Mets for more than a decade, when he represented Latin American players like Edgardo Alfonzo. His current clients include Jose Reyes, whom the Mets never planned to part with.

Minaya, a New Yorker of Dominican heritage, has been bold and aggressive in remaking the Mets into a team that challenges the Yankees for the New York spotlight. He likes stars – Pedro Martinez, Carlos Beltran, Carlos Delgado. And once he targets someone, he’ll ignore conventional wisdom and take whatever risks necessary to land him.

When the Red Sox refused to guarantee Martinez, the face of their franchise, the fourth year in a contract to stay – a prudent management decision for a pitcher of Martinez’s slight build and porcelain constitution – Minaya jumped in, offered the extra year, and landed him. Minaya got barely two usable seasons out of Martinez, pending this one, but the deal established the Mets and Minaya as players on the market. In many respects, the credibility was worth it.

Mets needed Santana; Yanks, Red Sox liked Santana
The Yankees and Red Sox might have liked Santana, but Minaya had to have him. Minaya couldn’t stand pat after the Mets’ historic collapse in September, and Santana’s demand for Barry Zito money didn’t faze him. The Mets can afford it. Like the Yankees, the Mets have their own television network now. Letting Tom Glavine go took more than $10 million off the payroll, and they’ll clear more money next year if Beltran departs as expected. And the Mets move into a new stadium in 2009.

Someone in the Twins organization, who declined to be identified because he wasn’t authorized to talk about negotiations, said two weeks ago the Twins would not trade Santana to the Mets unless they got Fernando Martinez. What changed?

First, the Yankees backed off. Cashman, at a joint appearance with Red Sox GM Theo Epstein in Wayne, N.J., last week, told the audience that the Yankees would not deal their young pitchers for Santana. So much for Phil Hughes and Ian Kennedy. Epstein never offered pitcher Jon Lester and outfielder Jacoby Ellsbury in the same deal, and there was no reason to sweeten the package if the Yankees were out.

That left one suitor, a running clock, and no choice.

In many ways, 22-year-old center fielder Carlos Gomez is a young Torii Hunter, a good defender with speed but wildly undisciplined at the plate. One Twins staffer, after watching Gomez swing from the heels at anything close in a series against the Mets at Shea Stadium in June, likened Gomez to Jacque Jones with less talent. That’s not good. The Twins need a leadoff hitter, and Gomez, who batted .232 with an abysmal .288 on-base percentage in 58 games for the Mets last year, isn’t it. Gomez should be Rod Carew’s spring training project.

Philip Humber and Kevin Mulvey are considered, at best, back-of-the-rotation guys. Humber’s best pitch is a Bert Blyleven-style curve. Deolis Guerra, a 6-foot-5 right-hander who will be 19 in April, was a late addition to the deal and the key for the Twins if he develops. In two years of Class A ball, Guerra was 9-14 with a 3.27 ERA.

If that sounds like an underwhelming package for a two-time Cy Young Award winner, imagine how Smith feels. Today, Minaya is the toast of New York. Smith, backed into a corner by Santana’s demands, has to hope at least two of these players pan out, or that Santana’s late-season swoon was an early sign of a physical breakdown. In two years, maybe Smith will look shrewder than he does now.