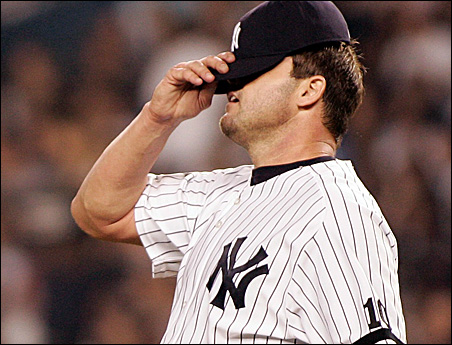 REUTERS/Shannon Stapleton
On Wednesday, Roger Clemens makes his pitch to a House committee.

Whether you believe Roger Clemens is a serial steroid user or the innocent victim of a smear campaign, get ready for a mangled syntax festival on Wednesday, when Clemens is scheduled to testify about the use of performance-enhancing drugs in Major League Baseball before the House Oversight and Government Reform Committee.

(ESPN is expected to begin its coverage of the hearings at 8:30 a.m.)

Those of you who have never heard Clemens speak at length are likely to learn what those of us who have interviewed Roger over the last 20 years already know: The seven-time Cy Young Award winner speaks a brand of English that can leave even the most erudite observer baffled,  confused or simply wondering what the hell just happened.

I covered Clemens in Boston for the Portland (Maine) Press Herald from 1988 to 1995 and again for the Newark (N.J.) Star-Ledger from 1999 to 2002, when he pitched for the Yankees. From dozens of interviews over the years, one-on-one and in groups, you learn that Roger has to be taped, because he talks too fast and too uniquely to be captured properly from handwritten notes alone.

Clemens a linguistic challenge for listeners
And even taped, Clemens provides a challenge. In one sense, he’s like the guy in your neighborhood who invents such a cool way of talking — phrases, nicknames, cutting remarks — that everybody else adopts it as their own. In baseball, Dennis Eckersley used to be that guy. Half of the cliches you hear on ESPN’s “Baseball Tonight” have their roots in Eckersley. What he called a “walk-off piece,” a pitcher heading to the dugout after serving a game-losing home run, is now engrained in baseball vernacular.

With Clemens, though, even a glossary of Texas slang doesn’t help. There was one memorable postgame interview as a Yankee when Clemens, discussing what pitches worked for him that day, began casually talking about “Mister Splittie,” as if we all knew what he meant. I never heard Clemens say that before, and it took a second for all of us to realize that Clemens had given a cute little nickname to his split-fingered fastball, like a kid with a favorite stuffed animal. I remember turning to another reporter and seeing the same mix of disbelief on his face that I must have had on mine, as in, “Did I just hear what I think I heard?”

If ever a guy is in danger of drowning in a stream of consciousness, it’s Clemens. When he gets rolling, he bounces from topic to topic within a single breathless sentence, leaving thoughts unclear or unfinished and open to an interpretation that almost always backfires on him. Former Boston Globe writer Ron Borges once called Clemens the Casey Stengel of the 1980s, the key difference being that the famed Yankees manager was actually funny.

In an infamous live television interview with Boston’s WCVB-TV in December 1988, Clemens — asked to comment on pitcher Bruce Hurst’s imminent departure as a free agent — attempted to criticize the Red Sox for not providing certain perks for players and families that other teams did. But he used “Boston” instead of “Red Sox” when referring to the team, and it sounded like he was ripping the city.

One month later, in an interview with the same station, Clemens said he didn’t appreciate reporters writing about his family and added, “Somebody’s going to get hurt one time doing that.” Then he waffled on whether he meant it as a threat. Fans ended up booing him on Opening Day 1989, and it took Clemens years to undo the damage. For a time, the Boston Herald made its reporters write a box block-quoting Clemens verbatim, an attempt to make him look illiterate.

That lack of clarity dogs Clemens to this day.

No doubt Clemens will be well-coached and prepared by his high-powered legal team. He’ll likely give stock answers to anticipated questions. But any deviation from the script by his interrogators could be problematic for Clemens, especially if he feels disrespected. He may respond with a meandering 2 ½-minute answer that could land him in more trouble.

Regardless of whether you think Clemens used steroids or not, this ought to be a good show. But I’m guessing we won’t hear about “Mister Splittie” this time.