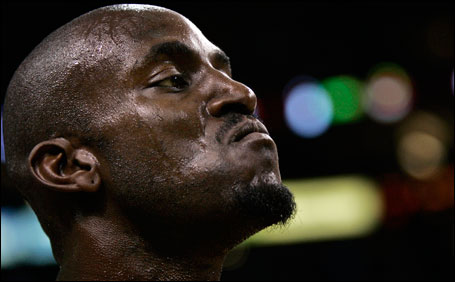 REUTERS/Adam Hunger
Disappointing homecoming: Garnett back at Target Center, but not playing Friday.

Some adult beverages and a couple of hot dogs: $40.

The opportunity to see Kevin Garnett, the former Wolves star in his only 2007-08 appearance in Minneapolis since being traded to Boston last July: Priceless.

Whoa, whoa, whoa. This isn’t going to work. Either as a credit card commercial or as a scenario to be played out Friday night when the Boston Celtics take the court at Target Center.

Garnett is coming to town, but the abdominal strain that has sidelined him for two weeks will prevent him from facing the Wolves and playing in his once-beloved ” ‘Sota”‘ wearing the colors of a rival team.

Garnett should be at game but not playing
All indications out of Boston are that Garnett will be present, in all likelihood a long arm outstretched to acknowledge what figures to be a loud and extended standing ovation at some point during the pre-game introductions.

But then, as is his habit when stuck in street clothes, the face of the Minnesota franchise for a dozen seasons is expected to head back to the visitors’ dressing room to watch the game on TV.

That’s why priceless no longer applies. Priced less, however, does.

At about 2 p.m. today,  a pair of premium seats to the Celtics-Wolves game — section 131, row 1 (center court) — could be had for $330 each. Pricey, sure, by working-man standards but business as usual in the NBA for that sort of real estate. A Wolves season-ticket holder pays $260 for that seat in a package price.

Bad luck for ticket brokers
“If KG was playing, we’d be trying to get $600 each for those,” said Brian Obert, co-owner of Ticket King, a Minneapolis ticket broker. “You have to remember, we paid a premium for those seats. So at $330, we’re probably taking a loss.”

Garnett suffered the injury to his stomach muscles on Jan. 25, late in the Wolves’ loss that night in Boston. As the severity became clear and his layoff stretched on, the back end of a very special fortnight — his return to play in front of fans who had raised him from a Timberpup — was jeopardized.

With the Celtics determined not to risk their MVP’s recovery by rushing him back, Garnett might not play again until after the NBA All-Star break Feb. 15-17. And since it is customary for players on extended layoffs to skip one-game road trips, there was speculation that Garnett might not even be in the building Friday night.

Now, with Boston coach Glenn “Doc” Rivers acknowledging the “special situation” (and the Celtics possibly getting encouragement from NBA headquarters), Garnett will be present. He joined the team on its flight Thursday afternoon to the Twin Cities.

Fortunately for Obert — but not so fortunately for someone who might have purchased tickets several days ago — Garnett’s status only became known in the past 24 to 48 hours. Had he incurred a broken bone or some other injury requiring a long recovery period of known duration, Ticket King would have been upside-down on even more inventory. Which it is now.

Wolves do about-face on single-game ticket
No kidding. The Wolves, which previously had offered tickets to the Boston game only to fans willing to buy seats to other games, had single-game tickets available on their website Thursday afternoon. At face value.

So six months after Minnesota finally legalized ticket-scalping, scrapping laws that had been in place since Woodrow Wilson was in the White House, supply outstrips demand for the hottest Wolves ticket in several seasons. The game will be a sellout, but not at the prices Obert or other street resellers expected.

“The Internet really changed the ticket industry a lot,”‘ Obert said. “Suddenly you could get a ticket to just about anything you wanted. It made the scalping law obsolete. And in Minnesota, there are very few sporting events where people will pay a premium anyway. The ones who make money there buy them for half-price and sell them for face.”

Probably too late now even for that, with Garnett wearing a sweater.

As a nod to Garnett’s injured status, and the boost that his anticipated return gave to ticket sales for Friday, the Wolves announced Thursday afternoon that all fans who attend the Boston game will receive a voucher redeemable for one ticket to a game later this month.


“While injuries are a part of the game and there is never a guarantee that any player will be in uniform, we recognize that this is a very special circumstance and share our fans’ disappointment at the prospect of Kevin not being able to participate,” Wolves President Chris Wright said in a statement.

Vouchers will be distributed as fans enter Target Center and will be redeemable for one ticket to one of the following games: Feb. 10 vs. Toronto, Feb. 19 vs. Philadelphia or Feb. 26 vs. Utah.