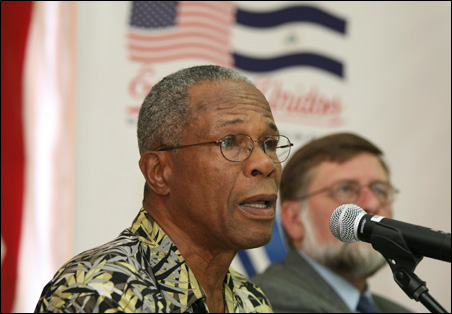 REUTERS/Oswaldo Rivas
Hall of Famer and former Twin Rod Carew speaks during an April news conference in Managua, where he took part in a baseball youth workshop.

The usual pantheon of Minnesota Twins greats, headed by Rod Carew, Harmon Killebrew and the omnipresent Tony Oliva, gathered at the Metrodome on Saturday for Rick Aguilera’s induction into the Twins Hall of Fame.

But something else brought Carew to Minneapolis last weekend, something much more important, and close to his heart.

Before Sunday’s game with Arizona, Carew was honored for his work with National Marrow Donor Program, a Minneapolis-based nonprofit that helps find matches for those in need of bone-marrow transplants. Carew’s daughter, Michelle, died of leukemia in 1996, when a suitable marrow donor was never found. That got Carew involved with the program, which was founded in 1987. On Sunday, program reps at the Dome signed up about 30 donors.

“I go to a lot of children’s hospitals, and I see so many of these kids that need the help,” Carew said Saturday in an interview with MinnPost at the Metrodome. “So I talk about it.

Daughter’s request spurs his continued campaign
“The most important thing that my daughter said to me when she was checking into children’s hospitals was, ‘Daddy, no matter what happens to me, I want you to continue to help these kids.’ So that’s what I intend to do.”

The need is great. Every year, about 10,000 people diagnosed with such life-threatening illnesses as leukemia need a marrow donor from outside their family. Though the program registry includes more than 11 million donors, and last year helped arrange for more than 3,700 transplants (its highest ever), more than 60 percent of patients who search the registry can’t find a suitable donor.

“What we have to get people to understand is, if you ever go to see a child, a recipient and a donor reunite, then you want to go do it the next day,” Carew said. “That’s how emotional a thing it is. I gave this person a second chance at life.”

Carew stressed that donating is not as painful or complicated as people may think. To learn more, or to sign up as a donor, go here. On the site, you also can read about the program’s upcoming tribute to Carew Sep. 18 at the Minneapolis Convention Center.

Several weeks ago, I tried to contact Carew on an unrelated matter — for this story about Joe Mauer. I wondered what Carew, a Hall of Famer and seven-time batting champion who also hit left-handed, thought of Mauer’s approach and swing.

Carew a Mauer fan and sees similar hitting styles
At the time, Carew was busy, and we never got to talk. So I asked him about it Saturday. Not surprising, Carew — a Twins spring training instructor and a former major-league hitting coach — sees a lot of himself in Mauer.

“We take the inside pitch and go to the opposite field,” he said. “We can take it to left center, we can go up the middle, we can pull it.

“Our swings are more controlled. We’re not overaggressive. It looks like there’s not a lot going on, but there’s a lot going on when the bat goes through the hitting zone, when our hands go through the hitting zone. That’s the only way I can explain it. You look at some hitters, and all the pieces are moving. With us, everything is so fluid, smooth, and we’re getting much better results than the other guys.”

(Mauer’s approach is paying off in another way, too. Thanks in part to a vote-for-our-guys campaign by the Twins, he has overtaken Boston’s Jason Varitek in the American League All-Star balloting for catcher. In totals announced today, Mauer now leads him by nearly 45,000 votes. Voting continues through July 2.)

And add Carew to the list of those who say Mauer shouldn’t alter his swing to hit more home runs.

“I like the approach that he uses the whole field,” he said. “He’ll be more consistent when he does that. People are going to say, ‘Well, he’s a big kid, he should hit home runs. Joe is still a young player. Maybe later on he’ll develop into hitting the ball out of the ballpark.

“But you’ve got to have one of those guys on your ballclub that, when you have runners on scoring position, you know that guy is going to drive the ball and put the ball in play and pick them up. Joe is that kind of hitter. He’s going to get the bat on the ball on a more consistent basis by staying from gap-to-gap than trying to hit home runs.

“Garret Anderson (of the Los Angeles Angels) was the same way. Garret, big kid, hit nine home runs, seven home runs and drove in 92 runs. So what was the importance right there? Sure, he could have hit 30 home runs and driven in 60 to 70 runs. As long as Joe is doing the job consistently, don’t worry about it. We’re all different kinds of hitters.”

• The next time Delmon Young visits those three wise men in the red robes, here’s hoping Tony Oliva tells him: “See ball. Bend over. Catch ball.” Sunday wasn’t the first time Young let a routine bouncer skip past him because he won’t, or can’t, reach down far enough. Manager Ron Gardenhire would be smart to stick Jason Kubel in left and make Young the DH until Young gets the message.

• Infielder Matt Macri, the Clive, Iowa, product who hit .367 in his just-concluded stint with the Twins, kidded that he deserves credit for the Colorado Rockies’ playoff run last year, though he never played an inning for them. The Rockies traded Macri to the Twins for Ramon Ortiz, who turned out to be the winning pitcher in Colorado’s 9-8, come-from-behind victory over San Diego in that one-game playoff for the National League wild card. “I take full responsibility for them making the World Series,” he said, deadpan. “I believe my trade was a psychological motivation … I’m joking.”

• The unspoken reason why Alexi Casilla remains at second base: The Twins have no one else athletic enough to handle off-target throws at the bag. That’s vital when your third basemen, Brian Buscher and Mike Lamb, throw the ball all over the place. Buscher’s poor throw to Casilla on Wednesday night cost the Twins a triple play, though Casilla still threw out Washington’s Paul Lo Duca at first to complete a double play.

Besides Twins Hall of Fame ceremony, Carew has another important reason for TC visit