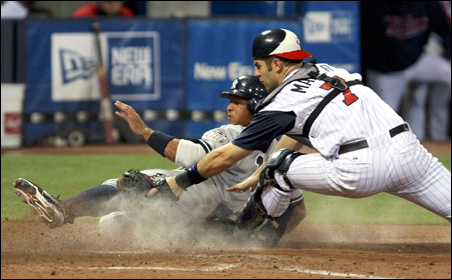 REUTERS/Eric Miller
Catcher Joe Mauer (shown in the Twins’ June 2 victory over the Yankees) considers calling a good game and hitting for average more important to the team’s success than home run power.

The pitch wasn’t a strike. A year ago, maybe even a month ago, Joe Mauer might have taken it without a second thought.

But in the seventh inning on June 2, with the Minnesota Twins trailing the Yankees 5-4 at the Metrodome, Mauer had an idea. Veteran Yankees lefthander Andy Pettitte mainly pitched Mauer inside his first three at-bats, preventing him from extending his arms the way he likes and limiting him to one single. With a 1-1 count, Mauer expected Pettitte to go inside again.

Pettitte did. And that’s why Pettitte was so upset after Mauer pulled the pitch for his first home run of the season, off the upper deck facing in right. Pettitte’s brutal honesty, which the nation discovered during the Roger Clemens/steroids controversy, surfaced again here as he described how Mauer outsmarted him.

“It was a critical mistake on my part,” Pettitte told assembled reporters in the hallway outside the Yankee clubhouse. “I gave him a chance to hurt me on the inside corner. He cheated to get to it, probably trying to take me deep.”

By “cheated,” Pettitte meant that Mauer had anticipated an inside fastball and reacted a fraction of a second early, intending to drive the ball — something Mauer and hitting coach Joe Vavra had been working on for several weeks. Pettitte had no way of knowing that, though.

“It’s as ignorant a pitch as I can throw,” Pettitte said. “I’d already shown it to him once in that at-bat.”

Two days later, Mauer — who had not homered off a lefthanded pitcher since 2006 — said Pettitte was right. “He was pounding me in inside all night,” Mauer said. “It was a pitch that was up a little bit, off the plate in, but I was kind of looking in there.

“Normally I probably wouldn’t swing at something like that, but he was in there quite a bit, and I felt like I could handle it. Certain pitchers you can take chances like that.”

Two homers in three days quiets critics — for now
That, at least temporarily, quieted the critics who rip Mauer for not hitting more home runs. It’s been a point of discussion ever since the Twins traded A.J. Pierzynski after the 2003 season and turned the everyday catching job over to Mauer, the low-key St. Paul product and the No. 1 overall choice in the 2001 amateur draft.

The Twins drafted Mauer over the often-injured Mark Prior in a cost-saving move; Prior’s agent, Scott Boras, wanted much more for his client than the $5.15 million signing bonus Mauer eventually accepted. That decision proved one of the best in club history.

Two years ago, Mauer hit .347 to become the first catcher to win a major-league batting title since Ernie Lombardi of the Boston Braves in 1942. Before Mauer, no American League catcher had ever done it. The Twins rewarded the arbitration-eligible Mauer with a four-year, $33 million deal.

Last year, a series of left leg injuries and a hernia limited Mauer to a .293 average in 109 games as the Twins slumped to their first losing record since 2000. Torii Hunter publicly questioned Mauer’s ability to play through injuries, which annoyed him, though he never criticized Hunter publicly.

“I’ve talked to him about it, and he told me it was kind of taken out of context,” Mauer said. “First of all, he’s never caught or had to deal with anything like that. It’s different. But there are things you can play through and things you can’t. If he knew how I was feeling, he probably would have known I play through pretty much everything.”

Healthy again, Mauer’s back among league-leading hitters
Healthy now, Mauer is contending for another A.L. batting title; his .324 average ranks second to Milton Bradley of Texas at .333. When Mauer won in ’06, he hit .452 in June, his best month. Mauer is off to a .379 start this month, which is his highest month so far.  He hit .298 in  March/April and .333 in May.

In the latest All-Star balloting, Mauer trailed Jason Varitek of the Red Sox by about 51,000 votes in the closest race at any American League position. Given Boston’s sellout attendance and national popularity, Varitek might hold on, leaving Mauer to perhaps be chosen as a reserve for the second time in his career.

Mauer’s average at the Metrodome (.373) and against lefties (.364) are up significantly over last year. Mauer has hit lefties so well that manager Ron Gardenhire no longer wedges the righthanded Michael Cuddyer between Mauer and Justin Morneau to break up the batting order.

“More than anything, I see consistent at-bats,” Cuddyer said in contrasting Mauer from last season to now. “There’s nothing different about his swing or his approach. But last year, he would play three weeks, then be out two weeks. Now he’s healthy and able to play every day.”

Getting the private and increasingly guarded Mauer to talk about himself can be like asking Derek Jeter who he’s dating this month. Mauer had a minor surgical procedure in the off-season that he declined to specify this spring. “It wasn’t baseball-related, but I feel better,” he said last week. “I had a lot of things going on last year. I’m just glad it’s behind me.”

That’s all the detail Mauer chooses to offer, because, he said, it isn’t anybody’s business. “It’s something that doesn’t need to be out there,” he said. “It’s not really relevant to anything. Just something I needed to take care of, and I got it taken care of.”

But bring up the one criticism Mauer hears the most — that, at 6-foot-5 and 230 pounds, he should hit more home runs than he does — and you’ll hear plenty of feedback from Mauer and those around him.

Twins officials maintained from the beginning that Mauer’s power numbers would jump once he physically matures. Mauer turned 25 on April 19. How much longer should Twins fans, or Mauer’s teammates, wait?

Instead, when it comes to the longball, Mauer has actually gotten worse. Mauer averaged one homer every 17.8 at-bats in his injury-plagued rookie season in 2004, and has never come close to that ratio since. He hit one every 40.1 at-bats in 2006, when he had a career-high 13 homers. His rate this year: One every 105 at-bats. Even last year, mainly hitting on one healthy leg, Mauer homered every 58 at-bats.

Now second baseman Alexi Casilla, who joined the team in May, has more homers than Mauer. And Casilla had two of his three before Mauer hit his first.

It might be less of an issue if the Twins stacked sluggers behind Mauer, who usually bats third. But with Hunter gone in free agency, Morneau remains the one 30-homer threat in Minnesota’s scratch-for-runs lineup. Seeing the White Sox bash 11 homers in their four-game sweep of the Twins in Chicago makes it even more noticeable.

“As he gets older, he’ll make the decision when he wants to start jerking the ball,” Gardenhire said of Mauer. “I don’t care about what people say in the stands, or with a pen and paper. If he’s hitting .350, leave him alone.

“I think it’s kind of nuts. People see a big guy and think he should hit home runs. I see a guy catching and leading the league in hitting. Heck, if he’s having success 33 percent of the time, what’s wrong with that?”

Added Morneau, Mauer’s friend and former roommate: “Honestly, I think it’s dumb. His job is to get on base 43 percent of the time. He sees a lot of pitches in an at-bat. If he was going to hit more home runs, he’d have to sacrifice average. Are we a better team with Joe Mauer hitting .250 with 20 home runs, or .330?”

Basically, because Mauer never considered himself a slugger, he never changed his approach to hit like one. Unlike so many homer-oriented hitters, Mauer rarely leans back and uppercuts the ball.

“What I try to do is simplify, go up the middle, and keep my hands inside, because that’s what worked for me,” he said. “There are times when I might take a chance, like I did the other night, and hit a ball to the right side like that. I’m not looking for pitches to go deep on. That’s when I get in trouble, start rolling over and making outs. That’s not what I want to do.”

By “rolling over,” Mauer means his wrists. When a hitter does that — usually, when trying to pull a pitch sinking down and away — it results in a weak groundout to an infielder. Is that what people want from him? Mauer thinks not, and finds the criticism off-putting.

Home runs less important than other ways to help team win
“I’m going to do what I do to help the team to win — driving the ball, getting on base, scoring runs. I kind of find it funny that so many people put home runs as being the most important thing offensively. It’s nice to hit home runs, but there are other ways to score runs.”

Still, pulling the ball deep more often is something Mauer quietly works on with Vavra, especially in small, early, batting-practice sessions at the Metrodome. May 19, the day after the Twins returned from a three-game series in Colorado, was one of those days. After several days where back spasms limited Mauer’s pregame routine — something he, and the Twins, kept quiet — Mauer joined the early group on the field about 3:30 p.m.

“He just keeps working,” Vavra said. “If you can’t learn anything by watching him, you’re missing the boat.”

With Vavra throwing, Mauer sprayed line drives all over, hitting balls where they were pitched. When Vavra threw inside, though, Mauer unloaded. Mauer ended one round by pulling the last three pitches hard and deep, one off the baggie, another off the football press box in right center.

Even if it’s not the hitter some people want him to be.