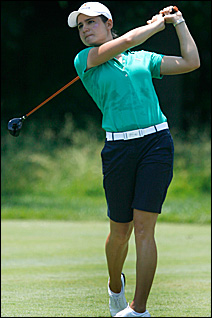 REUTERS/Tim Shaffer
The No. 1 women’s golfer, Lorena Ochoa (shown June 8 at the LPGA championship in Havre De Grace, Md.) will take part in the U.S. Women’s Open next week.

It’s one thing getting a course ready for Interlachen’s well-heeled members when the weather won’t cooperate. It’s another when you’re preparing for next week’s U.S. Women’s Open, in a year when it snowed the first week of April, and grass everywhere took forever to green up and grow. By mid-May, Rostal was still dealing with winter damage to the grass on three of his greens, Nos. 1, 11 and 16.

“Patience. That’s what I needed,” Rostal said late last week, explaining some of the behind-the-scenes logistics necessary for a national tournament. “It was so cold. You’ve just got to wait for the ground to warm up.”

Now, Rostal said, “Everything’s starting to pop.” Though the course remains soft from last week’s rains, club officials are more hopeful the fairways and greens will be in top shape for the Open than they had been.

A race with the weather
“If the tournament was the last week of May instead of the last week of June, we’d be really worried,” said Interlachen club pro Jock Olson. “But we’ve had enough good weather that everything’s looking really good.”

A few more sunny days, Rostal said, is all it needs. Practice rounds begin Monday, and tournament play runs from Thursday to the following Sunday. “I’d like it to dry up to firm the golf course up,” Rostal said. “The USGA wants firm fairways and greens, and I’d like to give it to them.”

If so, Interlachen — known for its undulating fairways and small, pitched greens — should be a tough test for a terrific field featuring Lorena Ochoa, the world’s No. 1 player; the soon-to-be-retiring Annika Sorenstam; defending champion Cristie Kerr; and such crowd favorites as Natalie Gulbis and Michelle Wie. The 6,789-yard, par-73 layout is the longest in Open history, and more than 200 yards longer than the course played for the 2002 Solheim Cup. (A fifth par-5 adds the extra stroke.)

As it did for the Solheim Cup, the club flopped the nines so that the usual ninth hole will be No. 18 for the championship. Why? Logistics, mainly. According to tournament marketing and promotions director Amy Lillibridge, No. 9 — which finishes just below the magnificent white stucco clubhouse — had more room for grandstands and hospitality areas, making it a more desirable finishing hole. So No. 9 is No. 18, No. 1 is No. 10, etc.

‘New’ No. 18 hole site of Bobby Jones legend
The championship No. 18, a 530-yard par 5 with a huge pond on the right, is the course’s signature hole. The legendary Bobby Jones, while winning the 1930 U.S. Open as the third leg of his Grand Slam, skulled a shot on the then-No. 9 hole that skipped across the water in the second round. It landed dry on the far bank short of the green, and Jones chipped up and made the putt for birdie. Spectators claimed the ball hit a lily pad, which Jones never confirmed, according to an account on a website established by Jones’ heirs. Nevertheless, a plaque on the course commemorates his famed “lily pad shot.”

As usual for one of its championships, the U.S. Golf Association asked Rostal to narrow the fairways and let the rough grow out, to put a premium on accuracy and shotmaking. Fairways that had been 28 to 35 yards wide will be 25 to 28 yards now. Three cuts of rough run from 3 to 6 inches deep; usually, it’s only 2-1/2 inches, Rostal said. The late spring challenged Rostal to produce rough that high, but Rostal is confident it will meet USGA specs. Three years ago, on its own, the club spent $3 million renovating its bunkers, moving many closer to the fairways to provide more of a challenge.

The greens, a mixture of creeping bent and poa annua grass, need to be faster, too. With twice-daily cutting, Rostal expects to reach the USGA-mandated speed of 11.5 on the Stimpmeter, which is quick.

The USGA prefers firm fairways and greens so tee shots roll into the rough, and players can’t bomb long or middle irons at the flag without fear of the ball scooting off the green. Imagine tossing a ball underhand onto a pillow instead of a hardwood floor. That’s the difference. Soft grounds and forgiving greens often lead to lower scores, and the last thing the USGA wants is someone shooting 25-under-par in one of its glamour events.

“Ideally, we want this to be the hardest test of the year,” said Mike Davis, the USGA senior director of rules and competitions, at a May 19 press conference at Interlachen. “But at the same time, we want to make sure that good shots are rewarded and bad shots are penalized.”

Rostal likes how the course finishes. The club built a new tee for No. 17, a 441-yard par-4 that Rostal thinks might be the toughest hole on the course. A big hitter like Ochoa could carry the two bunkers on the left, leaving about 140 to 150 yards to the pin. But the rest?  “The ladies are going to have a long, long shot going into the green,” he said.

No. 18, he said, could produce a lot of birdies for those daring enough to go for the green in two, over the Jones pond.

If it goes to a playoff, don’t expect the 18-hole drama of Tiger vs. Rocco. The women will settle things on Sunday in a three-hole, aggregate-score format, followed by sudden death if necessary.

Lillibridge said ticket sales have been so brisk that the USGA expects to break the Open attendance record of 131,000 for the week, set in 2005 at Cherry Hills outside Denver.  Tickets and tournament information are available there. Tickets may also be purchased at many Cub Foods stores or by calling 1-877-281-OPEN.