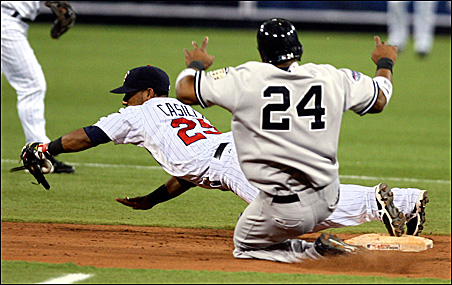 REUTERS/Eric Miller
The Twins’ Alexi Casilla hangs on to the ball for a forceout at second base during Saturday’s matchup with the Yankees at the Metrodome.

Last July 30, when the Twins traded Luis Castillo to the Mets and made Class AAA call-up Alexi Casilla the second baseman, then-general manager Terry Ryan compared it to the A. J. Pierzynski deal that cleared the way for Joe Mauer to become the everyday catcher.

Ryan’s skill as a talent evaluator earns him the highest respect throughout baseball, and the switch-hitting Casilla was one of his finds, plucked from the Angels organization for J.C. Romero in December 2005. But this was a stretch.

The move came about a week after someone in the Twins organization told me, “We don’t have position players down there who can help us right now.” It didn’t take long for Casilla to make the dignified Ryan look like a house shill.

In a little more than a month, Casilla made more mental mistakes than Castillo committed in his entire Twins tenure. Often, Casilla acted like he learned how to play baseball yesterday.

Twice on the bases, Casilla lost track of the outs, holding or retreating with two out instead of running hard on contact. On Sept. 3 against Cleveland, Casilla ran into an out foolishly trying to go from second to third on a grounder to short. That Little League mistake so angered Johan Santana, the starting pitcher, that pitching coach Rick Anderson walked Santana up the dugout runway to calm him down.

Manager Ron Gardenhire finally benched Casilla in mid-September after he showed up late for batting practice before a day game. Then Gardenhire named Nick Punto, a disaster at the plate until September, the early leader for the second-base job in 2008. That’s how quickly Casilla, from the Dominican Republic, played himself out of the club’s plans.

This spring, Casilla remained sloppy and inattentive in drills. He particularly annoyed Gardenhire during a March 10 exhibition against Florida. With a three-run lead in the ninth inning, Casilla attempted a needless spinning throw to second trying to start a double play instead of taking the easy out at first.

“He said to me, ‘I make that play all the time in the Dominican,’ ” Gardenhire said. “Well, you can keep making it in the Dominican. We don’t do that here.” Four days later, the Twins sent Casilla to the minor league camp.

So when the Twins recalled Casilla out of desperation on May 11, when Punto (strained left hamstring) went on the disabled list, they never expected what Casilla has given them — steady defense, a lively bat, a mature work ethic and no stupidity. Casilla’s three hits in Thursday afternoon’s 3-2 loss to Baltimore put his average at .323, though Orioles closer George Sherrill struck him out with the tying run at second to end the game.

Since becoming the everyday second baseman on May 19, Casilla has hit safely in 15 of 17 games, driven in 16 runs, homered twice and drawn as many walks as Carlos Gomez has all season (eight). When the Twins take early batting practice at home, Casilla is usually there, working on his bunting. Defensively, Casilla has two errors but appears much steadier on routine plays he often botched last year.

“He’s just more professional in everything he does,” Gardenhire said. “He’s done as good a job trying to understand what we’re talking about as any young player.

“It’s amazing. We didn’t know when he came back what we were going to get. But he’s been pretty incredible for us. He’s been a huge spark, the whole package.”

Now, Casilla says the notion of replacing the popular Castillo last year terrified him, especially knowing many of his new teammates criticized the deal.

“Luis is one of the best,” Casilla said in an interview with MinnPost on Wednesday morning. “They traded Castillo to make me the second baseman. I said, ‘Wow, I’ve got to be like Luis Castillo now. I have to play like he did.’ When you try to do too much, things are not going to be easy for you.

“Last year, I put too much pressure on myself. I was trying to be too fine. Right now, I’m just trying to relax.”

It took Casilla a few weeks after his spring training demotion to understand what he needed to do; he was hitting only .219 at Class AAA Rochester when the Twins recalled him. “I was feeling kind of down at the beginning,” said Casilla. “Later, I figured out they made the right decision. That made me work to try to get better. That makes me a better player.”

And the Twins couldn’t be more pleased. Or surprised.  “It’s all on him,” Gardenhire said. “He’s the one who figured it out.”

• This week again showed the difference between a big-budget team and one which counts its pennies.

After the Yankees wore out their bullpen Saturday night while beating the Twins in 12 innings, the club flew in Class AAA reliever Scott Patterson from Rochester (where they were playing the Twins’ farm team) for Sunday’s game and designated backup infielder Morgan Ensberg for assignment. That meant eating Ensberg’s $1.75 million salary, which is like a mozzeralla stick to a club with a payroll pushing $210 million.

The Twins, meanwhile, left town Thursday night with 13 pitchers and a three-man bench because they refuse to release the ineffective Juan Rincon, who makes $2.475 million—a Thanksgiving turkey to a team with a $62 million payroll.  Until the Twins rectify this, expect to see more bizarre improvisation from Gardenhire like Thursday, when Kevin Slowey pinch-ran for Mike Redmond in the eighth.

• Former Twin Paul Molitor, who played at the University of Minnesota, said Thursday he is lobbying the Pohlad family to become the name sponsor of the proposed new Gopher baseball stadium. Molitor said the Pohlads haven’t responded yet.

• The Yankee series did not provide the attendance boost the Twins had hoped. The four-game series drew 114,276, with only one crowd over 35,000. Through 35 dates, the Twins are averaging 24,235, still about 3,000 a game fewer than last year at the same point (27,603). Curiously, the Twins entered Thursday ranked a surprising sixth among the 14 American League teams in total attendance because they’ve played more home games than anyone else—the benefit of that front-loaded schedule. In average per game, the Twins are 10th.

• Right fielder Michael Cuddyer had as many assists on this seven-game homestand as the Twins had homers (four). Why do teams still run on this guy?

• A guy named Slowey pinch-running for a catcher … nah, that’s just too easy. “He had about a one-foot lead,” Redmond said, smiling. “I know I could get a two-foot lead. But whatever.”