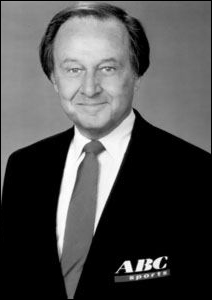 Courtesy of the Museum of Broadcast Communications
Jim McKay

Growing up in Chicago, a city of stick-and-ball sports as well as big shoulders, I came late to ABC’s “Wide World of Sports.” Compared with a steady diet of Cubs, Bears, White Sox, Blackhawks and Bulls, “WWOS” was an acquired taste, and those early black-and-white offerings (in our house anyway, deep into the 1960s) of running, swimming, cycling, equestrian and figure-skating events were the equivalent of steamed veggies to my grade-school palate.

It was the neighbor kids who ultimately put me onto “WWOS.” The McDermotts, across the street, were doers rather than watchers, way more into individual pursuits than team sports, as competitive at Stratego and Mille Bornes as they were on any court or field. With a demanding dad who made Karl Malden’s portrayal of Jimmy Piersall (“Fear Strikes Out”) seem as laid-back as Perry Como, this family was way ahead of the curve on stuff like personal bests and being all that they could be. Far as I was concerned, the Army stole the slogan from the McDermotts.

It helped, too, when I parked a few times on the living-room floor and saw that “WWOS” wasn’t just Soap Box Derby — it was Demolition Derby. Not just diving from some concrete platform in Mission Viejo but, just as often, diving from the treacherous cliffs high above Acapulco. “WWOS” was big on spanning the globe to bring us the constant variety of sport, sure, but sometimes it took us no farther than Harlem for the Globetrotters vs. the hapless Washington Generals. And if you sat through enough Alpine skiing, you just might catch a segment on ski flying, which is how we all came to know and cringe for Vinko Bogataj and his rough landing near Oberstdorf, Germany, in March 1970.

Through it all, from the anthology series’ debut in April 1961 to its final broadcast in 1997, we had Jim McKay. McKay, who died Saturday at age 86 at his farm in Monkton, Md., was the glue of “WWOS,” the genial and enthusiastic host who made us curious about the show’s many offerings because he was curious, who made us care because he seemed genuinely to care.

Personality and tone just right for any sports story
As rare, unusual and, let’s face it, dubious as some of the sports were — barrel jumping on ice? Evel Knievel soaring over 15 Greyhound motor coaches? — it would have been easy for McKay to turn into a carnival barker, barging into our homes with Howard Cosell’s bombast and one of Lindsey Nelson’s screaming plaid sports jackets. Instead, the former newspaperman from Baltimore played against type; it was his personality, his nature, to keep the tone light, to find the fun and to respect the hard work and dedication even of the marble shooters.

That’s why ABC sports impresario Roone Arledge hired McKay in the first place. “Some people . . . can make something dramatic by the inflections of their voices, without shouting,” Arledge once said. “Jim’s not just somebody yelling at you. He has a sense of words, a sense of the drama of the moment.”

That’s what worked, with bobsled runs, with hydroplane racing, with wrist wrestling. McKay found ways to make even chess exciting.

Like the McDermott kids and me, most people knew McKay through the glass screen and tinny speaker of the family TV set. But Jay Weiner, another former Star Tribune writer, covered the Olympics, the other arena in which McKay excelled. He got a little closer than the rest of us, and shared his thoughts Sunday:

“To me, McKay was the glue to Olympics telecasts, especially after I began covering the Games in 1984,” Weiner wrote in a note. “When a reporter is in the Olympics milieu, the biggest challenge is to get a feel for the overview, for the totality of the Games. I have always said – and told less-experienced journalists – ‘Let’s cover the Olympics; let’s not cover the events.’ You need a bird’s-eye view to keep track of the real themes and threads of a Games and the rhythm that develops – or doesn’t – over 17 days.

“In 1988, I was covering my second Winter Olympics and third Olympics total. I had been in Sarajevo and Los Angeles and, of course, when you’re on site, you don’t actually watch much TV. But in ’88 in Calgary, because of the time differences (and before Web-based news distribution), my writing time was pretty much done by 11:30 p.m. Mountain Time; by then, the Star Tribune’s deadlines had passed.

“So at the end of Day 3 or Day 4, I sat down at the Media Village – in a pre-fab structure in a temporary trailer park on a small college campus – for a beer with a friend of mine. There was a TV there, with ABC doing a late-night wrap-up show, and there, talking to us as if he were in the room, was McKay. There were highlights from one event, then from another and another, and McKay was sewing it all together.

“My friend and I turned to each other and almost simultaneously said, ‘Hey, the Olympics are on!’

“We were there. We were running from one event to another. We were proud of the slices-of-life stories we were sending back to our offices. But Jim McKay took it all and told the overarching story, theme, painting of that day in the Olympics. We were overmatched.”

Sportscaster McKay perfect in news chair for Munich tragedy
Everyone seemed overmatched by the events in early September 1972, when McKay was called on his day off from the Munich Games with news that Palestinian terrorists had kidnapped 11 Israeli athletes in their Olympic Village dorm. He anchored – not as a sportscaster but as a news reporter – ABC’s coverage through the night, until a commando raid to free the hostages went horribly wrong. After a shootout and an explosion at the Munich airport took the lives of all hostages, McKay broke the grim news. “They’re all gone,” he said.

McKay spoke proudly of receiving a letter from Walter Cronkite, praising his work that day. The late Peter Jennings, assigned to the 1972 Olympics as an ABC reporter, told the Baltimore Sun in an interview some years ago: “I’ve often said to folks that on that day in Munich, I don’t think anybody better could have been in the chair. I’ve never been able to imagine anybody else doing it with as much grace and intelligence and precision. I sometimes wonder whether Jim ever got enough credit for his career.”

Accolades poured in for McKay’s Munich performance, including Emmy Awards for both news and sports. For a generation of sports journalists eager to be taken seriously, McKay’s work was a pre-Watergate watershed moment. In that crossover move from Bob Costas to Ted Koppel — what McKay later called “the end of the age of innocence in sports” — he showed that the very best folks from the toy department could handle the hardest of news.

McKay was smart, he was literate — he read A.E. Housman’s poem, “To an Athlete Dying Young” at the closing ceremonies in Munich — and, no doubt, he would be out of place today as sportscasters give themselves verbal hernias trying to invent self-aggrandizing catchphrases. Yet his words during the “WWOS” introductions — the thrill of victory, the agony of defeat — are as famous as anything ever said in a sports broadcast.

His three words near the end of the around-the-clock nightmare in Munich are, too, in what started as a sports broadcast but turned into something altogether different.