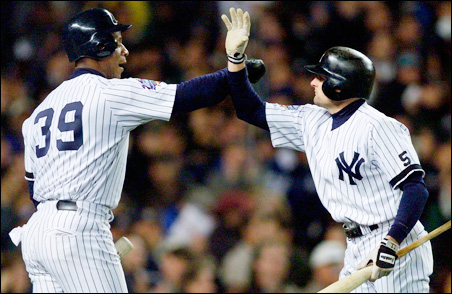 So much has happened to Darryl Strawberry in the 12 years since he resurrected his baseball career with the independent St. Paul Saints. Success. Addiction. Recurring cancer. Divorce. Jail.

Strawberry said he tries not to think about the worst, all the chances he wasted, all the things that could have killed him long before Tuesday’s event, when he sat on a riser at the Crowne Plaza hotel in St. Paul as the honored guest at the American Association All-Star Game luncheon.

“I was spared for a reason,” Strawberry said near the end of a question-and-answer session with KSTP Radio’s Kris Atteberry. “All the things I had to deal with, there was something which I was called for. I used to think it was about baseball. It’s not. It’s about who I can help.”

Three years ago, living in St. Louis with his third wife, Tracy, Strawberry visited a school for autistic children where Tracy’s sister worked. What he saw, and learned, stunned him. These were children who could be uncontrollably violent, whose parents did not dare leave them with a babysitter, children who in some cases could not even be hugged.

So Strawberry and his wife started the foundation that bears his name, raising money to try and provide the specialized care these children need. A golf tournament last year raised $100,000, and another one is coming up. This, Strawberry said, is his calling.

It used to be something else. That road was littered with so many detours and crash sites that it’s tough to summarize in a few sentences.

In May 1996, with legal charges pending in California (he owed child support to his first wife, Lisa), Strawberry landed in St. Paul. The Yankees, whom he played with the year before, had interest, but Strawberry needed to show he could still hit. Saints’ board chairman Marv Goldklang, also a Yankees limited partner, gave Strawberry a job and a uniform.

Wearing No. 17, Strawberry played 29 games as a Saint, batting .429 with 18 homers and 39 RBI. He hit a mammoth homer at Wade Stadium in Duluth, the length of which, as Atteberry tells it, grows 10 feet with each passing year.  For a little more than a month, Strawberry was a latter-day Twin Cities version of Willie Mays, who hit .477 for the Class AAA Minneapolis Millers in 1951 before the New York Giants called him up.

The Yankees purchased Strawberry’s contract on the Fourth of July, George Steinbrenner’s birthday. He went on to earn three World Series rings in the Bronx (1996, ’98 and ’99) before cancer and cocaine addiction finished his career.

“I never really got the opportunity to tell them, thank you,” said Strawberry, meaning Goldklang and Saints owner Mike Veeck, whom he publicly thanked at the luncheon. That’s why Strawberry agreed to return as the honorary captain of the North Division All-Stars. Tuesday night, the crowd of 6,330 at Midway Stadium gave him a standing ovation. (The North could have used Strawberry’s bat; the South won, 11-4).

Strawberry’s overriding memory of St. Paul remains how well the fans treated him.

“It was really fun,” he said in a brief session with reporters before the luncheon. “They were very warm people, and they have a very special place in my heart . … There was no other feeling, for a very long time, where you find people who welcome the players. They have a lot of fun. Usually at ballparks, they’re yelling at players.”

At the luncheon, Strawberry added that fans even said please and thank you when asking for autographs, which he found refreshing. “In New York, they didn’t say that,” he said.

In 2005, Strawberry returned to the Mets as a special instructor, a job he takes seriously. Strawberry stopped by the Midway Stadium press box during the game, and when the conversation turned to the Twins, he asked: “How’s Gomez doing?” Carlos Gomez, of course, is a former Met farmhand. Strawberry added part-time television studio analyst duties this year — 18 games, matching his old Mets number.

He’ll be back at Yankee Stadium Aug. 2 for Old Timers Day. Until then, he has work to do for his foundation.

• The Saints’ grand plan to use instant replay on close calls in the All-Star Game had to be scrapped last week. Best Buy Mobile provided the technology, in which replay video would be streamed into a mobile phone carried by the plate umpire. But according to Saints spokesman Sean Aronson, Best Buy couldn’t guarantee a crisp enough picture.

• Playing to Saints’ minority owner Bill Murray at the luncheon, Strawberry predicted the Cubs would win their first World Series in 100 years. “Everybody up!” Murray yelled, leading the standing ovation. Added Strawberry: “I hope there aren’t any Boston fans in here, because we can’t stand Boston.” That stems from 1986, when Strawberry’s Mets beat the Red Sox in the World Series.

• Twins closer Joe Nathan, who grew up just north of New York City, kept two souvenirs from the final All-Star Game at Yankee Stadium: His spikes, and the dirt on the bottom of them. Nathan said players with shoe contracts get a fresh pair for the All-Star Game, and Nathan said he made sure clubhouse attendants did not clean his spikes. “They’re headed to Tennessee,” said Nathan, meaning his off-season home.

• This ever happen to you? Twins manager Ron Gardenhire, during an All-Star Break camping trip with his wife, absent-mindedly walked into a sharp side of his motor home while checking the wires. (Cue Homer Simpson sound effect.) After explaining it to a few people, Gardenhire couldn’t resist a wisecrack. “I was talking with Francisco Liriano’s agent and went…,” he said, pretending to whack himself in the head. Yeah, it was a joke.