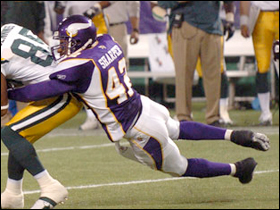 A day in pro football without nutritional supplements, meanwhile, apparently would be like night without orange juice. Or much of what we think of as the standard, smash-mouth, superhuman NFL.

“Supplements are a thing that definitely helps out the players,” Minnesota Vikings veteran safety Darren Sharper told me the other day. “Your body breaks down so much from the wear and tear of the games and the length of the season that you have to use something. Whether it’s amino acids, protein, anything, to kind of give yourself a little extra energy and lessen your body breaking down.”

Supplements were in the news this week after Vikings defensive tackles Pat Williams and Kevin Williams were named in a Fox Sports report out of Denver, alleging that the two were among eight NFL players testing positive for a prescription diuretic. If true, the two Vikings could face four-game suspensions for violating the league’s anti-steroids policy, because the drug (bumetanide) is on the NFL’s list of banned substances for its ability to mask steroid use.

Players and fans speculated about the pressure on players such as the Williamses — Pat is listed in the team’s media guide at 317 pounds, Kevin at 311 — to meet the coaches’ mandated weight limits on a weekly basis, while the two Vikings declined to address the allegations directly.

But ingesting something a little extra is a part of pro football’s culture, as surely as body shaving is to Olympic swimmers or Ben-Gay is to construction workers. From protein shakes, power bars and mega-vitamins, it seems only a small step to diuretics. (Bumetanide, by the way, is a far more potent drug than the “weight-loss supplement” described in published reports about StarCaps, the product yanked out of distribution by its producer since the story broke. And it is no recent addition to the banned list — head scientist Larry Bowers at the U.S. Anti-Doping Agency told the Associated Press that bumetanide has been off-limits for at least 20 years. Any NFL investigation of this latest case remains behind closed doors.)

“It’s so hard to limit the supplements,” said Sharper, in his 12th NFL season and fourth with Minnesota after eight in Green Bay. “You have to think about what category that you’d put everything in. You’ve got vitamins. You’ve got stuff in food that you could consider supplements. You’ve got creatine — that’s in steak.”

A random stroll through the Vikings locker room over the lunch hour Wednesday revealed enough supplement bottles and jars to stock the shelves of a health-food store. Everywhere you turned there was a “___somine” this or a “____droitin” that, with powders, pills and liquids — all presumably permissible — in plain view. Each player’s dressing stall also has a small cabinet with a wooden door for valuables and private items, so there’s no telling what sat behind those.

Among the supplements in Sharper’s space was a bottle of Musashi Amino Acids, EAS Active Repair softgels and a bottle of Pedialyte.

The NFL is an enterprise that wants — and rewards — bigger, faster, stronger, harder. A league in which, 25 years ago, a 300-pound lineman was a novelty — think William “The Refrigerator” Perry — now boasts hundreds of them. The Vikings’ roster has 14 such players; the Houston Texans — who visit the Metrodome Sunday — have 10. These larger-than-ever bodies hurtle toward each other, and smaller foes, in violent collisions that require all of them to replace, repair and recover. So it’s supplements, evidently, or a bye week in between every game.

“That’s the nature of guys trying to get an advantage,” Sharper said. “Adding a little more weight, it’s just mass times force, that Newton equation. The more mass you have, you’re going to be able to push that other guy out of the way. Guys know that, so that’s why guys might hit the weights a little bit more, guys might eat more to put on more pounds.”

Then there’s the march of time, Sharper said. Statistics that show human beings getting bigger with each generation, not to mention Americans getting larger with each drive-thru meal. “Ten years ago, I came into the league, I probably was one of the biggest cornerbacks,” said the William & Mary product, who is listed at 6-2, 210 pounds. “Now you’ve got a lot of cornerbacks coming in at 6-2.”

Still, it makes you wonder: Hasn’t this all just raised the floor? Never mind that supplements — as a way of coping with a policy against steroids — seem like methadone to heroin addicts or near-beer to a self-treating alcoholic. If everyone is using them — in fact, feels pressure to use them — doesn’t it negate that quest for an advantage?

I asked Sharper what the NFL might look like if, via a gentlemen’s agreement, all its players avoided even legal nutritional boosters.

“If we just cut out everything? I’d think we’d see tired football games,” he said. “Tired. Guys would be moving a lot slower. More achy. Guys wouldn’t recover as fast for the next game.”

Would players be smaller? “Probably so. You wouldn’t notice it [right away] but over the long haul, you would.”

That’s the limbo in which the league finds itself now, choosing between how low it will go vs. how small it might get.

NFL craves its supplements to avoid that tired, run-down feeling