The Vikings trailed the Chicago Bears on the scoreboard Sunday, in the standings this morning and for the foreseeable future in their respective quarterback projects.

I would have used the more common “controversies” label, except that the Bears, as evidenced in their 48-41 victory over the Purple at Soldier Field, seem safely past that point in Kyle Orton’s development from signal-caller and clock-manager to pass-completer and playmaker.

Rex Grossman these days is feisty but undersized road kill in coach Lovie Smith’s and offensive coordinator Ron Turner’s rear-view mirrors, Orton growing — and growing more comfortable — in the job with each (literally) passing day. The baton has been passed in what had been Chicago’s crazy QB relay, dating back really to the days of Jim McMahon, and Orton finally looks to be the anchorman for this and several seasons to come.

Vikings’ QB debate may be burning issue again
In Minnesota, it hasn’t been a baton so much as a torch — from Tarvaris Jackson to Gus Frerotte and, soon enough, maybe back again — with both ends burning. Not that  outraged villagers will have any trouble finding a firm grip, grabbing torches and pitchforks alike to storm Winter Park during what looms as an especially long fortnight through the team’s bye week. A quarterback controversy might, in fact, be a welcome diversion at the Eden Prairie headquarters, given the “Fire Childress!” alternative. 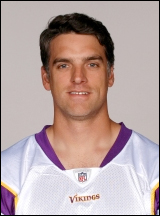 That’s what you get, though, when your franchise lags behind the Bears — not the Patriots, not the Colts, not the Giants, but the Bears — at the NFL’s most important position. Chicago’s parade of alleged passers, through the years, has been like the first episode or two each season of “American Idol,” with an endless procession of William Hungs getting the hook. So being worse off than the Bears at quarterback is like trailing Wall Street in consumer confidence or Amy Winehouse in rosy-cheeked wholesomeness.

It wasn’t just that Orton flew straight and true in this one, completing 21 of 32 passes for 283 yards as Chicago amassed its most points in nearly 22 years. It wasn’t that Frerotte, in going 25-for-40 for 298 yards, threw four interceptions into a Bears secondary hobbled by injuries. It was that they happened simultaneously, with the 25-year-old newbie outplaying the 37-year-old vet. And it was that, as Orton continues to blossom the way Jackson was expected to, Frerotte is just Jeff George revisited, a temp worker with a name and a yellowing resume to cover up his team’s otherwise empty cupboard.

Orton, who has thrown 10 touchdowns and four interceptions this season, has a 91.4 quarterback rating after Sunday’s impressive 114.5 performance. Frerotte’s numbers so far: five touchdowns, seven interceptions and a 72.6 rating (62.3 in Chicago). He still is in the black, 3-2 since taking over for Jackson, but heading the wrong direction. Orton, meanwhile, has both a future and a team that believes in him, a little more each week.

“Making all the right decisions, distributing the ball,” Smith said of Orton in his postgame remarks. “[He] is playing well. It seems each week he’s taking another step, and that’s what you like to see.”

Bears tight end Desmond Clark noticed Orton’s improvement a while back. “It’s not just last game or the last couple of weeks,” Clark said earlier this month. “You saw it coming into training camp that he wasn’t a guy who was going to baby-sit the offense. He can run the offense like we want it run.”

Not only is that progress individually, it’s progress toward something collectively. Orton already has Chicago, at quarterback, where the Vikings were supposed to be by now. Coach Brad Childress stayed committed to Jackson right up until he wasn’t — just two games into the season. Now he’s losing anyway, with a stop-gap guy under center, while restless fans wonder if Jackson’s confidence is shakier than the coach’s job status.

Plenty of reasons for Sunday’s loss
There were myriad reasons for the loss Sunday, including punter Chris Kluwe’s throwback impersonation of a frantic Garo Yepremian and Chuck Gordon’s wrong-headed contact with a punt, each of which handed Chicago a touchdown. Frerotte’s interceptions were lethal, ultimately, and in its own small way so was the encroachment penalty on defensive tackle Fred Evans just before halftime. That shaved five yards off what became a 48-yard field goal for a kicker, Robbie Gould, who never had booted one from more than 50 yards.

When so many mistakes riddle a team’s effort, the natural reaction among fans is to look to the top for leadership lacking or decisions done dumb. No surprise, then, that in a poll on the Fox29 postgame show, the percentage of respondents urging that Childress be fired started at 75 percent and climbed to 80 within the hour. Meanwhile, a Chicago Sun-Times poll reported that 54 percent of folks clicking on its website cited Orton’s emergence at quarterback as the most significant thing about the Bears’ victory. Over at the Tribune, in its “Who Da Man?” poll, Orton was getting 67 percent of the vote, compared with the unknown, unproven cornerbacks at 29 percent.

Poor Bernard Berrian. The Vikings wide receiver did catch six balls for 81 yards and a fourth-quarter touchdown in an emotional first game back to Soldier Field. But he said several days earlier that he signed with Minnesota over the summer because he had grown tired of the Bears’ QB mess.

“It was hard being a receiver over there,” he told Chicago reporters last week. “There was so much — let me see, what’s the right word to say — it was a carousel. It was a quarterback carousel. So it’s hard to get rhythm with a quarterback and really know what you’re going into and what you’re looking at.”

The view now can’t possibly be any better.