COLLEGEVILLE – John Gagliardi apologized, needlessly. Though never a screamer in his 56 seasons as head football coach at St. John’s University, Gagliardi’s voice sounded thin and raspy after practice on Tuesday, which he attributed to old age (he’s 82) and stress.

Stress? What stress? Gagliardi  has coached more seasons (60 overall) and won more games (460) than any coach in college football history. No other coach has been inducted into the College Football Hall of Fame while still active. And his Johnnies, after a rare poor start, are one victory from clinching the Minnesota Intercollegiate Athletic Conference title and their 10th NCAA Division III playoff appearance in 11 seasons.

Even if the Johnnies lose on Saturday at Carleton College in Northfield, the Benedictine monks that run St. John’s won’t fire him. So what’s Gagliardi got to be stressed about?

Losing, and the rare possibility of being on the wrong side of history.

Since former Johnnies quarterback Kurt Ramler took over the Carleton program in 2006, however, the games have been much more competitive. The Knights lost 29-19 in 2006, the closest result since 1990. Last year, in a driving rain at Carleton’s Laird Stadium, the Knights actually led 7-3 with less than four minutes to play. But St. John’s drove 72 yards, converting a key fourth-and-five along the way, to win on a one-yard TD run by Mike Patnode with 56 seconds left.

So much for the intimidation factor. Now Carleton, 7-2 overall and 5-2 in the MIAC, can clinch its first conference title since 1992 and an automatic NCAA bid if Ramler can beat his former coach. The losing team, with three losses, probably shouldn’t expect an at-large berth. 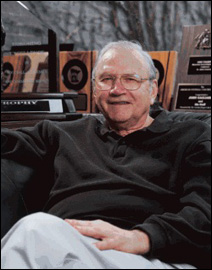 This year, so has Gagliardi and his longtime staff. This is Gagliardi’s weakest team in a while. He lost record-setting quarterback Alex Kofoed, who graduated, and returned only nine starters, four on offense. Then defensive lineman Nick Gunderson of Woodbury, a preseason All-American and the Johnnies’ best pass-rusher, tore up a knee in the opener and was lost for the season. The Johnnies opened 1-2 in conference play for the first time since 1990, losing to Concordia by three points and nemesis Bethel by five.

Four consecutive victories, one at St. Olaf in overtime, enabled the Johnnies (7-2, 5-2) to tie Carleton for the conference lead.

“Obviously, it didn’t go how we wanted it to go,” running back Jeff Schnobrich of New Ulm said of the season’s start. “Fortunately, things have fallen our way with other teams in the conference, and we’re getting to play for the conference championship. We win, we’re in.”

Gagliardi’s methods and coaching quirks have been chronicled in four books and hundreds of newspaper and magazine articles. Tuesday, cold and sleet forced his standard 90-minute practice inside, which he abhors. Players still call him “John,” no one on his staff uses a whistle, and he still carries 3 x 5 index cards in lieu of a bound playbook. His son Jim, the offensive coordinator, held up one of the cards before the Johnnies ran a new a play, requiring some players to lean in and squint. The no-cut roster is “down” to about 150, from 184 last year.

Exactly how often Gagliardi has coached against a former player is uncertain; it’s about the only bit of Gagliardi trivia not found in the Johnnies’ ultra-detailed media guide. Bob Sullivan, a former Johnnie, went 0-18 coaching Carleton from 1979 to 2000.

Carleton matchup pits Gagliardi against former assistant
Last month, we introduced you to Ramler and Carleton after the Knights’ 4-0 start. Ramler remains a big name in Johnnies’ lore. The 1996 MIAC most valuable player, Ramler held Johnnies’ records for passing yardage and touchdown passes until Kofoed broke them. He still owns the three best single-game passing totals, topped by a 435-yard performance against Gustavus in 1996.

Ramler, who coached quarterbacks for Gagliardi in 2002, modified some Gagliardi stylings for Carleton. Most Knights practices go 90 minutes or less, like Gagliardi’s. Ramler has a playbook, but it’s thin, just the basics. When practicing a new play, Ramler skips the visual aids. “We use Carleton intellect,” he said. “I explain it, and we run it.”

Carleton throws the ball a lot more than St. John’s does, from a spread offense with no tight end. Thanks in part to quarterback Shane Henfling’s 29 touchdown passes, the Knights lead the conference in scoring with 287 points. St. John’s is No. 1 in overall defense and No. 2 against the pass.

“I told John, I hope the last game of the year has playoff implications,” Ramler said in a phone interview from the school’s Northfield campus. “That was the plan.” To have it actually fall that way, Ramler said, “is pretty cool.”

Meanwhile, on the pastoral campus in the woods near St. Cloud that Ramler knows so well, his old coach frets about his voice and the biggest game of the year. Ramler learned one other thing from Gagliardi: The difference between expecting to win and expecting victory. The former requires confidence, which is essential. Presuming the latter is the surest way to lose. So Saturday, Gagliardi isn’t presuming anything, especially after last year’s near-loss.

“That’s been my life,” Gagliardi said. “Play a game, and if we win, thank God we avoided the bullet.”